Today's the Seventh Day of Christmas 2018 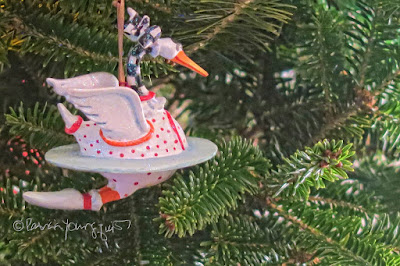 It's The Seventh Day of Christmas, the day (according to a song) when someones's true love gave to them seven swans a swimming, six geese a laying, five golden rings, four calling birds, three French hens, two turtle doves and a partridge in a pear tree.

The web-page for 12 Birds of Christmas has this to say about the bird type who represents the Seventh Day: "... Swans are birds of elegance and mystery. Seven represents mystery and elegance, largely in part to the movement of the seven planets [only seven were known until 1846]. Planets moved unlike all the other stars and had their own intricate patterns – nothing was more elegant and mysterious. Swans a-swimming represent Water, another of the four life-giving elements."

In honor of Christmas's Seventh Day, I've posted my photo of an ornament based on today's occasion.

[Followers of this blog may recognize the image as it is included in my 2017 and 2016 blog entry re Christmas's Seventh Day.]