One hundred and three years ago on this day in 1915, Édith Piaf was born. Followers of this blog may recall that her singing was a a favorite of my dearly departed friend, Donna De Solis, and that Piaf's rendition of La Vie En Rose, which  she is singing in the video atop this entry is one that I used in a memorial DVD which I created in honor of Donna's memory at the request of her son.

I've just learned via a comment (by Joshua F) on this You Tube video that "La vie en rose literally means life in pink. It's a French expression roughly equal to 'rose-colored glasses', but without the negative connotation of the English expression. It's about seeing the world in a brighter and more idealistic way- directly in the context of the song, this is because of a lover, but because it was released in 1945, it served to soothe and inspire a France still recovering from the horror of Nazi occupation.﻿"

Prior to my reading the comment I had read in a Google search "La vie en rose literally translates to Life in pink and it would be better translated to life through rosy (pink) glasses. The idea is to depict a state where everything appears rosy and cheerful to you. It's about a state of bliss when everything around you is a source of joy..."

I often hear Piaf's haunting rendition of La Vie En Rose coming out of a boom box that is attached to the bicycle of a NYC cyclist, Frank, who is pictured below. 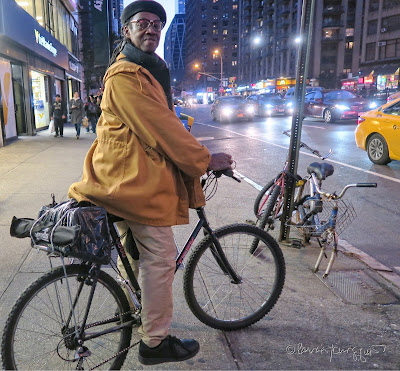 I've so associated hearing Piaf singing La Vie En Rose with Donna, that I've forgotten that she is often referred to as "the little sparrow," as she was so small in stature.


.... are all thrilled to be associated with Piaf as often their bird type takes somewhat of a hit with certain Bible references.

In any event, sparrows are featured in my Words In Our Beak book series.

Purchase info for them can be found after the conclusion of this post.

As for Édith Piaf's legacy, I could say so much more and maybe I will as time goes by, for now I'll leave you with a quotation attributed to her: "When you reach the top, you should remember to send the elevator down for others."

EACH OF THESE BOOKS CAN BE ORDERED FROM ANY PLACE SELLING BOOKS BY GIVING THEM THE TITLE, OR ISBN, OR MY NAME, PATRICIA YOUNGQUIST.
ADDENDUM SEPTEMBER AND OCTOBER 2021:
When the third volume of the hard-cover version of Words In Our Beak was released, I withdrew from promoting my former versions of Words In Our Beak.
The very first one is an iBook and went into Apple's book store in 2015.

Its press release can be read by clicking here.
Now with the release of BIRD TALES (which is in Apple's Bookstore and On Amazon)...