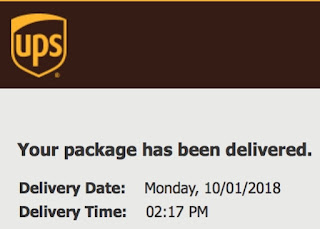 As you may know, dear reader, in a few of my recent posts here on Blogger, I've been discussing the fact that I've been expecting the delivery of a copy of volume three of my Words In Our Beak book series, which has been delayed. Yesterday it finally arrived.


But after doing so much work with the book's editor and formatter, Chris Deatherage (CD) on the last volume of the series, and then anticipating the book's arrival, I'm not pleased to make this announcement for this ninety-sixth segment of my Tuesday's Truths series; and, frankly am exhausted, so I'll just share a copy (orange font) of the email that CD sent o the publisher. This will give you an idea of the status of volume three.

Yesterday, Patricia received our printed copies of Words In Our Beak, Volume Three (ISBN 9780996378543), and we are puzzled by several things.

First, the book set up clearly states "blue cloth cover," yet the copies we received are gray. As this is the final story in a trilogy, the cover must be the same as the first two. How could this mistake have been made? (See attached images, WIOBv3_Print-setup.jpg and WIOB-series-cloth-covers.jpg.) 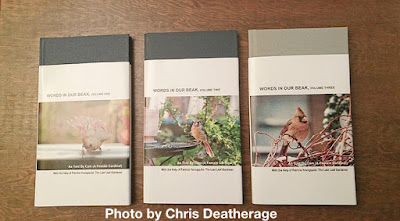 Second, it appears that each page of the book interior was double printed because there is a faint drop shadow on all of the text that also makes all of the text appear in boldface. I'm not sure how well you can detect this fault from the attached images, WIOB-v1n2-final-print.jpg and WIOBv3_PDV-vs-Print.jpg, because the binding restricted the ability of the flatbed scanner to neatly capture. FYI, the Volume 3 image shows the page from the PDF file which was uploaded to create the book's interior on the left, with the print version on the right. The difference in font weight is clear, the ghosting not so much. Why would this happen? It also seems to have the effect of making the images darker and duller.

Third, the premium color paper used in these copies of Volume Three appears to be from different stock than the first two volumes. The paper for Three appears to have a gray-ish tint to it (which I think also contributes to the darkness and dullness of the images), whereas One and Two appear to be pure white. Is the company unable to obtain the same paper used in the earlier volumes? Or did the press room simply choose the wrong paper? By the way, it also feels a little more coarse than the paper in the earlier volumes.

Until we can resolve these issues, Patricia does not want the book to be purchased by dealers or individuals. We attempted to remove it from sale via the dashboard but were unable to find how to do so. What we did do, to buy time, was to select an on sale date in November.

We both appreciate the time it will take you to research these issues and look forward to a speedy resolution, as Patricia would like to get the book out as soon as possible.

There are many reasons I'm very grateful to know CD. He was certainly kind and diplomatic in his efforts to advocate on my behalf. I might not have been so kind a I'm very upset about their mistakes.

This is mostly because someone who is visiting NYC from California had planned to show volume three to an UWS book store and arrange for them to do an event re my series. She and I intended to do this last Saturday, but because the arrival of the book was delayed, we were unable to have our meeting with the event planner.

Now, after seeing the condition of the book, I am so discouraged and disappointed. Moreover, she will  most likely not be in the city when I receive a corrected copy. I'm truly struggling to make ends meet and this makes things even worse.