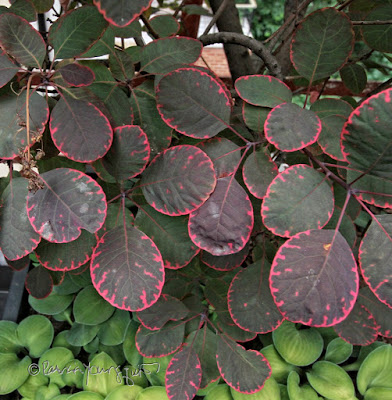 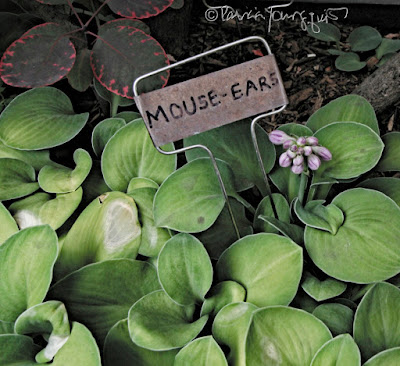 Here's a piece of trivia for this next to the last Saturday in June:

"National Pink Day is observed annually on June 23rd. This day is set aside for the color pink and all it represents."*

As for my rooftop garden, the pink trimmed leaves on my Smoke Bush represent protection for my Mouse Ears! AND The Mouse Ears (mini hostas) are in bloom again!

My mini hostas are already beginning to flower which is something that doesn't usually occur until midsummer!

These plants prefer part to full shade, which are not the conditions in my rooftop garden, however the foliage of my Smoke Bush seems happy to oblige by using her now pink-trimmed foliage to shield the mouse ears from direct sun.

National Pink Day is also a good "excuse" to reflect on the Muscovy duck who has pink features as seen in the next set of images.

The Muscovy duck seen here is one I first encountered when I was near the 79th Street Boat Basin (on the Hudson River in NYC) this past fall (which is when I took pictures 1-3) and I featured her in a number of entries here on Blogger.

I am happy to say I saw her again this past Saturday, when it was unseasonably hot and she was catching some shade on a pier at the same Boat Basin (as seen in the last picture).

I've been told her name is Jewel and that's very appropriate as she certainly seems to be a jewel!
Maybe I can persuade Cam to include her in volume three (which we hope to have available this September) of the Words In Our Beak (WIOB) book series.

*More info re National Pink Day can be found by clicking here.