On September 20th 2017, when I took a  walk for pleasure in Central Park, (at someone's advice), I came across an array of animals including the turtles seen below. 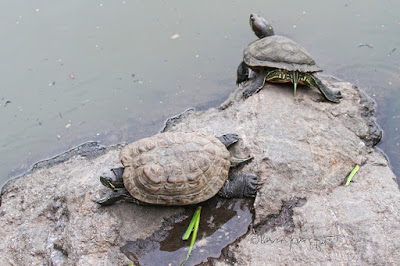 Observing creatures puts me in a better frame of mind. However, Central Park was far from relaxing on that day. This is because there were a number of barricades and detours, due to an event that was set to occur in the coming days; however the turtles did not concern themselves with the chaos, their wisdom was not lost on me.
Posted by The Last Leaf Gardener