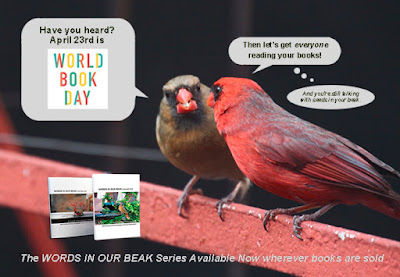 This past March 1st, a Twitter trend was that it was #WorldBookDay, but I've just learned that today,  April 23, 2018 is also World Book Day!

I received the notification from my web-designer, Chris Deatherage, who also edited and formatted both volumes in the Words In Our Beak book series, seen in the image below.


And with the notification, Chris included the image atop this entry (as you may recall he has created business cards and press releases for both books).

Because I knew that World Book Day had been celebrated this past March, I checked out his news tip, and sure enough, on this day of April 23rd, folks will once again celebrate this unofficial holiday!

According to  Wikipedia, "World Book Day or World Book and Copyright Day (also known as International Day of the Book or World Book Days) is a yearly event on April 23rd, organized by the United Nations Educational, Scientific and Cultural Organization (UNESCO), to promote reading, publishing and copyright. In the United Kingdom, the day is recognized on the first Thursday in March. World Book Day was celebrated for the first time on 23 April 1995.

"The connection between 23 April and books was first made in 1923 by booksellers in Catalonia, Spain. The original idea was of the Valencian writer Vicente Clavel Andrés as a way to honour the author Miguel de Cervantes, first on October 7, his birth date, then on April 23, his death date. In 1995 UNESCO decided that the World Book and Copyright Day would be celebrated on 23 April, as the date is also the anniversary of the death of William Shakespeare and Inca Garcilaso de la Vega, as well as that of the birth or death of several other prominent authors.[2] (In a historical coincidence, Shakespeare and Cervantes died on the same date — 23 April 1616 — but not on the same day, as at the time, Spain used the Gregorian calendar and England used the Julian calendar; Cervantes actually died 10 days before Shakespeare died.)"

A great way to  celebrate this day is get either volume (or both) of  Cam's book series, you can see that her husband, Mac (at the left in the photo atop this entry) is telling her that they need to get everyone reading her books; let's help them out, dear blog reader, by trying to get everyone to read the Words In Our Beak series!