Tonight marks the 90th year of "handing out" Oscars in an Academy Awards ceremony that takes place in Hollywood. I've heard that some people jump up and down re this event, and Cam (the cardinal seen in the picture atop this post) is no exception!

Last year she persuaded me to write a blog post about the Hollywood fanfare and the movies I've created (especially the ones that feature her).

Images taken from some of my movies are included within my "Oscars poster" (which can be seen in the image directly below). 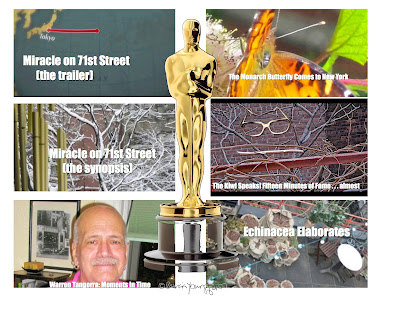 As we all know, the stories told in books are often rendered into movies, and don't tell Cam, but I think she hopes that her story will be picked up by someone in the entertainment industry for a feature film!

Who am I to discourage her?

Volume One (seen in the next image) of her book series, Words In Our Beak, has received high praise from those who have read it and the files for Volume Two (seen in image after that are now in the hands of the publisher.

Cam is very optimistic (much more than I) and when she's not indulging in black-oil sunflower seeds or peanuts, she's already preparing her academy award speech.