My Tales of Hoffman 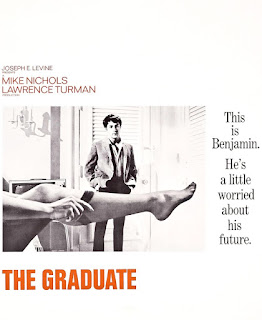 According to a number of tweets (where I saw the image atop this entry), The Graduate, premiered fifty years ago today on December 22, 1967, which happened to be a Friday, as it is now.

At this time, Dusin Hoffman, one of the film's stars, has been in the headlines for over a month related to a matter other than this movie. His presence in the news is due to the fact that allegations against him for sexual misconduct and harassment, have been made by at least three women, including Kathryn Rossetter.

Rosssetter worked with him in the 1980's Broadway production of Death of a Salesman, in which she played The Woman From Boston, while Hoffman played the salesman, Willie Loman.

I had auditioned for the role of The Woman From Boston at the request of Dustin Hoffman, whom I met by chance while working at a restaurant on the UWS. I had only been in NYC a few years at that time. When I was first employed at the restaurant my aspirations were to work in the fields of writing as well as photography.

However, after I landed my position, I discovered my "wait-staff colleagues" were in the performing arts profession, and I concluded that acting (which I had been interested in as a youth) was something I could do in order to make money to pursue my aforementioned passions.

I didn’t take long to get started. I had my head-shots done and started taking classes. I worked the breakfast/lunch shift in order to free up my afternoons for classes and auditions.

On one particular morning, I had more difficulty than usual getting ready quickly for work and spent too much time staring into my coffee, losing track of the time. When I'd become cognizant of how much had elapsed, I realized I would need to take a cab to my job if I wanted to get there by the shift start time of 6:30AM, which IHMO, is more of a time to be drinking coffee than serving it to others.

Thankfully, when I hurriedly approached the southwest corner of Broadway and the street where I was living at the time, a cab came to a screeching halt. I hopped in and noticed that the driver had camouflaged the entire roof of his taxi with his own head-shots. I wondered if he had procured any auditions from his “decorating” endeavor...

Once inside my place of work, I saw that a lone customer, a man, had settled into a large booth at the back of the coffee shop. The woman I worked with suggested, “You take that first customer while I finish setting up this work station.”

The man remained behind his copy of The New York Times as he told me that he was waiting for someone, and the restaurant's manager insisted that I inform him that booths were for parties of three or more, and that he’d have to move if his guests didn’t arrive soon — even though he was the only customer in the entire place. Soon the lone customer was joined by another man.

“That guy looks like Dustin Hoffman,” I commented to my co-worker. She informed me that it was Dustin Hoffman; and immediately, I cursed myself for having gotten up too late to put on make-up.

I headed to the table to take their order, but, inspired by my cab driver's decor, I made a detour to the locker room to see if I had any of my head-shots with me, thinking this might be a good opportunity for me to be discovered...

He then informed me that he would be doing the play Death of a Salesman on Broadway, handed me a business card of a production company, and told me to call them to let them know he wanted me to read for the role of The Woman from Boston!

Fast Forward: As I was preparing for that audition, I read something in Death of a Salesman that related to another character in the play (Biff, one of the salesman's sons) which reminded me of a painful incident that happened to me (involving my father) as a child; and it offered me a bit of insight. But I knew I could not get sidetracked by concentrating on Biff Loman.

Besides, my audition for the role of The Woman From Boston was the first time I had ever auditioned and I had enough anxiety and focusing was of the upmost importance, so there I was, on the stage of a Broadway Theatre, performing my lines with Dustin Hoffman, while Arthur Miller (the playwright) and Robert Whitehead (the producer) watched from the audience. I nearly missed some of my lines because I was wobbling in high heels that I was wearing for the first time, but Hoffman pointed the lines out to me; and at the conclusion of my audition, Whitehead said my "eyes were shining to the back row."

The following day when I working at the restaurant, I told Suzanne Farrell (a famous ballet dancer), who was another one of my customers, about the audition. I confided in her that something in the play was reminiscent of a disappointment that I had regarding my father, and also of a disappointment that he had regarding me. Farrell then told me, "if you don't get the part maybe it's because you only needed to have light shed on that incident in your past, and not relive a trauma eight times a week for the duration of the show."

At that time, I wondered why I couldn't have my insight, and be offered the role that ultimately went to Rossetter. Meanwhile, I contacted my father to arrange to meet with him to tell him about my insight into my childhood reaction (and his ultimate response) to his infidelity that had led to his divorce from my mother and to his marrying the equivalent of his "woman from Boston." I asked him to tell his wife about my personal epiphany. That year he sent me the following Christmas card: 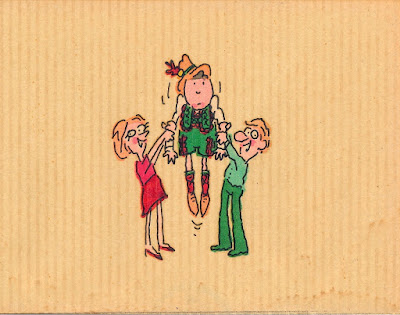 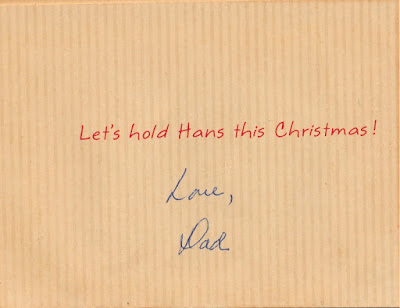 In any event, my audition for Death of a Salesmen, was the last time — until these recent Hoffman allegations — that I heard Rosetter's name; and when I recently heard her account (via social media venues) of what supposedly occurred during that production, I thought of Farrell's remarks to me about going through trauma eight times a week.

As for Dustin Hoffman, I had never heard of any of the behaviors cited in the recent news. I've only seen him one time since my audition, which was on the set of Family Business (directed by Sidney Lumet), where I played a nun (as seen in the picture below). 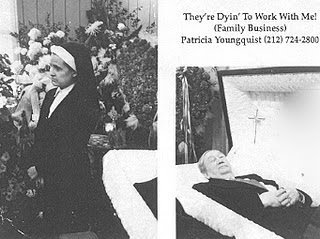 Hoffman came over to where I was standing on the set and said hello to Bill McCutcheon (who is the winking corpse in the photograph above) as well as to me and to tell us we were having too much fun. This concludes my Tales of Hoffman.
Posted by The Last Leaf Gardener