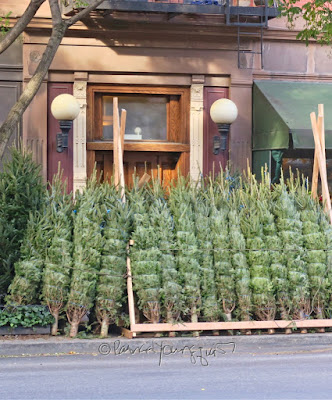 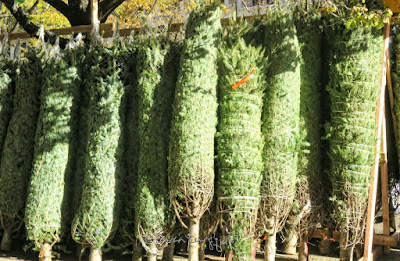 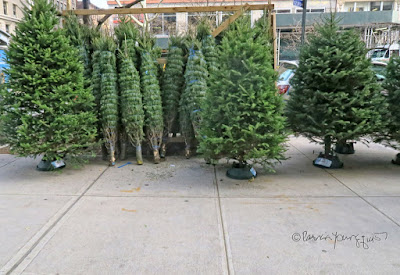 Welcome to week sixty-fifth of my Tuesday's Truths series, dear reader! I wanted to let you know that this past Thursday, The Macy's Thanksgiving Parade had barely finished before NYC began to see more tree-lined streets, as evidenced in the images atop this blog post.

With the exception of the first image, the pictures feature Christmas trees that are brought down from by French-Canadians who dominate New York's Christmas tree market.

Their article goes on to proclaim, "Hired in Montreal, these folks are the most temporary of migrant peddler—Québécois who visit our pavement from the day after Thanksgiving through Christmas Eve every year.... if the trees simply came from the same forests as their traffickers, the mystery would be solved. Long ago, when Canada was the cheapest source of Christmas trees, that was the case. But today, even though the country is the world's greatest exporter of the product, North Carolina's tree farms provide many of the city's evergreens (and the state claims to provide about a fifth of trees nationwide). And the company that dominates the market, Forever Evergreen, is incorporated in Florida . It's only the staff that is foreign, setting aside their dignity to speak English in compensation for the five to ten grand they bring home for their month of work...

...they are 24-hour operations, although few customers come after midnight. But when your business is only open for one month out of the year, it's important to clock as much overtime as possible. While firm numbers are hard to come by, it's been estimated that by the time Christmas Day arrives the average stand will have made around $30,000."

This article has many other interesting facts re the French-Canadian take over when it comes to Christmas trees, and once again, here's the link.

In any event, during bygone years, I've made barter/arrangements with a French-Canadian, who is known as Sébastien. He's gotten fabulous Christmas trees for me to put in my garden so I can decorate them with bird feeders, and I've designed materials for his stand/or blogged about him, in posts which you may reference by clicking here.

Be that as it may, Sébastien did not come to NYC this year and I'm not sure if I will get a Christmas tree. In prior years, I only get one as a place for my visiting birds to stay warm and so that I can hang bird feeders on it. But this year I might not he one.

In addition to Sébastien not being in the city, I'm  very concerned about the effect Christmas trees have on the environment once the season to be jolly has passed, I try to donate mine to mulch stations whenever possible, but that doesn't always work out. Maybe this year I'll think of a work around re a Christmas tree that's for the birds. Stay tuned!
Posted by The Last Leaf Gardener