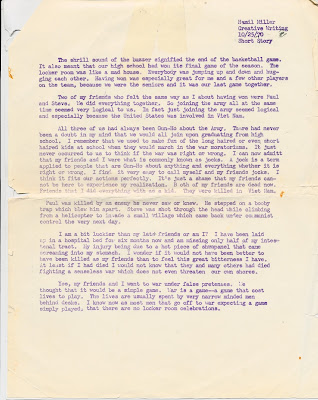 I've already posted an entry for today as part of my Wednesday's Wisdom series, however, I didn't want the day to pass without sharing a memory of Hamil Miller. Miller authored the essay posted atop this entry in jpeg format, but also below, as jpeg's are hard to read.

The shrill sound of the buzzer signified the end of the basketball game. It also meant that our high school had won its final game of the season. The locker room was like a mad house. Everybody was jumping up and down and hugging each other. Having won was especially great for me and a few other members of the team, because we were the seniors and it was our last game together.

All three of us had always been Gung-Ho about the Army. There had never been a doubt in my mind that we would all join upon graduating from high school. I remember that we used to make fun of long-haired or even short-haired kids at school when they would march in war moratoriums. It just never occurred to us to think if war was right or wrong. I can now admit that my friends and I were what is commonly known as jocks. A jock is a term applied to people that are Gung-Ho about anything and everything whether it is right or wrong.  I find it very easy to call myself and my friends jocks. I think it fits our actions perfectly. It's just a shame that my friends cannot be here today to experience my realization. Both of my friends are dead now. Friends that I did everything with as a kid. They were killed in Vietnam.

Paul was killed by an enemy he never saw or knew. He stepped on a booby trap which blew him apart. Steve was shot through the head while climbing from a helicopter to invade a small village which came back under Communist control the very next day.

I am a bit luckier than my late friends or am I?  I have been laid up in a hospital bed for six months now and am missing only half of my intestinal tract. My injury being due to a hot piece of shrapnel that came screaming into my stomach. I wonder if it would have been better to have been killed with my friends than to feel this great bitterness I have. At least if I had died I would not know that they and many others had died fighting a senseless war which does not even threaten our own shores.

Yes, my friends and I went to war under false pretenses. We thought that it would be a simple game. War is a game — a game that cost lives to play. The lives are usually spent by very narrow minded men behind desks. I know now as most men that men that go off to war expecting a game to be simply played, that there are no locker room celebrations.

Miller's essay dated 10-25-1970 was something he wrote for a school assignment. Miller died in a horrific car crash soon after giving it to his teacher. He was a high school senior at the time.
Posted by The Last Leaf Gardener