Sunday's Statements: The "odd warty growths" (One Side-Effect of Being a Muscovy Duck) 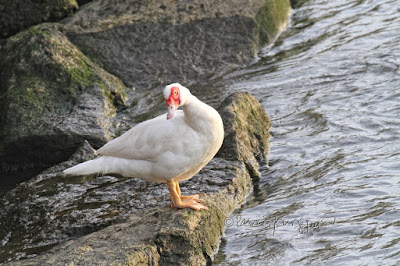 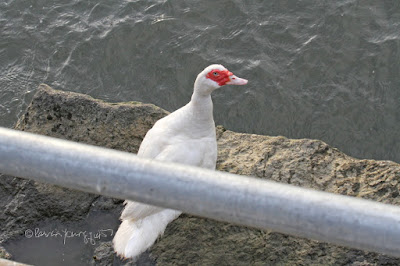 The bird seen in the photographs atop this entry is known as a Muscovy duck (Cairina moschata). I encountered the creature last Wednesday (9-20-2017), when I took a walk along a Hudson River pier located in NYC's UWS.

However, I confess that at the time I had no idea as to this bird's ID. At first I thought the duck may have had some form of leucism. 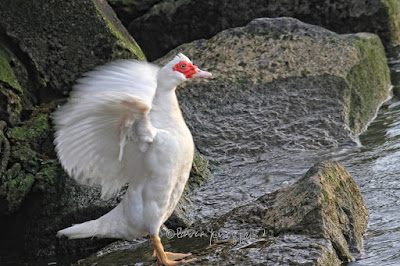 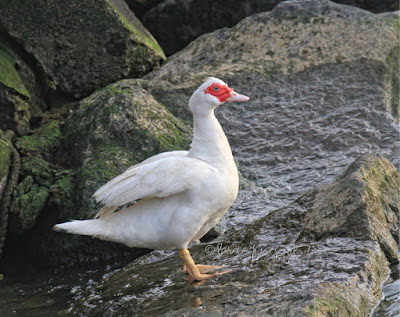 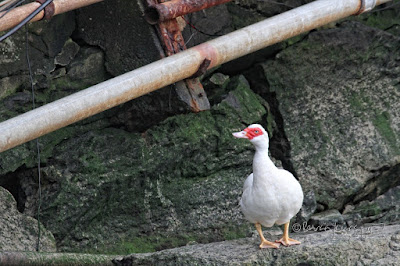 My fascination with this duck caused me to take a number of photographs (seen directly above as well as below) in order to "document" his/her behaviors, so that I could better research the bird's ID once I returned to my home. 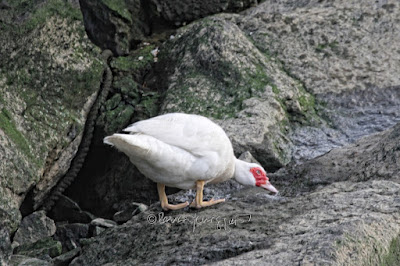 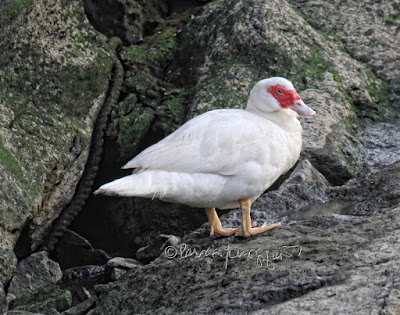 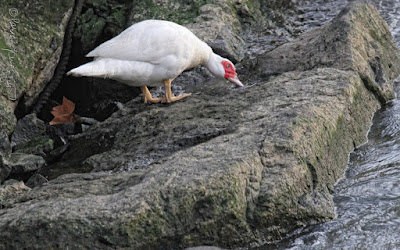 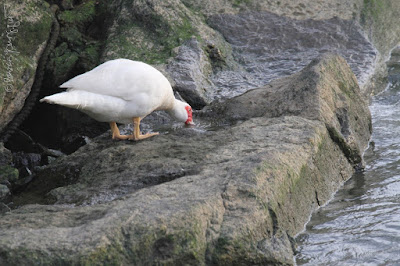 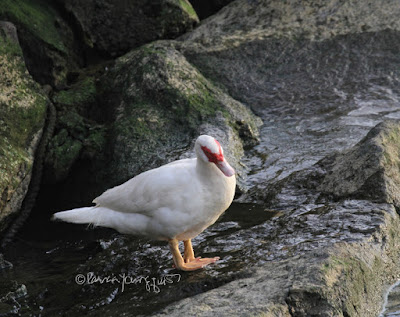 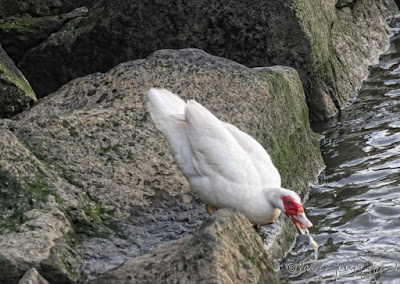 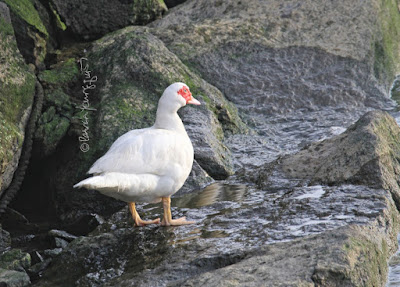 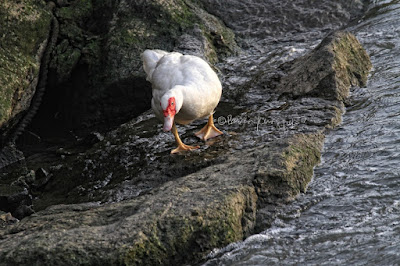 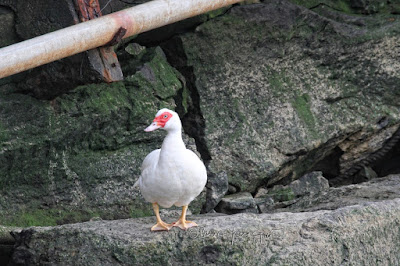 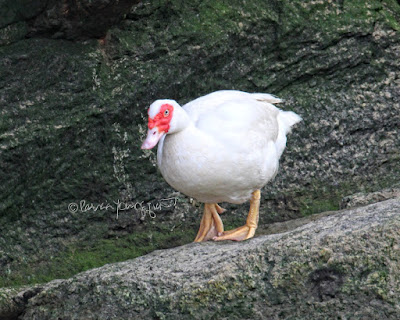 My headshot of the duck (seen below), 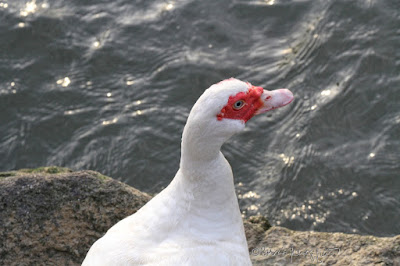 indicates the on the Muscovy's face, but these growths are more noticeable in an image that is on a Wiki Page, which is posted below. 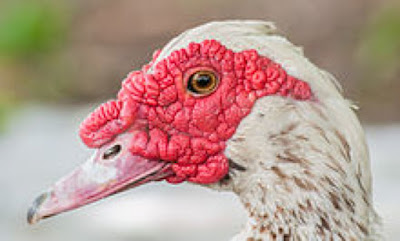 In regard to the Muscovy's physical appearance, a web-page for The Cornell Lab of Ornithology states the following: "Muscovy Ducks have red facial skin with odd warty growths."

The Muscovy's so-called "odd warty growths," remind me of my neurologically-based medical condition, Neurofibromatosis Type One (NF-1), which I've referenced in a number of entries here on Blogger, including a posting that I published this past Friday, September 22nd 2017.

This bird's "odd warty growths, are similar in appearance to the "lumps and bumps" which I have on my face and all over my body as a result of having NF-1. My having these bumps has made me the target of cruel remarks as well as job loss.

I had a church woman say to me that I would be such a "pretty girl IF I didn't have bumps all over my face."

AND a priest once told me that if my bumps really bothered me, I wouldn't wear sleeveless clothing, I told him, that wouldn't help as they are all over my face and could only be disguised if I wore a ski mask.

I was dismissed from a job at The American Museum of Natural History (also known as AMNH), because co-workers feared I was contagious.

Once while waiting for a city bus, a young child pointed to my arms and said to me, "You have a lot of bumps," my reply was, "I do."

However, when a full-grown yuppie stopped me (on a busy street in NYC), to express his "horror" upon seeing my bumps, I must confess that I was left defenseless and speechless.

In any event, perhaps my having NF-1 has made me more aware of nuances in wildlife and other aspects re nature.

Like my getting a bad rap for having NF-1, the Muscovy, at least in the United States seems to be under appreciated.

The aforementioned Wiki Page weighs in on the Muscovy's status in my country proclaiming, "In the US, Muscovy ducks are considered an invasive species. An owner may raise them for food production only (not for hunting). Similarly, if the ducks have no owner, 50CFR Part 21 allows the removal or destruction of the Muscovy ducks, their eggs and nests anywhere in the United States outside of Hidalgo, Starr, and Zapata counties in Texas where they are considered indigenous. The population in southern Florida is considered, with a population in the several thousands, to be established enough to be considered "countable" for bird watchers...

Legal methods to restrict breeding include not feeding these ducks, deterring them with noise or by chasing, and finding nests and vigorously shaking the eggs to render them non-viable. Returning the eggs to the nest will avoid re-laying as the female would if the clutch were removed.

Recent legislation in the USA prohibits trading of Muscovy ducks and plans for eradication are in order to solve nuisance problems..."

Whatever the situation (re invasiveness) may be with the Muscovy duck, I am grateful to have encountered one. I do hope I have a chance to ask The Wild Bird Fund what they think about this bird's fate; but that won't happen today, for I am certain they are busy with this second day of their open house. If you did not have the opportunity to attend it yesterday, I highly recommend you do so today. Click here for details.

Meanwhile stay tuned to this blog for more stories re the Muscovy (and other topics)!