Hello, and welcome to the fifty-second week of my Tuesday's Truths series, which is being dedicated to Mathilde Freund who turns one hundred and one years old today. Mathilde can be seen in the image atop this entry and it is one you may recognize, dear reader, as I featured it in a prior entry here on Blogger.

I took the picture in July of 2016, when I saw her sitting on a bench in front of a store on NYC's UWS, near to the area where she lives.

In the aforementioned entry, I stated that Mathilde and I spoke about Elie Wiesel, the holocaust survivor who had died in his NYC home that past Saturday, July 2nd, 2016. I also mentioned that "Mathilde knew Mr. Wiesel because he was in the same camp (Buchenwald) that her husband had been in. She told me that she was in hiding at the time, but her husband was killed at Buchenwald two months before it was closed. She recalled that her husband was twenty-five years old at the time and that Elie Wiesel was much younger."

In any event, this past Saturday, August twelfth, I saw Mathilde again. She was sitting on the same bench as the one in the image atop this entry. I sat and talked with her for quite some time. I had a camera around my neck, and could have easily taken a new photo of her, but the thought of doing so did not occur to me, as my attention was on listening to her as she told about spending the summer with her son who lives in a rural area of North Carolina.

Mathilde, told me she loves her son-in-law, as well as his children (or her grandchildren), but, keeps her mouth "zipped" when she is in their presence. The rural area is not for her (or yours truly); and her main reason for feeling this way is she can keep her independence in NYC, because she is able to get to anywhere she needs to be without having someone drive her to a given place (and I feel exactly the same re this, but I'm not as good in keeping my mouth zipped like Mathilde).

Be that as it may, Mathilde's 101st birthday is today, and in this post, I'm including some information re what folks said about her day last year when she became a centenarian.

In a July 2016 issue of a local NYC newspaper, Rui Miao, published an article, Trading On Elegance,  paying homage to the then upcoming 100th birthday for Mathilde. Miao writes:

"Mathilde Freund embodies Old-World elegance: silky ginger hair combed behind her ears, where a pair of large hoop earrings dangle and shine. Meticulously polished beige nails match a ruby-encrusted golden dome ring on her right-hand ring finger. (seen in the image below, which was taken by Miao) She wears a black long-sleeve blouse, topped by a black vest embroidered with white lines that pairs well with her white slacks. Her only sartorial concession are the sneakers, for ease of walking, on her feet." 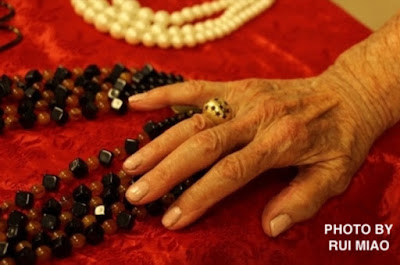 Miao's article goes on to say that Mathilde is "A true New Yorker....  Her classic looks echo her surroundings at the Grand Bazaar NYC Market off Columbus Avenue, where she has been vending antiques and vintage wares since 1976... 'I went all over Europe and Asia,” she said, recalling how she also collected souvenirs along her globe-trotting. “I kept them, they accumulated and now I'm selling them.'" (Images of Mathilde, also taken by Rui Miao,  with her "wares" at the Grand Bazaar NYC Market are directly below). 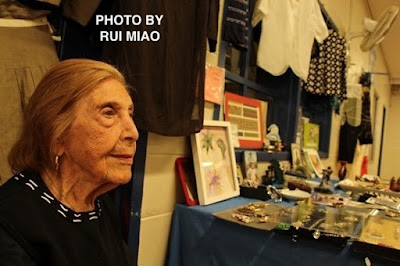 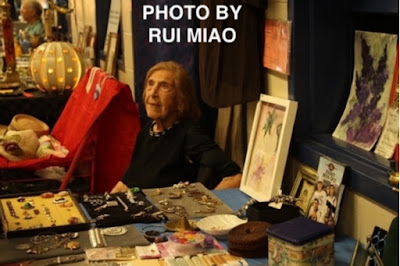 The Grand Bazaar NYC Market, which Miao references in his article re Mathilde, takes place every Sunday. However, Mathilde also sells her "stock" during the week, which is how I happened to meet her a number of years ago.

At that time, my dearly departed friend Helen was vending daily (with the exception of Mondays) on a street corner in my hood. Helen knew Mathilde's back story and would let Mathilde share her table (in terms of them placing what the things they sold).

But, as Miao explains in his article, Mathilde does not sell her treasures for income, her profits goes to the school where the Sunday markets are held as well as public schools in general. Miao writes:

"At her Grand Bazaar table these days, you can find antique jewels and articles, such as an exquisite Italian mosaic brooch or a delicate metal tea tin adorned by a Chinese-style portrait painting."

Mathilde let Miao know that "What's most precious, though, are the people who come through the market."

It takes precious to know precious, and she should know what's precious, as you might surmise from the following photograph, seen in a blog entry from Tom's Eye View Blog: "Roaming the Streets of New York City,"  which was written  in 2016 in honor of her then upcoming 100th birthday. 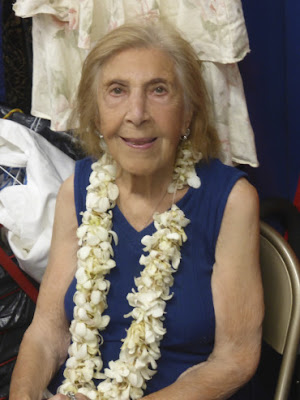 And, with that dear reader, I'll honor this dear Mathilde's birthday with a video of her speaking her life's philosophy. I have posted it before on Blogger, but Mathilde's philosophy bears repeating on her special day.