It's finally the day for the much talked about solar event known as The Great American Total Solar Eclipse! By now, everyone has surely heard about the event; and, probably has well laid plans to see either a partial view, or total view of it, depending upon where one lives.

Here on Blogger, my first mention of The Great American Total Solar Eclipse was this past Friday, in an entry where I discussed my concern for the impact this event will have on wildlife. Within that post I included an image from an article published in The New York Times, which discussed this phenomena, and I included an image from that article that is similar in tone to the one atop this posting, which was also taken from their article.

I chose to include this particular picture for a couple of reasons. An obvious one (at least for those who know that I have a passion for birds), is the illustration. However, another reason that I chose it is for the caption associated with it: During a total solar eclipse, this lifeline is temporarily severed. At the moment of totality, a tide of darkness briefly swallows the land.

For it seems, in many respects, a tide of darkness is already swallowing the land. 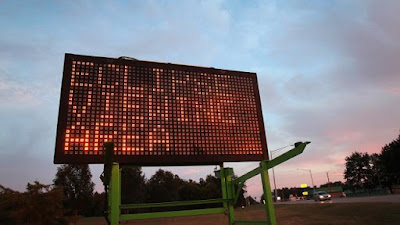 It was included in a tweet from some place/organization called The Hill and it provided a link to an FB post (also by The Hill) which had the same image accompanying by the following narrative:

"State governments across the country are preparing for a massive influx of visitors during a rare social eclipse, with some states expecting to see as many as a million tourists flocking to their area."

The vast number of comments regarding this posting, for me, confirm the darkness that is already swallowing our land. Many of them encouraging people who don't follow their given political and/or religious beliefs to ignore guidelines re protecting ones eyes and hoping they will go blind.

But I was amused by a comment from someone who goes by Daryn T Peabody. He stated "Social eclipse? Whichever unpaid intern that runs your page on Sunday nights should proof read their posts."

His comment was followed by others who joined in his criticism of the supposed error in swapping "solar" with "social."  I did not see the "Sunday night" posting (which was evidently on The Hill), that Peabody is referring to in his comment, but, my thought was the following (which is what I posted in my reply to the only person (another commenter) who appreciated the supposed error:

Thank God, some out there still has a sense of intelligent humor!

I think it's (social eclipse) kind of a Freudian slip error or play on words.

For in NYC it certainly seems to be a social eclipse as evidenced by a hotel in Brooklyn cashing in on the event with:

1 Hotel Brooklyn Bridge's rooftop offers a "$35 party package: one “Frozen Eclipse” cocktail, a lobster roll and eclipse eyewear. You can also score that last with any full-price drink."

Or Bungalow Bar’s "social eclipse event":  "Head to Rockaway Beach for a solar shindig on sprawling deck in Jamaica Bay. There will be a DJ and themed cocktails before and after the main event. Arrive early to cop their complimentary glasses."

And how about, "celebrate with tacos because why not? at Salvation Taco on its Pod 39 Hotel rooftop. Cap them off with the aptly titled, $10 drink specials 'Tequila Eclipse of the Heart' and 'Over-the-Moon.'"

Then there's Loveage! There "rooftop promises unobstructed eclipse views, along with a few other classic NYC sights like Empire State, World One, lady Liberty, and the Hudson — a tourist’s dream! A $12 entry fee gets you a pair of solar glasses and a 'Solar Eclipse of My Heart' cocktail."

Even the Time New York Hotel isn't missing a beat, here's  their "social eclipse" event: "Talk about splendor under the glass: For $25, you can see the eclipse from Time New York Hotel’s 17th floor Glass Pavilion — along with eyewear, two eclipse-themed cocktails and all the Eclipse gum you can chew."

I didn't happen to see the error being pointing out in this posting but perhaps it was not an error at all, just a play on words, or a pun...

It's important to keep a sense of humor re these matters. I think the term social eclipse is brilliant!

AND, I wish I had thought of it!

In any event, the negative comments did not stop with political references and supposed typos.

One woman who calls herself Maddie Bishop had this to say re what can happen if one does not use proper eclipse glasses to view the event:

"I stared at an eclipse when I was a kid....being the know it all that I thought I was...I closed one eye thinking I would be fine...but now everything in one eye has a pink hue to it and is fuzzy....Don't look at the eclipse. It's extremely embarrassing when you go to the eye doctor or to get your license renewed and you have to explain why your vision is fu*ked and...and then look at you like "You are a total fu*king idiot....who in the hell looks at an eclipse"....and then you are forced to admit that, yes, you are actually that idiot."

Bishop was slammed for her heartfelt remark by two folks. One named Pablo O'Neil who responded with "just laughed so hard at your comment that I pooped in my panties."

My having recently read a USA Today article stating "As Lou Tomososki and a friend walked home from Marshall High School in Oregon one afternoon in 1962, they gazed up at the sky. For weeks, everyone had been talking about the partial solar eclipse and the teens wanted to witness it. For a few seconds, they looked at the sun as a sliver of the moon slid over its surface.

While watching, he saw flashes of light, much like he would after having a picture taken with a camera with a flashbulb. He had no idea those flickers would lead to permanent damage.

'We both got burned at the same time,” Tomososki told TODAY. “He got the left eye and I got the right eye';" caused me to respond to Maddie with this remark:

I'm so sorry this happened you and even sorrier for the blindness of some of those who reacted to it and I left a link to the aforementioned article.

Be that as it may, upon seeing the negative rhetoric within in the comments to The Hill's posting, any regrets that I had re not planning to see The Great American Total Solar Eclipse, are now gone. For I don't want to be surrounded by conversations any political party trying to equate this special event with agenda. Besides, I live in NYC, where only a partial view of The Great American Total Solar Eclipse will be visible.

However, I confess that yesterday, I came to close to going to Adorama, a camera store in the Chelsea area, one of the few stores who still had safe-eclipse-viewing glasses in stock.

Normally a trip to that area of NYC is a breeze for me. But as of now, I continue to have such foot pain, even though I am wearing a boot cast! The thought of standing in Adorama's line (as seen in the image below, which is included in an article by The Daily Mail), 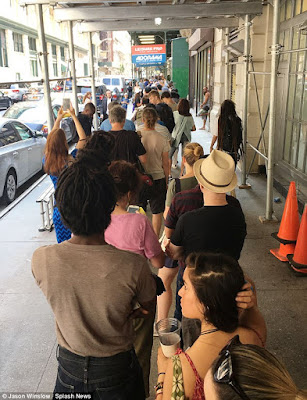 reminded me too much of why I don't go to Trader Joes on a regular basis, 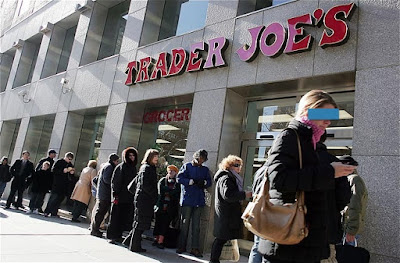 Now, after being reminded of the negative conversations (via the comments on The Hill's post) that are likely to be in earshot should I venture out to get a partial view of  The Great American Total Solar Eclipse, and, after learning of the lines to get into Adorama to buy safety glasses, I have another reason to be content with my being unable to venture out!

Today The Gothamist reported in their article, Watch Out For These Garbage Eclipse Glasses that "A New Jersey amusement park has issued a recall of special eclipse glasses it had sold to customers hoping to look up at today's solar eclipse and not sear their retinas with UV rays. In a Facebook post published Sunday nightm Jenkinson’s Boardwalk in Point Pleasant Beach alerted customers that their glasses supplier, EverythingBranded.com, no longer recommends their eyepieces for viewing today's cosmic action. 'We would like to apologize for this inconvenience, as we were assured by the supplier that the Solar Eclipse Glasses we purchased were in fact ISO Certified and safe to distribute,' Jenkinson’s said yesterday. The amusement park will be issuing a full refund for customers who return faulty glasses."

It seems for me, circumstances pointed to staying home, and I suppose I could avail of The Times advice re this situation. In a recent article they state, "You’re all set to watch the eclipse on the 21st: You have all the gear you need, maybe you even took the day off to travel. But then the clouds roll in, or you’re stuck indoors at work without windows. All isn’t lost. There are plenty of places you can stream the eclipse online if you’re in no position to see it with your own eyes — and you might even get a better view."

However, I guess I won't be doing that! For, I've just paused from typing this posting to turn on the radio. The local NYC announcer for 1010 WINS (where I was once interviewed by one of their reporters, John Montone),  said, "We're past the point of the greatest coverage of the eclipse, but drive with your headlines on."

P.S. Dear reader, I just heard another piece of news on the radio. It was from reporter, Juliet Papa, of 1010 WINS, who was reporting from The American Museum of Natural History, where yet another event for The Great American Total Solar Eclipse was being held, admitted it was exciting, but if truth be told, that at the exact moment of the passing, there was cloud coverage, and you really could not see anything. Thank you Juliet Papa for saving me from a case of woulda, shoulda, couldas!

And thank you, Charles Schultz, for your giving us Lucy and Linus's perspective on an eclipse: 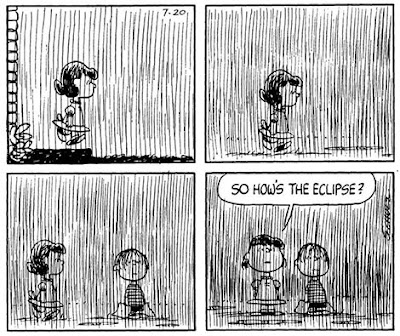