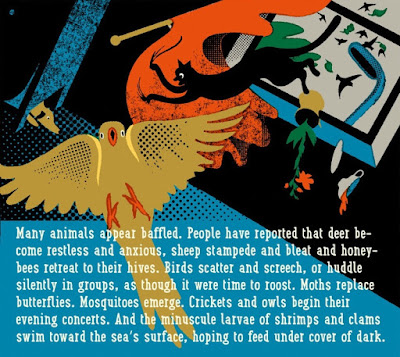 There has been a lot of media coverage regarding the forth coming total eclipse due to occur on August 21st 2017. A web page for Space.com states "On Aug. 21, 2017, America will fall under the path of a total solar eclipse. The so-called Great American Total Solar Eclipse will darken skies all the way from Oregon to South Carolina, along a stretch of land about 70 miles (113 kilometers) wide. People who descend upon this "path of totality" for the big event are in for an unforgettable experience."

The aforementioned resource reminds its readers that "During totality, when the sun's disk is completely covered by the moon, it is safe to view the eclipse with the naked eye. But skywatchers should NEVER look at a partial solar eclipse without proper eye protection. Looking directly at the sun, even when it is partially covered by the moon, can cause serious eye damage or blindness."

A great deal of information can be found within this resource and if you'd like to reference it, please click here. Meanwhile, for those of you who live in the NYC area, like yours truly, another source which provides interesting facts about our viewing The Great American Total Solar Eclipse can be referred to by clicking here.

I've heard that places selling special eye-glasses for viewing this eclipse are sold out and much of the news coverage has been focused on this fact as well as on ways that one can make a pin-hole device to view it safely.

I'm not that handy at DYI-construction, so I won't be doing that. My concern has been focused on the impact that The Great American Total Solar Eclipse will have on wildlife. There are a number of good resources for learning about this.

One is put out by Audubon.org which states,"The biggest change people might notice during the eclipse is audible, not visible. Birds will likely act like the sun is setting for the night, says Scott McWilliams, a wildlife ecology professor at the University of Rhode Island—and may quiet their voices to match."

They go on to say, "Most songbirds will treat it as nightfall, as long as they’re in the 100 percent in the eclipse pathway,” McWilliams says. 'Diurnal songbirds will become quiet; noctural birds the opposite. Thus, for the most part, silence will follow the darkness.' After the sun peeks out again, the chorus will resume as if it’s a brand-new morning. But because it's August, not spring, don't expect many species to burst into dawn songs. Keep an ear out for Red-Eyed Vireos, Northern Cardinals, and other birds prone to late summer crooning, along with non-avians like common true katydids, frogs, and toads."

Of all the creatures listed in Audubon's web-article, Northern cardinals are the ones whose behavior I will try and notice; for both male and female cardinals usually visit my rooftop garden a few times a day. The following set of photos feature a male cardinal enjoying my whole wreath-style peanut bird feeder. 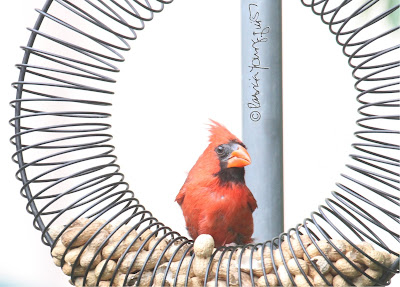 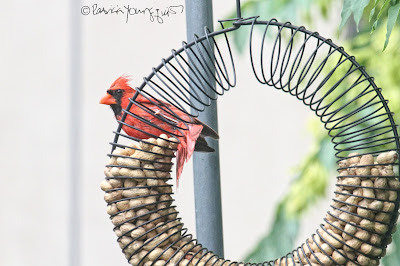 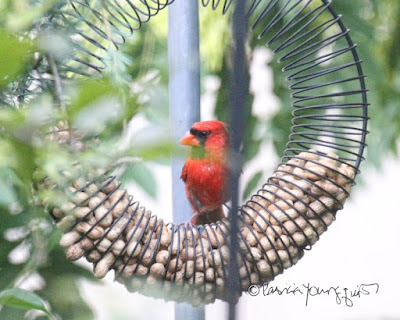 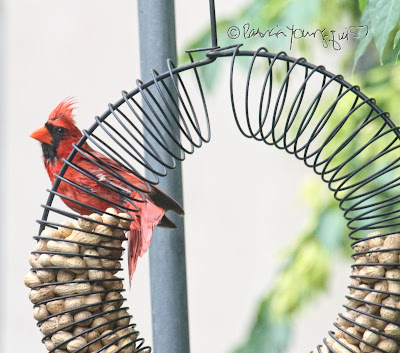 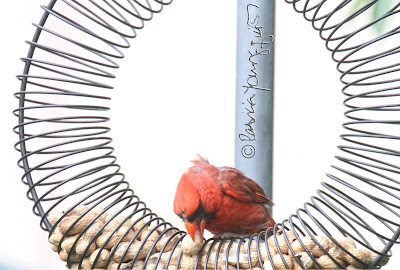 And the next set of images feature a female cardinal spending her time in one of my trees, which is an Acer palmatum ('Shisitatsu' Sawa). 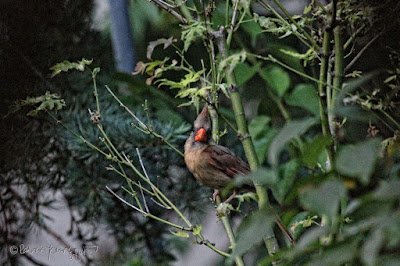 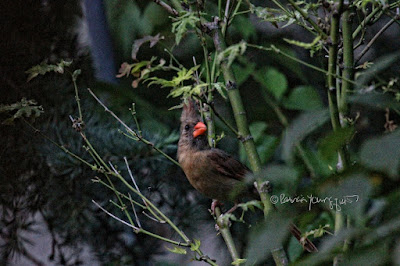 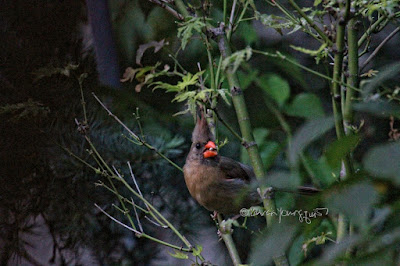 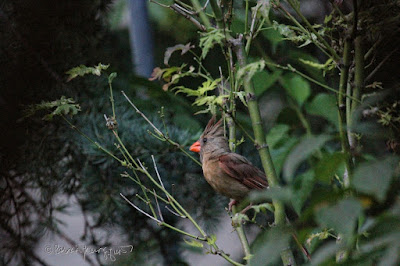 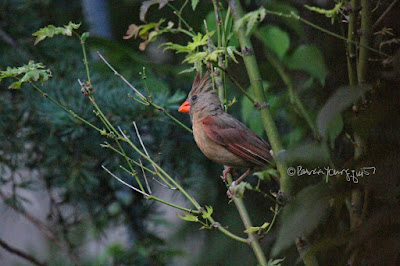 In any event, another good source of information re wildlife and the forthcoming eclipse comes from an issue of USA Today. They state that "While humans will gaze at the spectacle in awe, some animals will be downright befuddled for a couple hours as the day slowly darkens — even in places that only get a partial eclipse. Early reports of wacky animal behavior during eclipses involve birds. Perhaps the earliest is from a total eclipse in 1544 when “birds ceased singing," while another report from a 1560 eclipse claimed 'birds fell to the ground,' according to Science News."

Moreover, The New York Times, also has an interesting article (where I got the image atop this entry) on the impact eclipses have on wildlife.

There you have it dear reader, a number of things to consider in your preparation for the forth coming  (8-21-2017) eclipse, which has been dubbed The Great American Total Solar Eclipse.
Posted by The Last Leaf Gardener