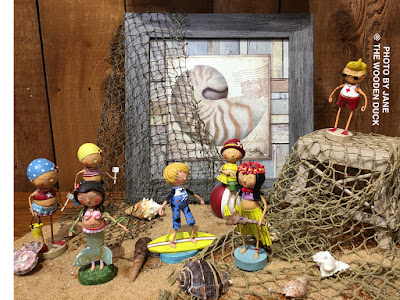 This photograph (atop my entry) of beach bums was taken by Jane from The Wooden Duck. It is an image that you might recognize from a recent post (8-9-2017) here on Blogger.

Within the aforementioned post, I explained that Jane and her husband, Art, made it possible for the beach to be brought to me; via these figurines, since I have not been able to go to the beach this summer.

Jane and Art's cast of characters have finally settled in my "homemade beach," where they joined my three bathing beauties (from the late Donna De Solis), as seen in the next image, where they (Donna's gifts to me), are indicated with numbers.

If you compare, my beach scene with Jane's, you should notice five differences (besides "Donna'a" figurines). See if you can spot them, dear reader. After studying the two images, please continue reading this entry for the answers.

One of the five differences is this: Jane's beach-secne image features a mermaid; mine does not. However, I know the mermaid well, because she has visited me for Halloween in the past, as evidenced below, where she posed for a solo photo-op; 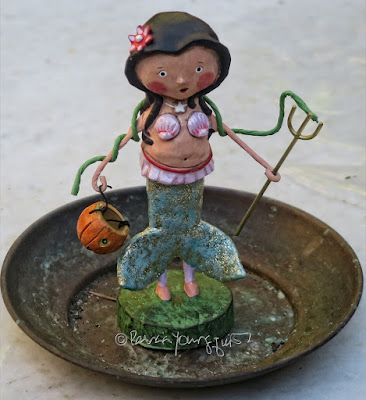 and, where she was included in a photograph of a group of trick-or treaters who visited my indoor succulent garden a couple of years ago. 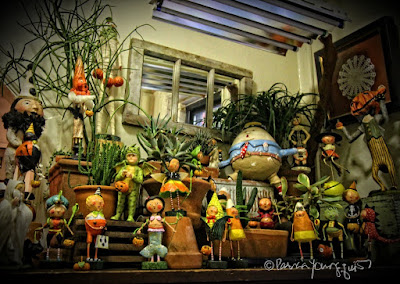 The second of the five differences has to with Bernie. He is not in Jane's image, but can be seen to the far right in my group photo of the visiting beach bums, and, a solo photo-op of him, where he posed for this picture in my urban garden, is directly below. 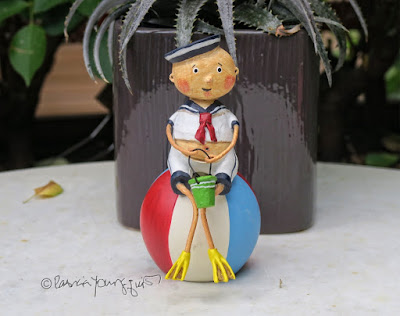 Bernie did not travel well. He injured his foot three times! However, he seems to be doing great now and enjoying hanging out in my make-shift beach! Bernie is the younger brother of twins who can be seen in the next set of pictures. 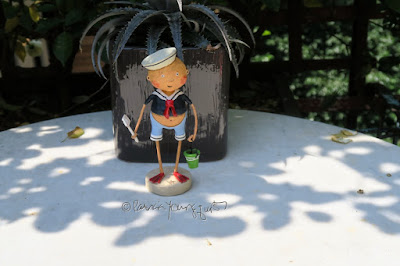 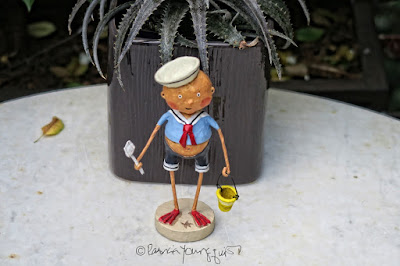 Like their older brother they were willing to pose for solo photo-ops in my garden. They are also included in my group photograph of visitors at my home-made beach. But they are not in Jane's, so consider them the third and fourth differences (of the five I asked you to find) between Jane's image and mine.

The fifth difference is the presence of someone who calls herself a Beach Babe. She can be seen in the following picture, also taken in my garden before she went to my homemade beach. 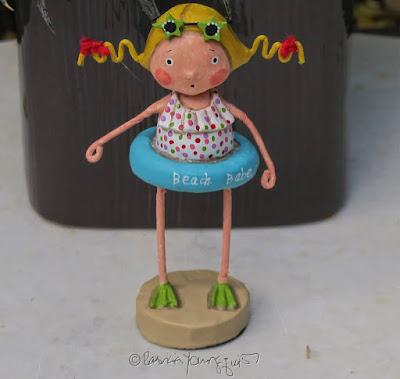 I'm grateful for the presence of all my beach loving visitors, and I'm also thankful to the dearly departed Donna De Solis, as well as to Art and Jane, for making it possible for me to have the presence of a beach in my home since I have not been able to go one (as of this posting), for the 2017 beach season.