Pigeons, and sparrows, and, starlings! OH MY! 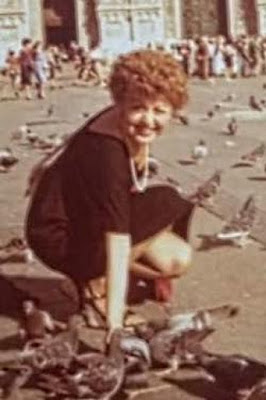 The other week, on Wednesday, August 16th 2017, I went to a wake which was held at the Papavero Funeral Home in Queens. The solemn event was in honor of the beloved Angela Mussa, who is the woman in the undated photograph atop this entry. I never met this lovely woman, who died at age ninety-three in her daughter's (Dr. Carla Mussa DDS) arms, however, I had met her daughter on a few occasions at parties that were held by our mutual friend, TT.

When TT told me Carla's mother had died, and that she was planning on attending the wake, I offered to accompany her to support Carla. I knew Carla was an only child, and that any extended family lived in Italy, therefore, I thought attendance might be sparse.

In any event, at the wake a slide show featuring photographs from various stages of Angela Mussa's life was playing, and the picture featured here is one of the images which was included.

Grainy as the image is, if you knew Angela Mussa was born and raised in Italy, you might be able to tell that it was taken in Italy, and that she is feeding pigeons.

In any event, I don't know much about Angela Mussa, but I do know a thing or two about pigeons, which you can read about in my entries here on Blogger by clicking here.

As you may know, dear reader, pigeons are associated with many places of interest in Italy. In fact Venice for Visitors claims the following:

"Pigeons, once rivaled cats as the traditional, if unofficial, mascots of Venice. 'In A Venetian Bestiary, Jan Morris wrote: The pigeon is, if not actually sacred, at least highly respected in Venice. You will never be offered him roasted in a Venetian restaurant. On the contrary, sometimes invalid pigeons, having lost a leg perhaps in a more than usually unseemly scramble for peanuts, become known individually to the waiters at the Piazza café and are thereafter privileged for life, allowed to preen themselves on unoccupied tables, and fed wonderfully sustaining morsels of toasted sandwich. Pigeons can get away with almost anything in Venice, and sometimes you will see one, all puffed up with pride, swaggering into the narthex of the Basilica San Marco itself.'"

The aforementioned web -page also has this to say re Italy's relationship with pigeons:

"In Venice: A Literary Companion, Ian Littlewood explained the origins of the Piazza San Marco's pigeon colony: Pigeons - Piazza San Marco - Venice"According to tradition, it was from the gallery [of the Basilica] where we are standing that the original pigeons were released on Palm Sunday, weighted by pieces of paper tied to their legs. Most of them ended up on the dinner table as part of the Doge's Easter largesse to the populace, but the rugged survivors were felt to have earned St. Mark's protection. So year by year a few more pigeons found refuge among the domes on the basilica. They have since grown more numerous, and the enthusiasm of most tourists for the birds is short-lived, but as the average visitor now spends less than twenty-four hours in the city they still have plenty of friends."

And Venice for Visitors goes on to explain that "Today, pigeons have formed colonies throughout the city, and the estimated 100,000 birds far outnumber Venice's 60,000 human residents. It can be disconcerting to walk down a street and encounter several dozen pigeons flying toward you at head height. They usually miss pedestrians, but not always. Juli Van Zyverden, an American librarian who used to live in Venice, once told me how she'd seen a pigeon collide with an elderly man who wasn't quick enough to duck. The man was bleeding, so she escorted him to a pharmacy for a clean-up and bandage."

Venice for Visitors concludes their info re pigeons and Venice concludes by "offering A few words on feeding the birds: Many Venetians are in the habit of leaving out grain or bread for the pigeons of the neighborhood. This is illegal under a decree that the Comune di Venezia issued late in 1997. The ordinance states: The direct administration of food to feral pigeons 'Columba livia forma domestica' is prohibited throughout the City Council area. ... Contravention of the regulations contained in this ordinance involves an administrative sanction of 1,000,000 lire. Also, sellers of pigeon food were legally banned from the Piazza San Marco in January, 2008."

As for The United States and pigeons, I've read (in article by Carl Wollney in The Staten Island Advance) that "Much to the consternation of many birders and conservationists, pigeons and starlings, along with house sparrows, constitute the three most common species of birds in many urban environments in the United States."

In this article, Wollney explains a reason for this claiming "many plants and animals introduced to new environments do not thrive, becuse the conditions in their new home aren't suitable for their needs. But introduced species can be very successful if they have the right combinations of characteristics, and starlings, house sparrows and pigeons...

"... When they arrived over a century ago, these three species competed with native species for food and shelter, pushing them out. Eastern bluebirds were once a common species here but are now a rarity, due to house sparrows and starlings. And their success continues to affect the ecosystems they have invaded.

"Unlike some invasive species, the birds were released here deliberately, for what appeared to be 'a good idea' at the time. It may have been for sentimental, recreational or romantic reasons, but the unexpected result has hurt natural communities in this country and made them less diverse...

"... Pigeons, also called rock doves, were the first of these three species to be introduced to North America. This isn't surprising, since humans have been raising captive pigeons for around 5,000 years. Over the centuries, selective breeding has produced more than 250 varieties for fashion, racing or meat.

"... The first domesticated pigeons arrived in America during the 17th century, possibly as early as 1606. Many more have been imported since then. Over the years, some pigeons were released or escaped, giving rise to the large populations of feral pigeons found in New York... But of the three, pigeons are probably the least problematic... They also begin nesting and raising their young in late winter or early spring, before the local migrators have returned, giving them a jump on getting ahead of the local competition."

In the next two pictures, which you may recognize from previous entries here on Blogger, a feral pigeon with her young one is "getting ahead of the local competition" within the confines of my rooftop garden. 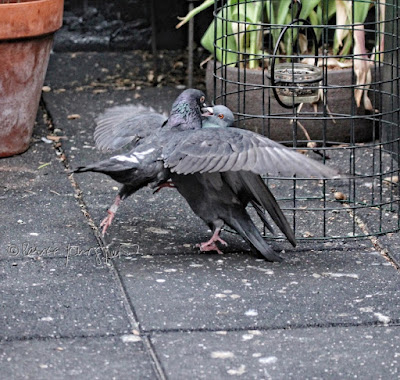 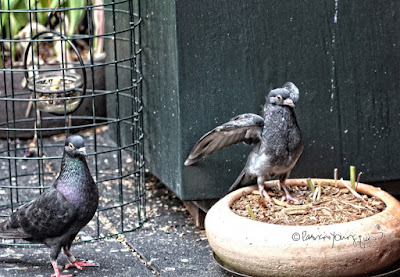 And the next two pictures a feral pigeon is staking claim on what should be a birdbath for everyone. 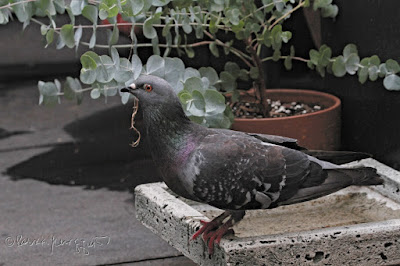 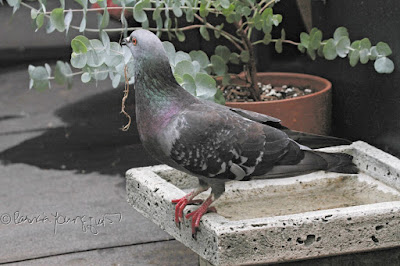 Pigeons of all ages and types also enjoy spending time within the "arms" of the Ailanthus Trees, as evidenced below. 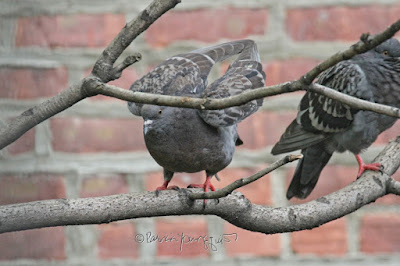 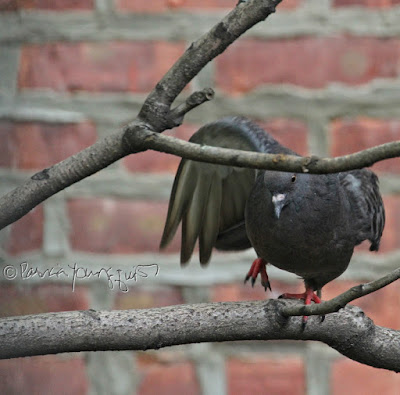 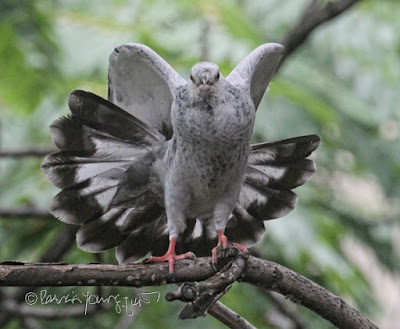 Carl Wollney goes on to say that after pigeons, "House sparrows were the next to arrive. Immigrants from Europe missed this familiar sparrow from their homelands and believed introducing them to America would help control insect pests. Eight pairs were released in the spring of 1851, but they did not fare well.  Another 100 birds were imported from England in 1852. Fifty were released near the Narrows in Brooklyn, and the rest were let go the following spring in Green-Wood Cemetery in Brooklyn.  Further releases helped bolster the population and spread the house sparrow across America."

Regarding sparrows, I always feel honored when they visit my place, and, apparently that's how the writer Henry David Thoreau felt when sparrows visited his property. He is known to have said “I once had a sparrow alight upon my shoulder for a moment, while I was hoeing in a village garden, and I felt that I was more distinguished by that circumstance than I should have been by any epaulet I could have worn.”

I have quite an appreciation for this sentiment, and, for the bird type who were the inspiration for Thoreau's quotation, which is evidenced in my entries which discuss sparrows. If you'd like, they can be referenced by clicking here.

Meanwhile, the following set of photos feature house sparrows enjoying a house-style feeder that I have in my garden. 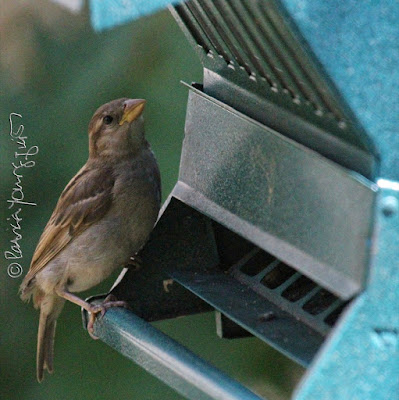 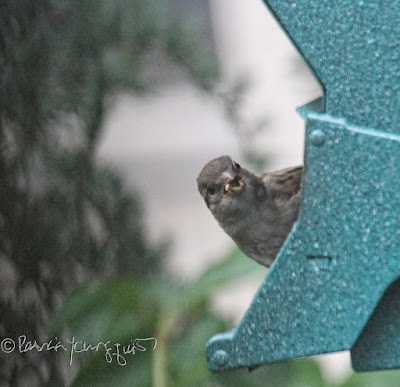 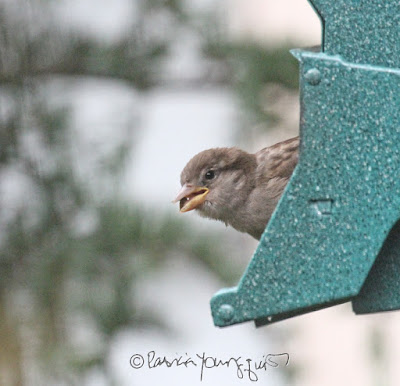 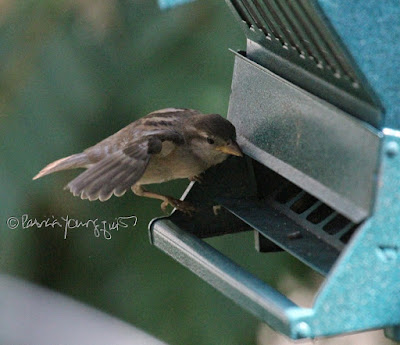 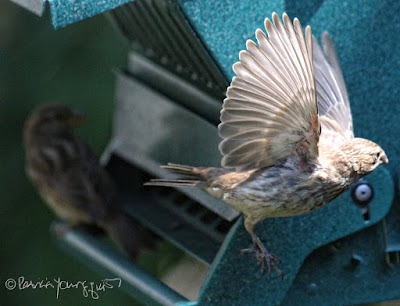 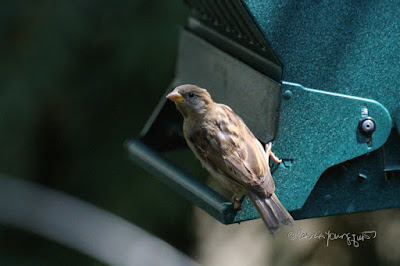 And last but not least, Wollney states that after pigeons, and house sparrows, "Starlings were the last to arrive. During the mid-19th century, a number of 'acclimatization societies' were formed with the specific purpose of releasing European plants and animals into America for cultural and commercial reasons."

He points out that "In 1877, Eugene Schieffelin, a New York pharmacist and Shakespeare enthusiast, was the chairman of the American Acclimatization Society.  The society supposedly planned to introduce all of the birds mentioned in Shakespeare's plays into American parks.  Starlings are mentioned briefly in one play, and a number were released in Central Park."

A few years ago, I wrote about this fact re Schieffelin, and my entry re him can be referenced by clicking here, for my posting re starlings, please click here.

Wollney states that "Today there are an estimated 200 million starlings across North America. (And) that  Starlings and house sparrows aggressively drive other birds, especially the eastern bluebird, from nesting sites and food sources, and have the greatest negative effect on native bird populations."

I don't know if Wollney is correct in his claim that "Starlings and house sparrows aggressively drive other birds, especially the eastern bluebird, from nesting sites and food sources, and have the greatest negative effect on native bird populations;" but I was once slammed for writing about starlings from someone who may have subscribed to this belief.

In any event, I'll leave you for the day with photos of starlings spending time in my garden during various stages in their lives. 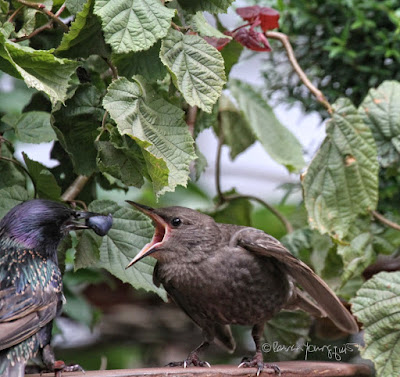 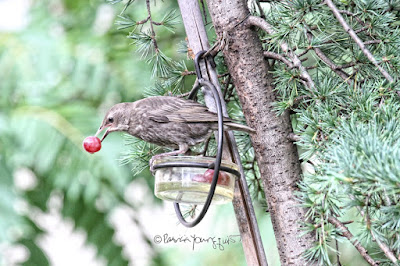 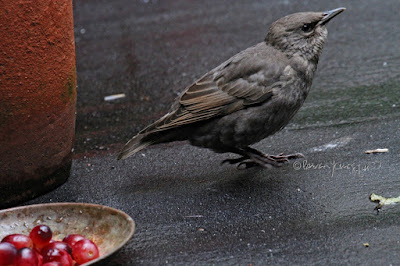 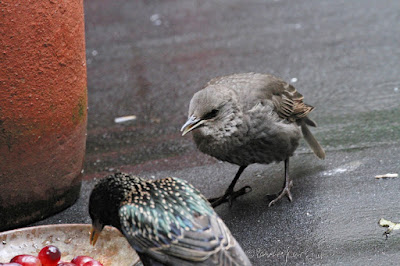 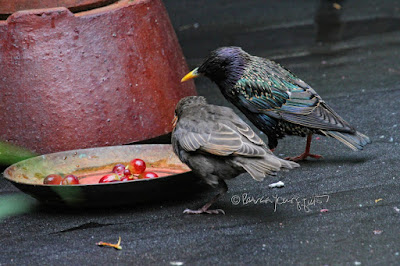 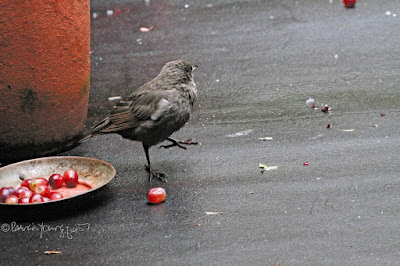 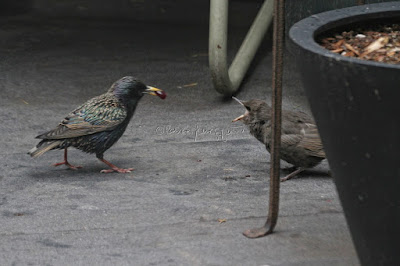 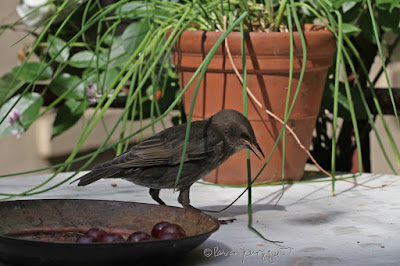 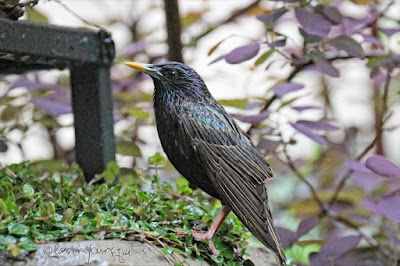 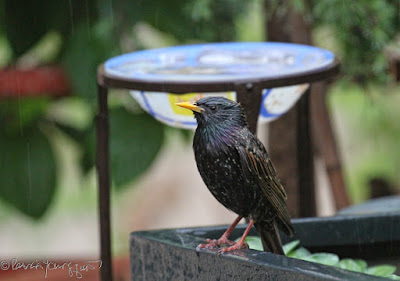