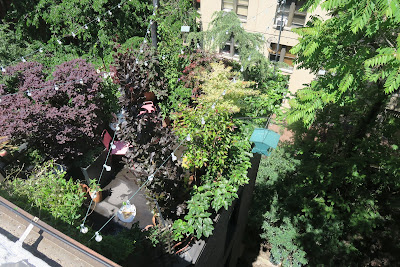 The photograph atop this entry (featuring an aerial view of my rooftop garden) was taken by Juan V on June 1st 2017. 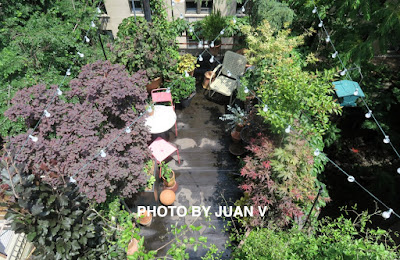 By comparing the images, dear reader, can you spot the changes in my garden?

Here are the answers: 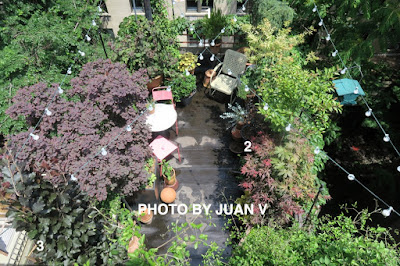 The number one is indicating a Rosemary "Tree" that was planted on that day. It is in the spot where my 'Tamukeyama' (AKA Japanese Maple) used to be. This particular tree's container had cracked, therefore, re-potting was warranted. Moreover, the 'Tamukeyama' needed a larger pot, which it now has. The 'Tamukeyama' has been moved to where my Fagus sylvatica (AKA Beech Tree) used to be as indicated by the number two.

My Fagus sylvatica (Beech Tree) has been moved to the location where my Canadian Palm once stood, which is indicated by the number three. It was time to discard that exotic man made tree!

Today, July the sixth, a few more changes were made in my garden. Can you spot them in the following picture which was also taken by Juan V? 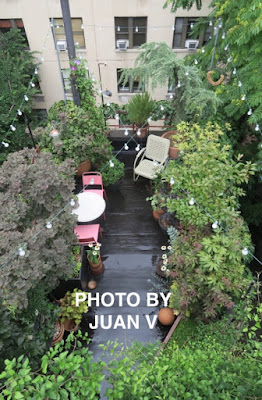 Here are the answers: 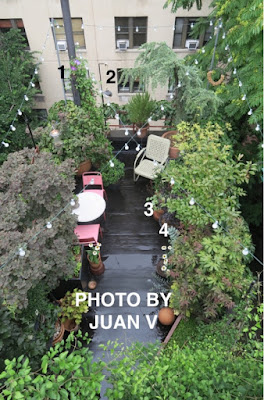 My H.F. Young Clematis has a couple of new flowers (and this is indicated by the number one). I have a new bird house which can be seen directly below the number two. Number three is indicating another variety of Heuchera which was planted today, while number four is referencing a new green plant whose name is Melianthus Honey Flower.

And there you have it, Thursdays Test of your powers of observation! How did you do, dear reader?