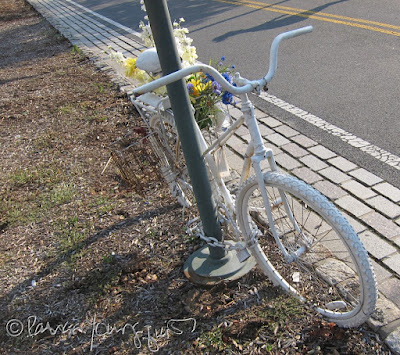 The month of May is full of a number of observations, including raising awareness regarding the medical condition known as Neurofibromatosis (NF) which I discussed in yesterday's blog post, as the day of May 17th is World NF Awareness Day.

May is also known as National Bike Month, which I mentioned in an entry that I published in the beginning of the month, prior to my first opportunity to tandem cycle since my accident (not related to cycling) in 2016. And according to The League Of American Cyclists, the third week of May, which we are currently in, is designated as bike to work week. Biking to work is not an option for me because I don't have a bicycle and I work from home. Moreover, I only have vision in one eye, hence my cycling is limited to being a stoker on a tandem bike. I'm thrilled that I get to do this and grateful to have a competent captain (ZW). ZW is the one who pointed out the bike featured in the image atop this entry. She noticed it as we were cycling north on the portion of the greenway which runs along the Hudson River.

This particular bicycle is known as a ghost bike. According to a Wiki page, "a ghost bike (also referred to as a ghostcycle or WhiteCycle) is a bicycle roadside memorial, placed where a cyclist has been killed or severely injured, usually by a motor vehicle. Apart from being a memorial, it is usually intended as a reminder to passing motorists to share the road. Ghost bikes are usually junk bicycles painted white, sometimes with a placard attached, and locked to a suitable object close to the scene of the accident. They are also sometimes stripped of their tires, to deter theft."

The aforementioned web-page also states "According to The Guardian, the first recorded ghost bike was in St. Louis, Missouri, in 2003. A witness to a collision between a cyclist and a car placed a painted bike at the location with a message that read: 'Cyclist struck here.' The original idea of painting bikes white reportedly goes back to the city of Amsterdam in the 1960s as an anarchist project to liberate two-wheel transport—white bikes were free, help yourself and then leave it for someone else."

Another source re Ghost Bikes, known as Mashable, reports that "New York, and more than 200 other cities around the world, are dotted with these unassuming yet emotionally jarring bicycles. Spray-painted entirely white from the handlebars to the hubs, the bicycles have a tendency to blend into the cityscape."

Mashable subsequently explains "the group that creates the ghost bikes is one run entirely by volunteers. Occasionally, family and friends of the victims lend a hand to create and position the bikes, in memory of their loved ones. Each bike is built with a simple goal: to remind everyone to slow down, be safe and treat others with respect. The memorials are set up inconspicuously. Volunteers take a completed ghost bike (a bicycle stripped to its most basic parts and painted matte white) to the site of the fatal crash. The bike is locked to a street sign, and the volunteers quietly walk away."

Additionally, the aforementioned source points out, that in 2014, "while celebrating a decade of raising bicycle safety awareness, the 20 fatal crashes that occurred in New York in 2014 is in par with the 24 deaths from 2005, when the first ghost bikes began appearing throughout the city. Since then, 150 of the memorials have been installed in and around New York, making it arguably the largest of all cities that participate in the project."

The following pictures feature two more views of the bicycle in the photograph atop this entry. 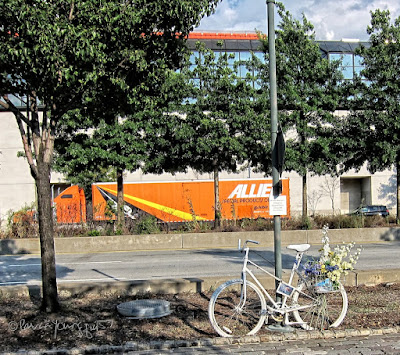 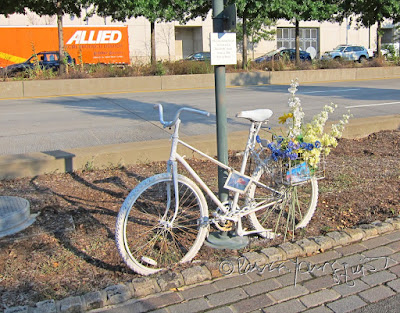 I hope that during this Bike to Work Week and National Bike Month, awareness of observing safety issues for cyclists and those they encounter is a prime focus.
Posted by The Last Leaf Gardener