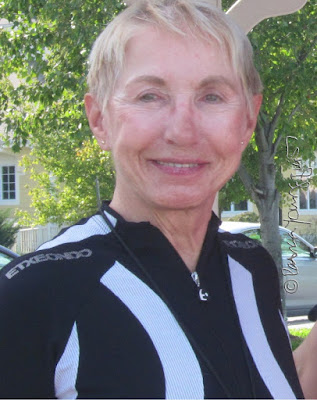 The photograph atop this entry features Trudy Hutter, an avid (understatement) cyclist, who is also a coordinator for The Weekday Cyclists in NYC. They meet on Tuesdays to ride in Central Park and on Thursdays, they ride to different locations in NYC and its surrounding areas.

I am not a member of this group, because, due to my visual challenges I am not able to ride a bicycle; unless it is as a stoker on a tandem. Therefore, I'm grateful to say that I have been able to participate in tandem cycling, ever since the opportunity was presented (2009) to persons with vision loss. At that time ZW was assigned to be my captain, and we've been cycling ever since.

It is through ZW that I met Trudy, and she she has joined us on her single bike on occasion, including when we've ridden to Piermont, a popular cycling destination for New Yorkers. The town is north of the hamlet of Palisades, east of Sparkill, and south of Grand View-on-Hudson, on the west bank of the Hudson River.

The image of Trudy was taken (2011) at an unofficial rest-stop when we were cycling through side streets (as opposed to our being on Route 9) to return to Manhattan after having spent an afternoon in the town of Piermont. Our stop was unofficial because Trudy needed to look at a map. She is very good at scoping on the safest routes for cycling, and our return trip of using side streets was a trial run for Trudy to see if it would be a good way for a group to cycle to Piermont.

The next picture shows Trudy (left) on the occasion when she joined ZW (right) and I to cycle around the perimeter of Manhattan.

We had stopped to enjoy a picnic near The Little Red Lighthouse, (seen in the second picture below), a place that has been a frequent destination when ZW and I have ridden there on her tandem. ZW's tandem can also be seen in the image but Trudy's single bike is obscured. 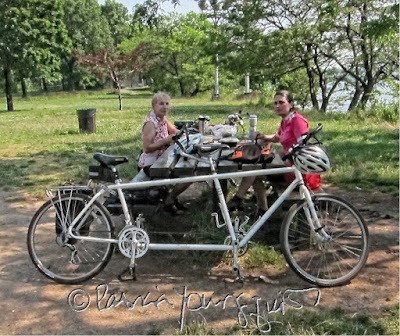 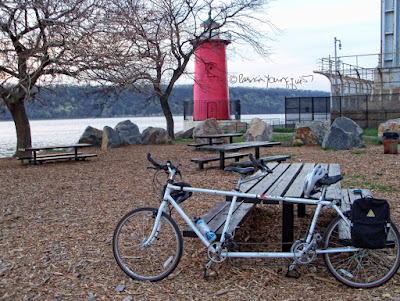 Trudy is on my mind today because last evening, when I participated in tandem cycling (my third ride of the season) with ZW, we discussed that we'd like to have her join us in cycling on the summer solstice. The summer solstice is a great time to cycle because it is the day of the year when sunlight is at its longest duration.

In any event, last evening, when ZW and I cycled north (from Greenwich Village) up the westside greenway, along the Hudson, our intent was to do a Manhattan half loop ride. This meant that we would be cycling beyond The Little Red Lighthouse, then up a steep hill, making our way to Dyckman Street, before crossing east to make our way to the greenway which runs parallel to The East River. The map posted below might give you a sense of the journey I've described.

In bygone years when we've done this route, we've had to walk the tandem down several deep steps as the path for cyclists only extended to a certain point. However, we had always seen the progress of a path being constructed which would avoid the carrying a bicycle up or down stairs.

And, much to our pleasant surprise, last evening, we found it had been completed! What a joy it was to cycle on a newly paved path that would lead to Dyckman, allowing us a less strenuous means of getting to the greenway on NYC's Eastside.

But, we came upon an unexpected pleasure at the end of the new path! We discovered portions of the greenway continuing north in Inwood Park! We abandoned our plan to head east, and instead we explored the new find.

After we did some cycling around the area ZW "parked" the tandem against a bench (she and the tandem can be seen in the photo directly below). 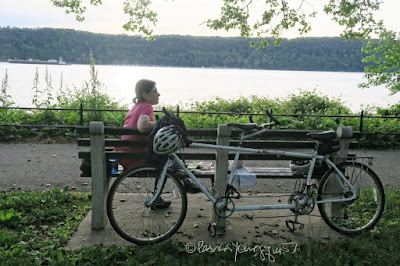 Then we proceeded to use the bench as a picnic table and enjoyed a supper of guacamole, chips, olives, cherries, spicy mayo, and Popeye Pesto with french bread. 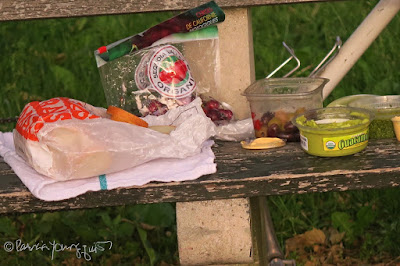 All during the "dinner hour" we were serenaded by American robins in the atmosphere of a peaceful sunset on a relatively quiet time on the river (a tug boat and a barge versus jet-skis). 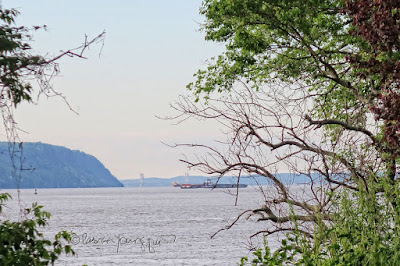 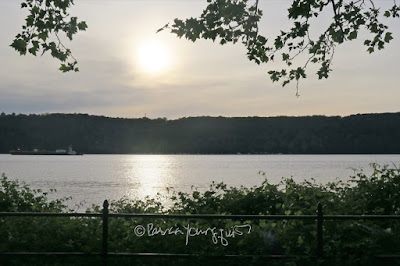 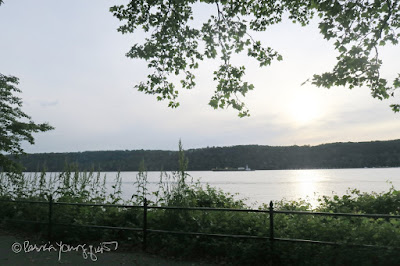 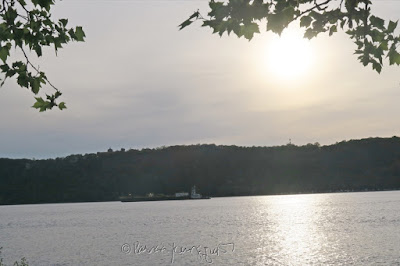 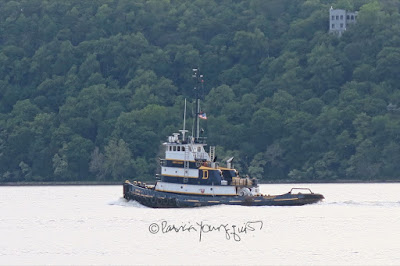 Pictures of the jet-skis and robins are not included in my post as I received the "CHANGE YOUR BATTERY" notification on my camera, prompting me to make a note to get a spare battery in the near future.

As we made our way back to the path which had led us to our picnic sight, we came across another amazing path in Inwood Park! The image below features a view of it. This picture is from the web, for as I indicated, my camera had lost power. 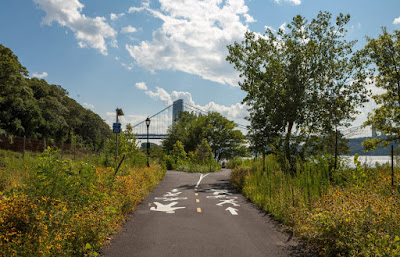 The aforementioned web page explains this path has "wildflowers like cosmos, black-eyed Susans and Queen Anne’s lace emerge on either side of the pavement. Large granite boulders appear every so often, inviting walkers to stop and take in the sweeping views of the Hudson River... (and)
the new, mile-long path opened along the river in Upper Manhattan, just below Dyckman Street. It runs south through Fort Washington Park and opens up for the first time 9.5 acres of riverfront west of the Amtrak rail line. Then, without warning, it just stops."

The web page goes on to say, "The New York City parks department hopes to change that, but acknowledges that it is unlikely to happen anytime soon. Long-term plans call for the path to be extended south along the Hudson to the George Washington Bridge, where it would join up with the Manhattan Waterfront Greenway."

So obviously, last night we had to circle back, but not before encountering a mother and father goose taking a stroll with their adorable goslings. More incentive to get a spare battery for my camera!

Then, during the entire time we cycled back to the village, we did so under a pink sky, which definitely kept us in, as Billy Joel would say, "in a New York state of mind."

After all, we were "On the Hudson River Line..." (Albeit on a tandem!)
Posted by The Last Leaf Gardener