AND, Still More Stuff RE Wednesday's Wisdom! (Facts about "Mary had a little lamb...") 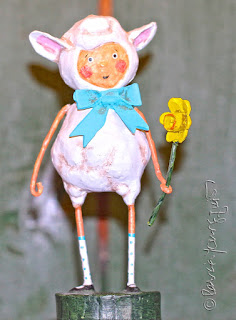 Earlier today in an announcement (here on Blogger) re Wednesday's Wisdom, I explained that today, May the 24th, is the start of Fleet Week in NYC.

In the aforementioned entry, I included images of figurines related to sailors. It has now been brought to my attention by another figurine (the lamb featured in the image atop this entry), that in addition to 2017's Fleet Week beginning on May 24th, another event occurred in years long gone by. In 1830, on May the 24th, the nursery rhyme, Mary Had a Little Lamb, was first published by the Boston publishing firm Marsh, Capen & Lyon, as an original poem by Sarah Josepha Hale; and this poem was inspired by an actual incident!

According to Wiki, "As a young girl, Mary Sawyer (later Mary Tyler) kept a pet lamb that she took to school one day at the suggestion of her brother. A commotion naturally ensued. Mary recalled: 'Visiting school that morning was a young man by the name of John Roulstone, a nephew of the Reverend Lemuel Capen, who was then settled in Sterling. It was the custom then for students to prepare for college with ministers, and for this purpose Roulstone was studying with his uncle. The young man was very much pleased with the incident of the lamb; and the next day he rode across the fields on horseback to the little old schoolhouse and handed me a slip of paper which had written upon it the three original stanzas of the poem...' There are two competing theories on the origin of this poem. One holds that Roulstone wrote the first four lines and that the final twelve lines, less childlike than the first, were composed by Sarah Josepha Hale; the other is that Hale was responsible for the entire poem."

Wiki goes on to say that "Mary Sawyer's house, located in Sterling, Massachusetts, was destroyed by arson on August 12, 2007.A statue representing Mary's Little Lamb stands in the town center. The Redstone School, which was built in 1798, was purchased by Henry Ford and relocated to a churchyard on the property of Longfellow's Wayside Inn in Sudbury, Massachusetts."

The aforementioned page includes illustrations and I've posted an example directly below. 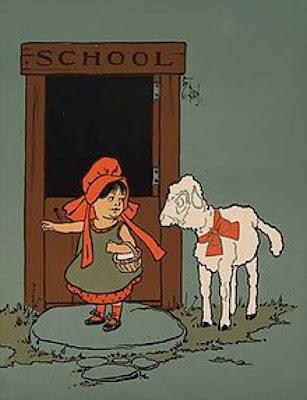 Additionally, Wiki explains that "in the 1830s, Lowell Mason set the nursery rhyme to a melody adding repetition in the verses."

I'm not sure if these facts re Mary Had A Little Lamb will come up in conversation, dear reader, but if it does, you'll be able to chime in with non-fake news!