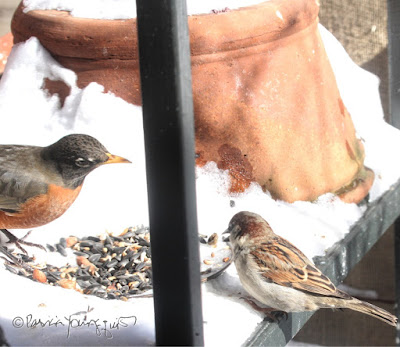 Two days after the "bombogenesis" nor'Easter named STELLA did her stuff in NYC (and other parts of the northeastern portion of the United States), two songbirds, an American Robin and a house sparrow, were having a conversation in my rooftop garden. The robin listened intently as you can surmise from the photo directly above.

Suddenly, for no apparent reason, the sparrow took off, leaving the dumb-founded robin to question the situation by murmuring, 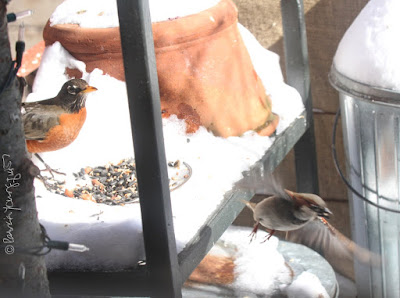 "Was it something I said?," and my overhearing the robin wondering this aloud, caused me to think of a Mutt's comic strip which I've posted directly below.

In any event I was subsequently surprised to learn (by chance) that "Was it something I said?," is the name of a British comedy panel game show.

Be that as it may, my learning of the name of a British comedy series did not give me the answer as to why the robin took off so suddenly.

But I wasn't about to bet on it, which is what one of Mark Twain's characters (in The Celebrated Jumping Frog of Calaveras County) might've done — at least the one in Retold Mark Twain, by Pegi Bevins, as evidenced text image directly below.

In any event when most folks hear references relating to two birds, the idiom, "You can kill two birds with one stone," often comes up. I don't particularly like the wording of this idiom: the idea of killing any bird with any thing is repulsive to me. Still this idiom has been around since the 1600's.

According to a webpage, "the phrase appears in a 1632 book by J. Morgan Gent and a 1655-1656 exchange between Thomas Hobbes and John Bramhall. Though its precise origin is unclear, the earliest English appearances of the phrase date back to the 17th century."

The aforementioned reference goes on to say, "Some experts date the origins of the phrase back even further, to Greek and Roman mythology and the story of Icarus and Daedalus, who constructed wings to escape from the Labyrinth in Crete. Daedalus is said to have obtained the feathers used to make the pair's famous wings by killing two birds with a single stone. Another common theory attributes the phrase to the Roman poet Ovid."

Regardless of the story of Icarus and Daedalus, or maybe because of it, I have a distaste for the idiom, and prefer to associate two birds with the following nursery rhyme.

But all of this analyzing of two birds has not helped me to learn why the sparrow took off so suddenly, leaving the robin to wonder "wth" happened?
Posted by The Last Leaf Gardener