In Honor of Saint Patrick's Day

In honor of Saint Patrick's Day, a couple decided to re new their vows in the presence of their Irish friends. The event took place at a wooden church, which they posed in front of after the ceremony took place, as seen in the photo atop this entry. A close-up of the happy couple can be seen below, 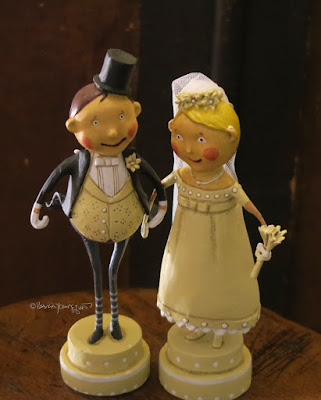 and, if you follow me on Blogger, then you probably see a lot of familiar faces in the first image.

The pig seen at the far right in that picture, and in a solo photo-op below, 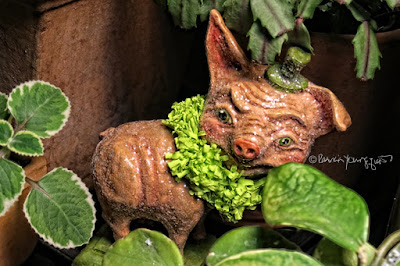 has been featured in a number of entries here on Blogger, which you may reference by clicking here,  as well as by clicking here. Behind the little pig, is a lad with a pointed hat, he can be seen in the next picture, which is a solo shot of him, 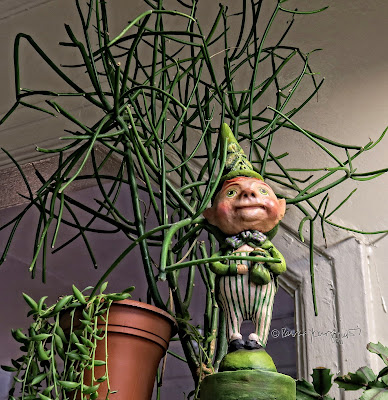 standing atop the container that is the home of a pencil-cactus which is growing in my succulent garden. He has a not-so-secret admirer who can be seen at his feet in the picture above, as well as in the following photograph, 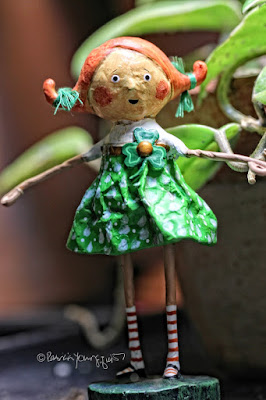 which was also taken in my succulent garden, the place where she first laid eyes on him! In any event, one of the musicians at the vow renewal can also be seen in the first picture atop this entry. He can be seen in the center towards the back of the aforementioned image, as well as in the photograph below, 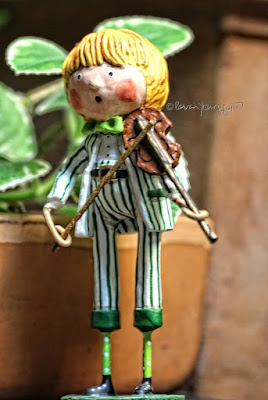 where he is playing a fiddle in my succulent garden.

As you may have noticed if you looked for him in within the picture atop this entry, a young lassie is standing near to him, offering treats; and she has her own photo-op, as seen in the next picture; 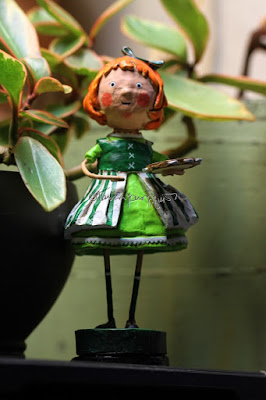 which was also taken in my succulent garden, but, is included in a prior post here on Blogger! And as you can see in the group shot atop this entry, which I am referencing, a young lad is standing behind her. Like all the others whom I've been discussing, he has his own photo-op and it can be seen below, 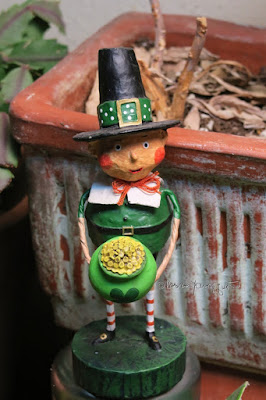 in an image taken of my succulent garden at the time of 2016's Saint Patrick's Day. However, this lad holds bragging rights for being included in my blog post re Hat Trivia; which you may access upon clicking here.

But to his left (in the first photo atop this entry), you undoubtedly noticed the fellow pictured below, 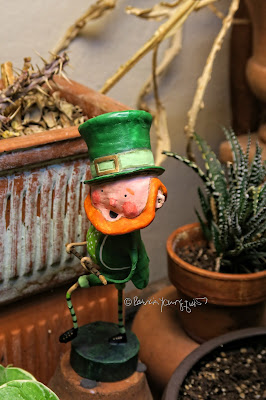 in yet another picture which was taken of the comings and goings in my succulent garden during the days surrounding Saint Patrick's Day 2016. He has a roving eye, but may not be as obvious about it as his friend, who is standing at the far right corner in the group photo, but when he isn't posing for a picture... he spends his time admiring the ladies, as evidenced in the picture directly below. 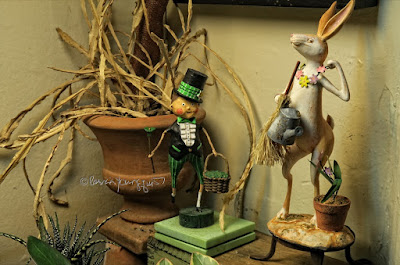 And that's it re the back stories of those attending the ceremony, but, with all due respect to the frogs who came to celebrate, I cannot close this blog entry without giving them recognition!

The frogs wearing jewels, as seen in the image below, 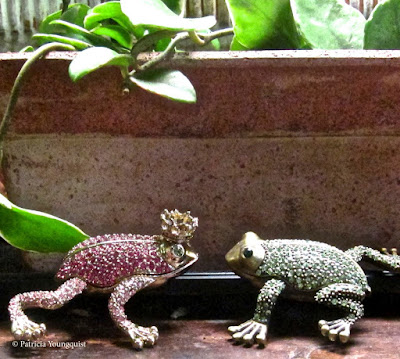 have been featured in a few of my posts here on Blogger as well as in an entry on hometalk.

And, the frog to the far right, 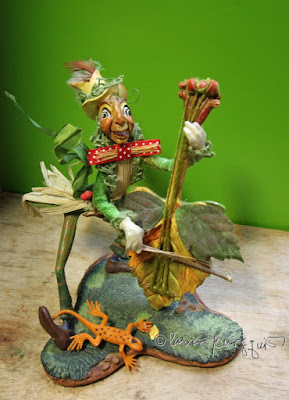 who is jamming with the musician playing the fiddle, is someone you might recognize from a prior entry here on Blogger.  However, in terms of the figurines, that are rendered in the likeness of frogs, my mind is on the following one, 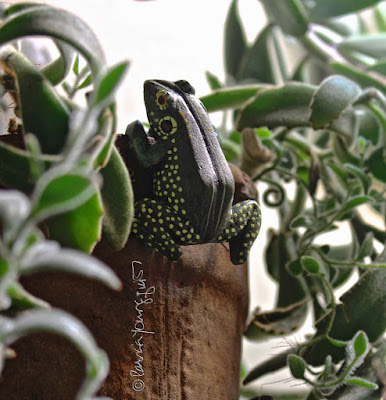 who can be seen (above) in my succulent garden, but also on the steeple of the church in the image atop this entry.

This "creature" was given to me a few years ago by my beloved friend, the late Donna De Solis, who is a person I dedicated a video to (at her son's request): I'm especially missing her these days, even though we never celebrated SAINT PATRICK'S DAY!