Tuesday's Truths WK 31: It's the 7th of March: The N'tl Month of Peanuts (and other things) 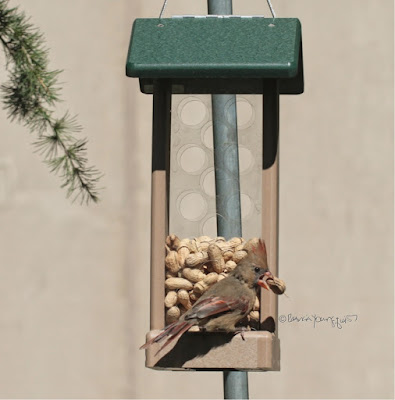 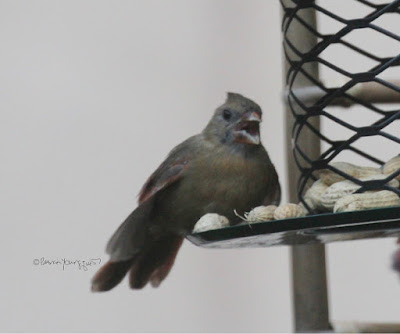 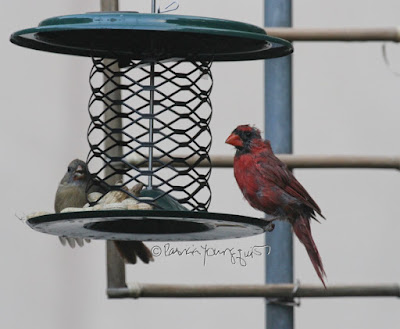 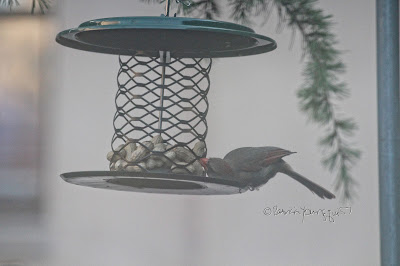 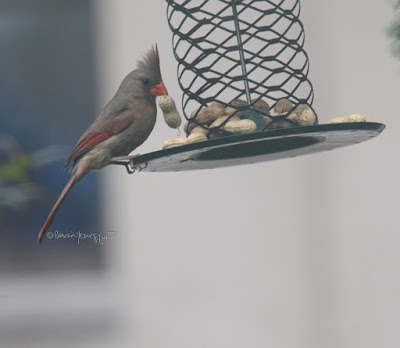 Welcome to Week Thirty-One of my Tuesday's Truths series. Today, March the Seventh, is the first Tuesday of this month for 2017. Because we are already at the seventh day mark for this month of March, I'd like to point out that one of the observances associated with it, causes March to be known as National Peanut Month. And, I dare say one could proclaim peanuts are for the birds!

The photos atop this entry may give you a sense of how I've come to this conclusion, for all five pictures feature the bird type known as the Northern Cardinal enjoying peanuts; and/or spending time at the bird feeders (designed to accommodate peanuts) that are in my rooftop garden here in NYC.

The first two photographs that can be seen there feature Cam's (the cardinal, who authored the book, Words In Our Beak Volume One) daughter, whom she named Peanut upon seeing how much her child loved this food. The third image shows Peanut with her father, Cam's husband Mac.

The fourth and fifth pictures feature Cam taking time from her writing for a "coffee break" of peanuts! All five of these pictures are ones you might recognize, dear reader, as I've included them in the past when posting here on Blogger, Facebook or tumblr.

They are also included in the ePub version of Cam's book, Words In Our Beak Volume One. (Peanut had not been been when Cam's iBook version of this book was published).

The folks at National Calendar claim that, "a peanut or groundnut (Arachis hypogaea) is a species in the family Fabaceae (commonly known as the bean, pea or legume family). Sometimes, you may hear peanuts referred to by Southerners as Goober or Goober Pea. This nickname for peanuts, was derived from the Africans who were enslaved during the 1600s and 1700s and called the plant 'nguba' meaning 'peanut.'

"Peanut cultivation and popularity in American food culture can be attributed to Dr. George Washington Carver, nicknamed “The Father of the Peanut” for his tireless devotion to this versatile legume. In fact, in 1925, Carver published a bulletin called, 'How to Grow the Peanut and 105 Ways of Preparing it for Human Consumption.'”

While Carver may have published a bulletin re ways for folks to prepare for consumption; a number of bird types, not just cardinals, like to consume these legume, and, I assume they do so without the use of Carver's manual.

These bird types include bluejays who can be seen availing themselves of this taste treat in a variety of circumstances (in the following pictures). 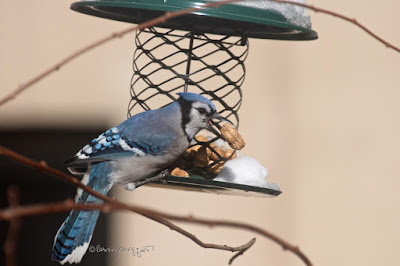 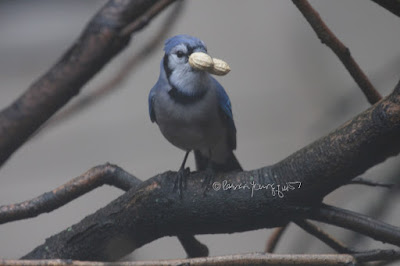 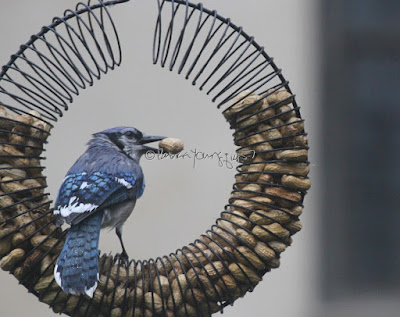 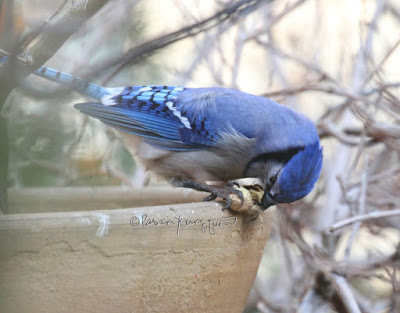 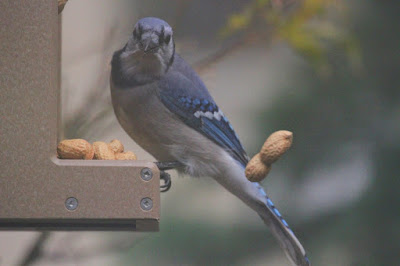 And Common Grackles, who also enjoy peanuts in all types of weather (as evidenced below). 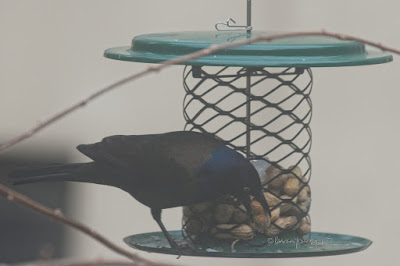 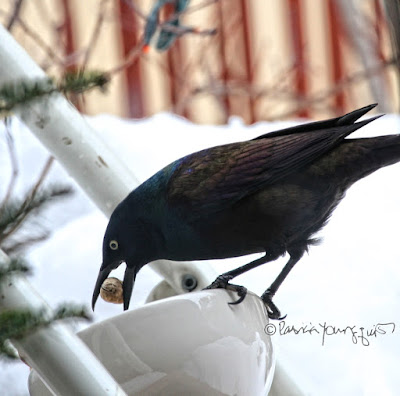 Additionally, Downy woodpeckers enjoy peanuts (as demonstrated by this one featured in the next picture where he/she is at my wreath shaped feeder. 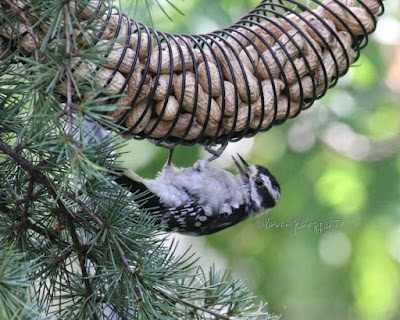 All pigeon varieties (two of which can be seen in the pictures directly below, like peanuts too, although their beak isn't as equipped to crack the legume's shell as the beaks of the aforementioned birds. 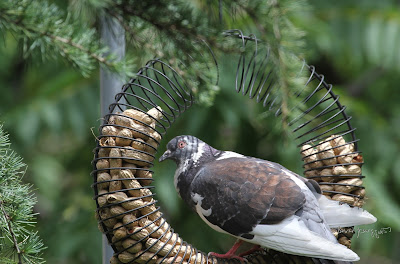 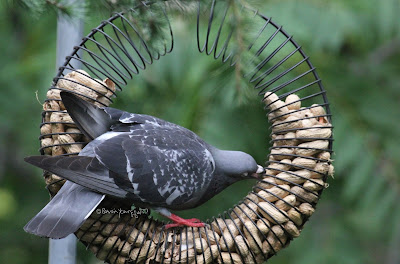 like peanuts too, although their beak isn't as equipped to crack the legume's shell as the beaks of the aforementioned birds.

Be that as it may, I confess that even though I've featured a number of bird types indulging in peanuts while spending time in my garden, National Peanut Month is certainly not something that's solely for the birds....  OR exclusive to the month of March; just ask any squirrel! 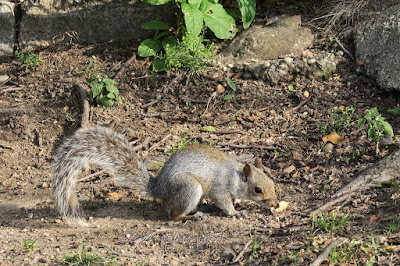 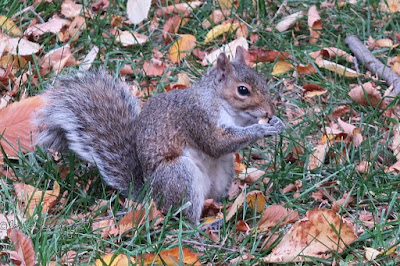 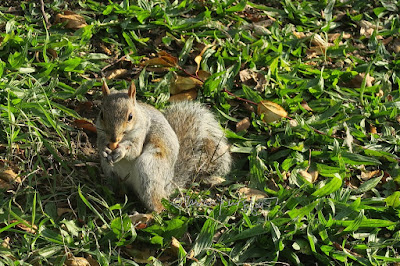