"The groundhog is like most other prophets; it delivers its prediction and disappears." (REPRISED) 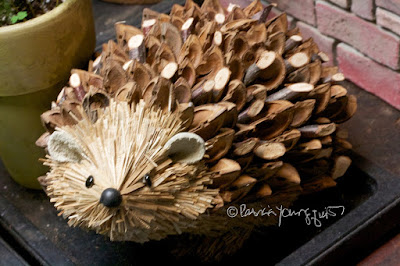 Today is Groundhog Day! This is a "holiday" with events whose celebrations date back to 1887 in the United States. However, traditions re this day started long before that, and the Romans looked to hedgehogs — not groundhogs — to forecast the ending of winter or the arrival of spring. However, when folks migrated to Pennsylvania, there weren't any hedgehogs to be found — so they used a groundhog instead!

One of my hedgehog figurines, who has spent time in my indoor succulent garden, has always been a bit "miffed" that the "role" of predicting the weather was delegated to a groundhog! Therefore, to appease him, I included his photograph, which is very similar to the one at the top of today's blog entry, in blog posts that I've made here on TLLG in bygone years. You may refer to those entries by clicking here as well as here.

My other hedgehog figurines seen in the pictures below, 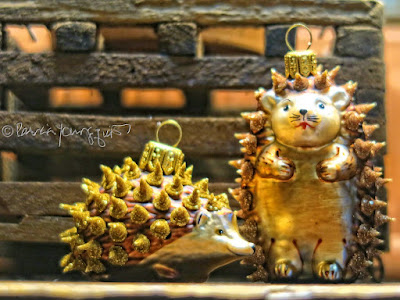 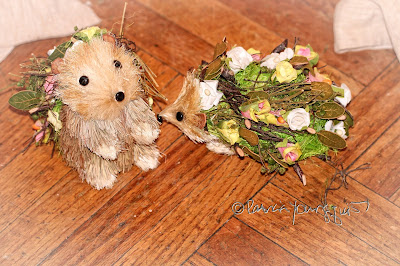 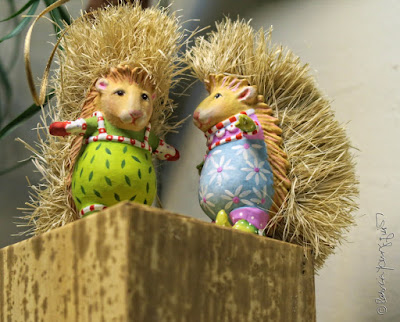 have no aspirations to take over the duties of the groundhog at will-he/she-see-his/her-shadow events, especially in NYC.

The reason they feel this way has to do with the fact that Charolette, a groundhog in Staten Island died as a result of an accident she was involved in when asked to show folks if she saw her shadow on Groundhog Day in 2014. At that time, the dignitary leading the ceremony was Mayor de Blasio.

Unbeknownst to the mayor or the crowd, a groundhog named Charolette had been drafted to fill in for Staten Island Chuck who normally performed this see-not see-shadow duty. It seemed the groundhog known as Chuck was relieved of his duties after he bit the then Mayor Mike Bloomberg at the will-he-or-won't-he see his shadow event in 2010.

The Staten Island Zoo lied to the public about exactly which groundhog it planned to trot out on that fateful day in 2014! The zoo claimed "it feared Chuck’s contentious relationship with Mayor Bloomberg (the groundhog had understandably bit Bloomberg on prior occasions) would carry over to the new administration. So it decided to bring out Charlotte in the hopes that she might prove more even-keeled in the new Mayor’s colossal hands. And according to a zoo insider who spoke to The New York Post, Charlotte’s handlers kept quiet about the switch to protect the groundhog brand.”

The brand may have been protected, but Charlotte was not, for Mayor de Blasio while wearing colossal gloves over his colossal hands, dropped the little animal! The mayor smiled abashedly. The handler quickly collected the fallen woodchuck as seen in the You Tube video posted below.

Then, nine months later, NYC found out the awful truth: "The zoo had concealed the fact that Charlotte had died one week after her fall. Charlotte, beloved granddaughter to Chuck and friend to all, had been dead for months, and the zoo hadn’t said a damn thing...

"... The New York Post reported on the alleged coverup saying "The stand-in was found dead in her enclosure at the Staten Island Zoo on Feb. 9 — and a necropsy determined she died from “'acute internal injuries,”' sources said.

"She (Charolette) had fallen nearly 6 feet when the mayor lost his grip during the Groundhog Day photo-op. Sources said her injuries were consistent with a fall.

"Instead of revealing the sad loss, the zoo — which gets nearly half of its $3.5 million in annual funding from the city — told the staff to keep the mayor’s office in the dark about the animal’s fate.

"... According to The Wall Street Journal, zoo officials did ultimately admit that Charlotte’s untimely end stemmed from 'internal injuries and bleeding....

"... Some might say there’s no need to 'suspect' anything when the facts of the matter are so plainly evident. And now, de Blasio has mysteriously and suddenly decided to skip out on this year’s Groundhog Day event altogether."

Therefore, this mornings Groundhog Day event in Staten Island carried on without the presence of a mayor and the groundhog performing the duty re 2017's onset of spring was this: New York can expect an early spring. I'm not sure how reliable this creature's prediction is, for groundhogs may be like politicians and tell people what they want to hear. And most people in  NYC seem to want to hear that spring will be here early, making the news welcoming.

Meanwhile, Punxatawney Phil, the groundhog who has been predicting the onset of spring since 1886 in Pennsylvania, begged to differ: He saw his shadow this morning, which means six more weeks of winter, the legend says.

Whatever, the case may be given the fates of Chuck and he first Charolette, I can hardly blame the groundhog for being like most other prophets: delivering its prediction and then disappearing. Nor can I blame the majority of my hedgehog figurines for not wanting to take over the role of groundhogs in predicting the onset of spring.