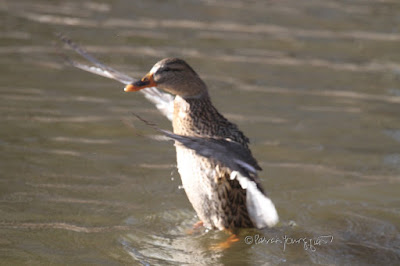 Welcome to week twenty-six of my Tuesday's Truths series here on Blogger; and it's already the last day of the month for 2017! Be that as it may, this past Sunday, I was in NYC's Central Park; and as it often happens when I'm there, I was entertained by a number of ducks, a bird type that spends a good deal of time in the park's bodies of water. The weather was very mild on that day, considering it is the month of January! A number of folks and members of various wild life communities, were taking advantage of the warm sun. this is evidenced by the photo of a female duck seen in the image atop this entry, where she appears to be acting as a music conductor!

In any event, it was certainly great to see her, as well as her duck-comrades on a winter's day in the park. For just this past Friday, in a post here on Blogger, I paid homage memory to the anniversary of the death of J.D. Salinger re his character's (Holden from "The Catcher in the Rye") "concern" for the fate of ducks during winter time in Central Park, I cited some passages re this, and if you'd like to refer to them, please click here. Today I'm offering specific answers to Holden's question re what ducks do in the winter.

According to a number of sources, including Ask a Naturalist, "Ducks, as well as many other birds, have a counter-current heat exchange system between the arteries and veins in their legs. Warm arterial blood flowing to the feet passes close to cold venous blood returning from the feet. The arterial blood warms up the venous blood, dropping in temperature as it does so. This means that the blood that flows through the feet is relatively cool. This keeps the feet supplied with just enough blood to provide tissues with food and oxygen, and just warm enough to avoid frostbite. But by limiting the temperature difference between the feet and the ice, heat loss is greatly reduced. Scientists who measured it calculated that Mallards lost only about 5% of their body heat through their feet at 0o C (32o F) 1. To put this in perspective, the rest of the duck is covered with feathers and in contact only with air, not ice, but because the body is relatively hot, 95% of the heat loss is from the head and body. Meanwhile, the cool feet sit on ice and give up very little heat.

"Less warm blood gets to the foot, keeping the foot cold and reducing the temperature difference between the foot and the ice. This reduces the flow of heat from the duck to the ice.
Bird’s legs and feet are relatively free of soft tissue and even the muscles that operate the foot are mostly located higher up in the leg and connected to the bones of the feet with long tendons. Because there isn’t much soft tissue in the lower legs and feet, there is less need for warm blood. Many birds also have valves in their leg arteries that control the blood flow, and there is evidence that some birds can pulse the blood to the foot. Every once in a while, warm blood flows to the foot to make sure it doesn’t suffer from frostbite. And when you see a duck or other bird standing on one foot in the cold, this probably serves to protect tissue reduce heat loss even further because the one leg that is tucked up under insulating feathers gets a chance to really warm up and recover from any potential cold damage, and with only one foot on the ice, the surface area in contact with a cold surface is cut in half!

And, so there, you have it, Holden Caulfield, and dear reader, this is one answer to how ducks survive winter conditions in Central Park. They also survive by preening as they were doing yesterday as seen in the following images. 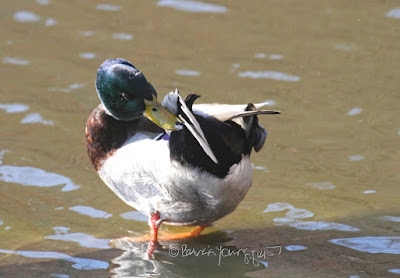 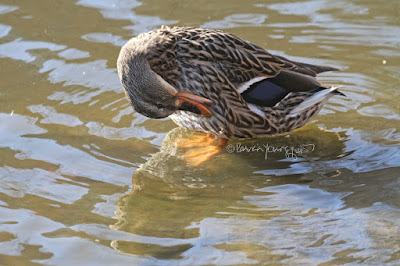 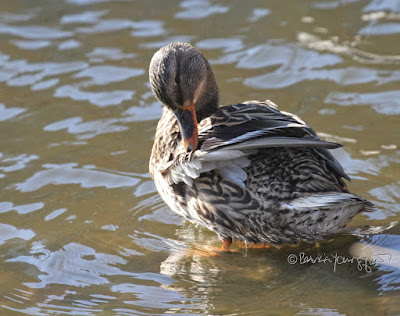 But this, is, as they say, another story; or in this case, another blog post!