Today, 1-26, Australia Celebrates "their" Day! (Crocodile Dundee is my connection!) 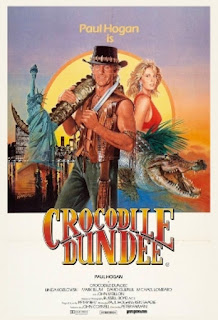 Today, January the 26th, is Australia Day! I haven't been to Australia as of this posting; but I did meet the Australian actor, Paul Hogan and film director Peter Fairman, on the set of the first version of the movie, Crocodile Dundee.

Paul Hogan can be seen in the image on the packaging of the film's DVD packaging. (This picture is very similar to one included in a the link for Crocodile Dundee, but it came from a general image page related to Paul Hogan.) In the image Hogan can be seen with Linda Kozlowski, whom I also met on the set. The scene that I played in was filmed at a mansion that was located forty-five minutes or so from NYC. This mansion was the fictional home of Sue Charlton, the female lead in the movie (played by Kozlowski). My role was that of a maid who worked at the mansion.

Crocodile Dundee One, is the first feature film that I worked on; therefore, I was thrilled to be there during that time. And it was one that had a title which included the name of my hometown: Dundee, Illinois. When I was cast as a maid at the mansion, my role was in the category known as "silent bit" within the Screen Actors Guild.

This category met that I was paid much less than a day player however, I received more money than the folks who worked as extras. It also met that I had a significant amount of camera time, but it was to be done in silence; for if an actor/actress uttered a sound, and it was audible in the movie, he/she qualified for residuals — something producers of many films try to avoid. In any event, when I was on the set, the actor Micheal Lombard (who played Kozlowski's v=character's father, and is pictured below), 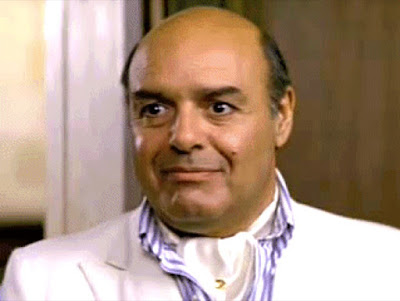 came up to me. introduced himself, and asked my name. Lombard then proceeded to tell me that during a dinner scene, he was going to call me by name, saying, "Patricia, please, a drink for Mr. Dundee (Paul Hogan)."

I was thrilled! And upon hearing my cue, "Patricia, please, a drink for Mr. Dundee," I delivered the cocktail to Mr. Dundee (Hogan), who thanked me, and I replied, "You're welcome."

The next thing I heard from Fairman (or was it the AD?) was "CUT! CUT! CUT!" Someone rushed over and said, if you are spoken to in the scene, just nod; "DON'T SAY ANYTHING!" Take two went off without a hitch and without a word from Patricia, the maid at the mansion.

Once the movie came out, my scene and appearance was quite prominent, but since I did not speak, I received no residual. Alas, my fifteen minutes of feature film fame.... and thus far my connection with Australia!