Wednesdays Wisdom: It's good to be with helmet and hose. 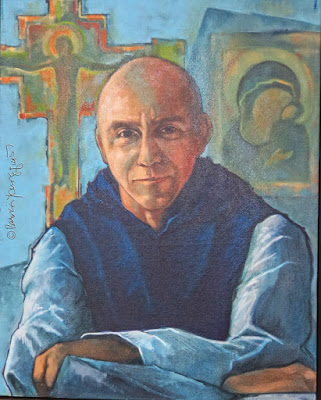 Folks are doing a number of things in response to the result of the 2016 presidential election, and most of those actions seem to be demonstrating or signing petitions.

Others are attending retreats to gain perspective, as well as to cleanse and renew their spirits. One such retreat was held on November 12th at Corpus Cristi Church in Manhattan. The retreat had been planed long before the political angst occurred in NYC (and throughout the world), but perhaps that was providential.

In any event, the retreat I am referring to was sponsored by the NYC Chapter of The Thomas Merton Society. The theme of the retreat was In Everything Mercy: Thomas Merton and Pope Francis on the Merciful Heart of God.

Christopher Pramuk led the event, and all the while, attendees had the pleasure of Thomas Merton smiling upon us, albeit from the vantage point of being in a painting by James Nally, which can be seen atop this blog entry.

A friend of mine (Lea A) from the neighborhood who attends The Church of the Blessed Sacrament — which I used to attend on a regular basis —  persuaded me to attend, and it was in my travel home from the retreat that I encountered  Leo (pictured below), who hopes to be a fireman. 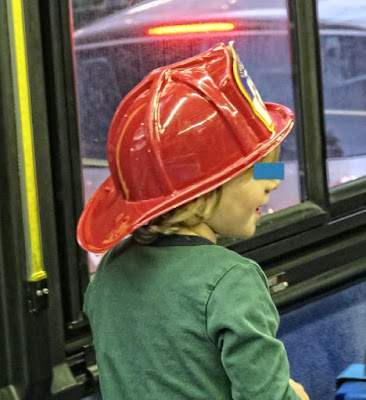 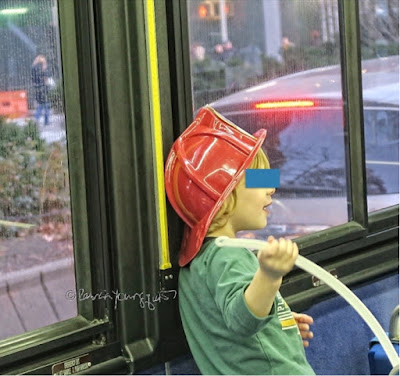 Seeing the young boy reminded me of part of what the comedian, Seth Meyers, had said in his opening monologue the day after the election, which is something I wrote about in a prior entry here on Blogger.

In the aforementioned post, I discussed that one of the things Meyer's mentioned was the fact that "on the morning after election day, he and his wife were sharing the breakfast table with their eight month old son. But apparently the only thing they shared with him was the table itself, for while they were engaged in conversations about the direction the country might be taking in the aftermath, their eight month old son was only involved in eating his pear.

"Meyers stated that while he and his wife speculated on the fate of The Supreme Court, their son gave them an "I-don't-know-what-you-guys-are-talking-about-but-I'm-with-pear" look."

The wisdom of "being with pear," is worth repeating, especially in terms of the election, for folks are still holding demonstrations (some resulting in violence) and much of the rhetoric is mean-spirited. Hardly a good feeling to have in a country which is preparing to celebrate Thanksgiving tomorrow!

Therefore, I am hoping to keep focused on "being with pear," and seeing Leo, engaged in being with hose and helmet was a good reminder of my intent.
Posted by The Last Leaf Gardener