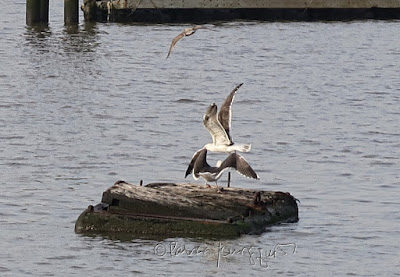 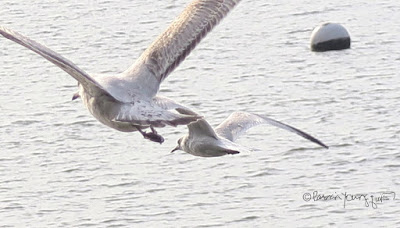 This past Wednesday, November the Second, was such an unseasonably warm day, so I went down by the riverside to visit the ducks, geese and seagulls, who spend a lot of time in NYC's Hudson River. (As you may recall, dear reader, I also went down to the riverside on an unseasonably warm October [the 20th] day to take in Shelia Berger's "Bird of Glory and Praise," a sculpture that is currently in Riverside Park, courtesy of The Art Students League.) And like my October visit to the river, once again, this past Wednesday I did see a number of seagulls, some are pictured in the images atop this blog entry.

However, I did not see ducks or geese as I usually do, but I did see squirrels enjoying autumn in NYC. One of them can be seen in the following images. 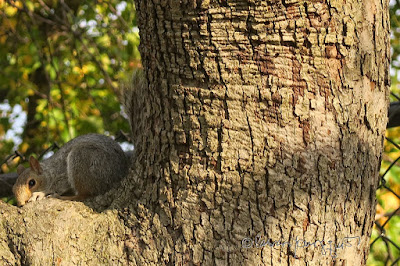 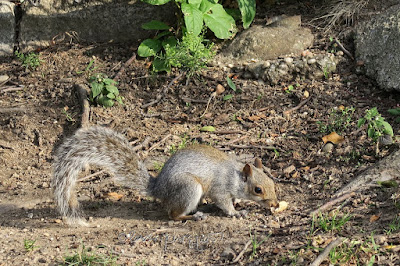 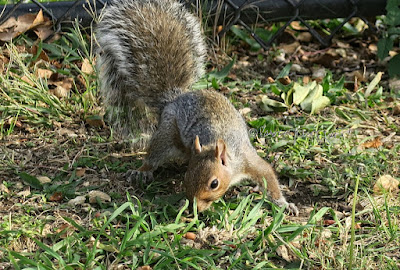 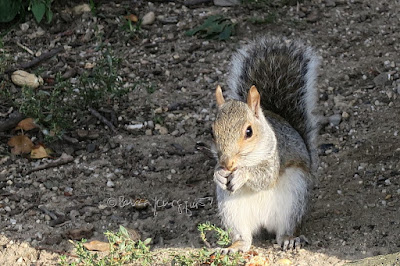 My observation of this adorable creature prompted me to recall the following quotation:

"If we had a keen vision of all that is ordinary in human life, it would be like hearing the grass grow or the squirrel's heart beat, and we should die of that roar which is the other side of silence."

This is a quote attributed to the author George Eliot. In a little over two weeks (November 22nd), it will be the day of George Eliot's birthday. George Eliot was born and named Mary Ann Evans on November 22nd, 1819, and wrote (as well as published) under the pen name, George Eliot. I had the pleasure of visiting Eliot's stomping grounds in 1992, when the delightful and generous Edna Dunne (pictured below in an uncredited image taken a number of years after I made her acquaintance), toured me around many interesting  places in the UK. I had gone to visit Edna in Coventry after completing studies in writing at London University. 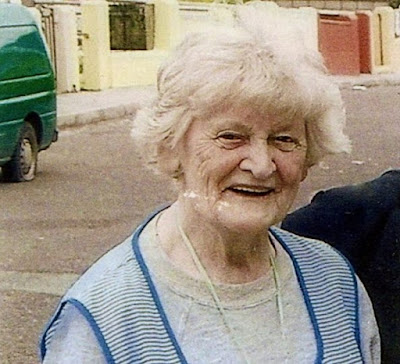 Because Edna knew of my interest in writing, one of the many places she took me to was the location of George Eliot's statue. 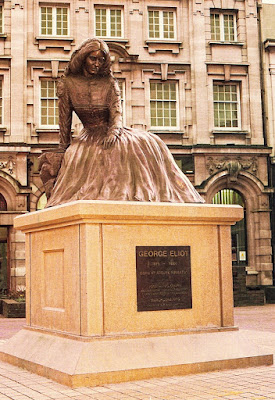 And yesterday, when seeing the squirrels in Riverside Park, promoting me to recall Eliot's quote, I thought about Mary Ann Evans feeling the need to use a man's name in order to have her literary works recognized. I also thought about my cardinal, Cam, whose book Words In Our BeaK, Volume One, addresses her feelings about how to get recognition as a female. 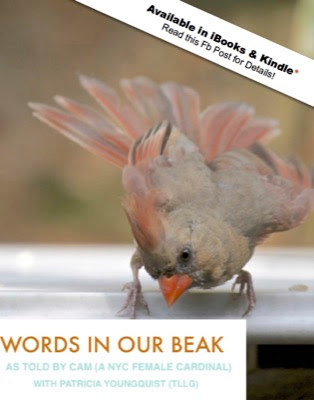 In her book, Cam has made some interesting points about the discrimination towards female cardinals, including the fact that a number of ornithologists describe her bird types gender "to be dull in coloring." I believe that Cam is beautiful and would never describe her as "dull looking!" But I can certainly understand her feelings re her appearance to have been affected by the remarks of others, I struggle with this too! And as I've stated George Eliot did too! Re the appearance of George Eliot, Henry James is known to have stated the following:

"She had a low forehead, a dull grey eye, a vast pendulous nose, a huge mouth full of uneven teeth and a chin and jawbone qui n'en finissent pas... Now in this vast ugliness resides a most powerful beauty which, in a very few minutes, steals forth and charms the mind, so that you end, as I ended, in falling in love with her. Yes, behold me in love with this great horse-faced bluestocking."

But getting back to Cam's book her main purpose in writing it was never to bemoan what others thought of her appearance, rather, it is to open readers to a simple understanding of the winged world and their environment.

Set in my rooftop garden in New York City, the story is told in the voice of Cam, a female cardinal, who visits it. Words In Our Beak is directed to children and adults who are curious about birds, and want to learn about them from a unique perspective. The book includes hundreds of images of flora and fauna, links to movies, as well as to informative narratives that have been created by the co-author, who is me, Patricia Youngquist, The Last Leaf Gardener.

I am delighted that Cam has involved me in her projects and I encourage you, dear reader, to check out her book, as well as the postcards I created to help her make folks aware of the beauty in Words In Our Beak, Volume One.