Tuesday's Truths Week Eleven: The Morning Sun is Shining Like a RUBBER-BAND Ball? 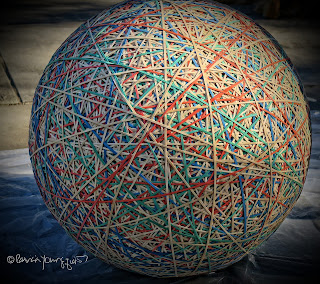 Yesterday, here on Blogger, I reported on a butterfly that I had seen alighting on various flowers in Central Park near the 72nd Street entrance this Sunday. And on that day, as I walked in the park on the road alongside the body of water that is usually occupied by turtles, ducks, geese, as well as with folks in rented row boats, I came upon Zack Hample. He was demonstrating how he created his prized possession: a ball that he made of rubber bands. His ball has gained 10 pounds since 2014 when it weighed in at 250 pounds! The image posted above (which I took in Central Park) shows Hample's ball with its weight gain.

However, since this past Sunday when I saw Hample demonstrating how he created his ball, I'm sure the creation gained some weight, for Hample was letting passers by add rubber bands to his ball, which he started making as a toddler (he is now thirty-nine years old)! If you'd like to read more about Hample and see a video demonstration on how he created his rubber band ball, there is a great article in Dailymail.com.

The only warning I will give you regarding Hample's ball talk is that it may cause you to think of the golden oldie song, Red Rubber Ball, by Cyrkle, and in doing so, you may find yourself switching out Cyrkle's words, "The morning sun is shining like a red rubber ball," and replacing them with "the morning sun is shining like a rubber band ball." —  this could then lead to you to be afflicted with a case of ohrwurms!
Posted by The Last Leaf Gardener