My experience on the other side of a camera. 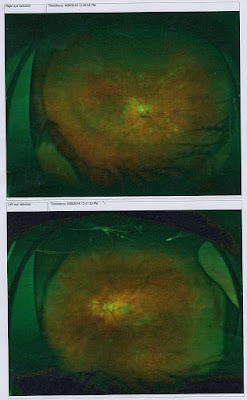 Because I only have "counting fingers" vision in my left eye, and need glasses to enable me to see out of my right eye, folks seem to think it's interesting that I produce photographic images. I've been interviewed on two major radio stations (WINS and WBAI) re processes I've used to create the aforementioned types of photographs. Both my black and white pictures as well as my color images, which are kaleidoscopic, have been featured in a number of galleries here in NYC.

Most of the photographs that were represented in my exhibitions can be found on my web-site, Patricia Youngquist, The Last Leaf Gardener. For the past seven years, I've mostly used my abilities in photography to give voice to the flora growing in my rooftop garden as well as the array of birds and insects which visit it. Some pictures from this endeavor are included within the pages of my web-site, others have been used in my garden-themed movies which can be found on my Vimeo Channel. Additionally many of my pictures featuring flora as well  fauna can be found here on Blogger as well as Facebook, tumblr, hometalk, Instagram, Pinterest and twitter.

And as many of my readers know, my book, Words In Our Beak Volume One, which is written from a bird's perspective, contains hundreds of pictures featuring the flora which grows in my garden as well as photographs of the birds and insects that visit it.

All of this info is a long way of saying that I have spent a lot of time behind a camera! However, for the past two days I've had to be in front of a type of camera known as an Optos (seen below) to have pictures taken of the back of my eyes. 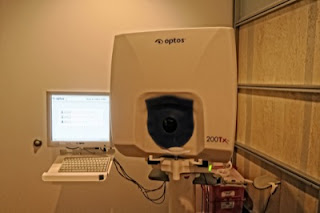 What the Optos saw and it is not good news for me. I now have a large floater in my right eye, which is the only one of my eyes that serves me. Floaters, as you may know, dear reader, are a normal event that occurs after certain birthdays. They mainly are an annoyance that one has to live through until his/her brain begins to ignore them. However, in instances like the one I have with my eye-sight, there can be cause for great concern.


According to The National Eye Institute, "Floaters are little “cobwebs” or specks that float about in your field of vision. They are small, dark, shadowy shapes that can look like spots, thread-like strands, or squiggly lines. They move as your eyes move and seem to dart away when you try to look at them directly. They do not follow your eye movements precisely, and usually drift when your eyes stop moving."

The National Eye Institute states the following information re floaters: "Sometimes a section of the vitreous (which is what a floater is made of) pulls the fine fibers away from the retina all at once, rather than gradually, causing many new floaters to appear suddenly. This is called a vitreous detachment, which in most cases is not sight-threatening and requires no treatment."

However the Institute warns that "a sudden increase in floaters, possibly accompanied by light flashes or peripheral (side) vision loss, could indicate a retinal detachment. A retinal detachment occurs when any part of the retina, the eye’s light-sensitive tissue, is lifted or pulled from its normal position at the back wall of the eye. "

And the Institute empathizes the fact that a "retinal detachment is a serious condition and should always be considered an emergency. If left untreated, it can lead to permanent visual impairment within two or three days or even blindness in the eye."

Now that the existence of floaters has been detected in the eye that I am dependent on for seeing anything, I am very concerned. I have the upmost confidence in the eye surgeon, Dr. Kimberly Sippel, who has performed cataract surgeries on each of my eyes, and she is the one who referred me to Dr. Mrinali Gupta, who is the retinal specialist at the facility where Dr. Sippel works. I saw Dr. Gupta this past June because my eye-condition warrants I see a retinal specialist on a regular basis.

This past Tuesday when I saw Dr. Sippel for a routine visit, and complained that I might have a large floater, she recommended I have pictures taken of the back of my eye with the Optos device.  Upon seeing the pictures that the device took, she urged me to see Dr. Gupta immediately; and she even used her own position to get me an appointment for the following day, which was yesterday, Wednesday, September the twenty-eighth. Dr. Gupta ordered another set of photos be taken from the Optus device and these are the images I posted atop this blog entry

I have to go back to have Dr. Gupta monitor what's happening in October, but if I have any symptoms that indicate the floater is interfering with my retina, I will need to go to he facility's hospital immediately. Everyone  on staff where I am treated for my eyes are very concerned about the possibility of my good eye being compromised as am I.