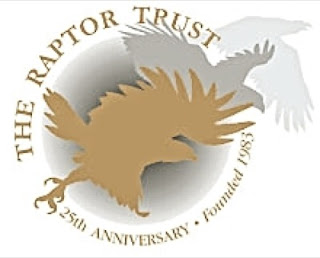 Those of you who follow my cyber-venues may recall that on April 5th 2016, I participated in the rescue of an injured Northern Flicker whom I ultimately named Super. He had severe injuries that The Wild Bird Fund (AKA The WBF, which is the only bird rehabilitation facility in NYC, the city where I live) tried to address.

Fortunately I was able to visit Super on a weekly basis from the day I brought him to The WBF (4-5-16) until May 14, 2016. And within a number of posts, during that time period, I "reported" on his progress here on Blogger; as well as tumblr, Facebook, and Twitter.

As I've just said, the last time I saw Super at The WBF was May 14th 2016. During that visit I was given the good news that Super was being transferred to The Raptor Trust, a remarkable rehabilitation center for birds. This was very exciting to hear and caused me to be very encouraged for "my" sweet avian "friend."
Unfortunately, later  that same day — in the evening — I had an accident causing me to break my nose, bruise my elbow, as well as to break a few ribs. Additionally I sustained  a severe gash to my forehead, resulting in a need for nine stitches. Moreover, my much-needed eye-glasses were smashed beyond repair, and I still need to replace them. Therefore, my ability to check in to see how Super fared the move to The Raptor Trust was impossible, for The WBF is too busy to handle phone correspondence re the prognosis of a given bird; and any news that I had received on Super's well-being had been by my checking on him in person.

But yesterday, I had a follow-up appointment re my broken nose, and the facility that handles these types of medical issues is just a bit north (30 blocks) of The WBF, so I decided to check on Super when I was en-route from the medical facility to my home.

I was told by The WBF's director that Super's move had gone well, and she was optimistic about the fact that he had been accepted there. She raved about their facilities. However she did not know how Super was coming along. So this morning I took it upon myself to find out about Super's fate and contacted The Raptor Trust, even though I did not know what name — if any— was assigned to him when he was moved there.

I was very fortunate that Diane Soucy, the woman who founded The Raptor Trust with her husband, Leonard J. Soucy (who has since died), happened to pick up my phone call and was willing to look into what had happened to Super. But she called me back with the sad news that the facility had to euthanize Super and explained that X-rays had revealed the extent of many injuries.

The WBF does not have X-ray equipment; but I believe that on occasion, they are able to get X-rays for birds who wind up in their facility. I know WBF's director had mentioned wanting Super to be X-rayed early on, but I don't think that was ever able to be arranged. It's impossible to determine if Super had been able to get an X-ray early on if he could've been treated for injures that The Raptor Trust discovered.

In any event, I am saddened by this news, yet at the same time grateful that Super's situation caused me to learn of the need for The WBF to have more access to X-raying injured birds; and I hope that if Cam's book (Words In Our Beak Volume One), ever takes off, I'll be able to donate this much needed equipment-use fees to The WBF.

I'm also grateful to have made contact with Diane Soucy and am making it a point to investigate how I might donate some of my bird-themed postcards (which are now on my web-site, PatriciaYoungquist.com) to their gift shop. I'd be happy to have Cam's book placed there too, but so far it is only in digital format.

Besides, I have to wait until I heal — and get new glasses — before I can do much about realizing any of my dreams to help the avian community!
Posted by The Last Leaf Gardener