The Consequence of Reporting on Sturnus vulgaris (European starlings) 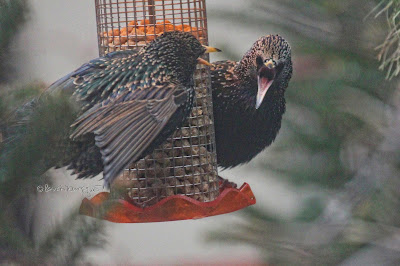 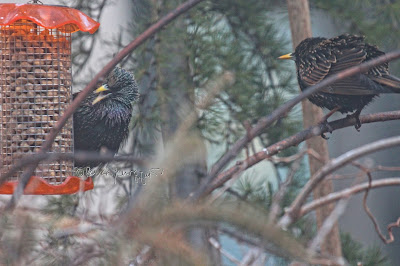 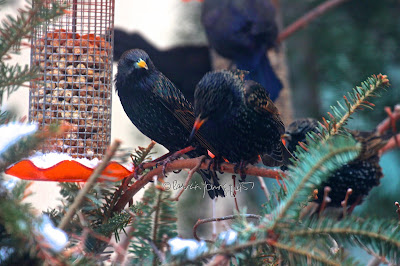 On Sunday, March 16th 2014, the day before a number of folks were due to celebrate the Saint Patrick's Day holiday, I realized another holiday was taking place. The holiday I am referring to is the 124th anniversary of the arrival of the bird type known as Sturnus vulgaris (European starlings) in New York City, the city where I live and have an urban garden that this bird type is now visiting. It appears they truly enjoy noshing here as evidenced by the photos above.

I did find it interesting to learn about the circumstances surrounding the anniversary of the their arrival in Manhattan and I posted the information on hometalk in honor of their day, March 16th 1890. And here's a "copy" of what I wrote:

We all know these starlings are mixing up their plays!
For starlings were "supposed" to shout, "Mortimer! Mortimer! Mortimer! Mortimer!," (at Hotspur's urging) in King Henry the Fourth, but "Hotspur never has a chance to carry out his project, and Shakespeare never mentioned starlings again . . . *
" . . . There are 725 references to birds in his plays and many others in his poems. Nightingales, swans, eagles, doves and crows are mentioned often. The starling ranks with the loon and the osprey in being mentioned only once. Nevertheless, in the spring of 1890, almost 300 years after Shakespeare wrote King Henry IV, 60 starlings were released in New York's Central Park as a direct result of Hotspur's speech, and from these, and another shipment the following spring, all the starlings in North America are descended.


"The man who released the birds was Eugene Schieffelin, an elegant and eccentric figure in New York high society. The date was March 16, a cold and disagreeable Sunday, with the early morning temperature at 25. Schieffelin hoped to bring into the U.S. all the birds Shakespeare mentioned that were not native to North America. If he could have foreseen the results he might very well have made an exception in the case of the starling. For there are now more starlings in the U.S. than almost any other species, and all the evidence indicates they will soon be the most numerous birds in the land.
"Schieffelin lived at the time in patrician comfort on Madison Avenue near 65th Street, a short block from the woods of Central Park. He was lean, handsome, aristocratic, with thin features, a prominent nose and a thick drooping mustache. He is given passing mention in guidebooks to American land birds when they take up, sometimes with ill-concealed bitterness, the task of identifying the starling."
And so, today, March 16th 2014, is a holiday for the European starling, as it is their 124th anniversary of being in New York City's Central Park, a park where Shakespeare's plays are performed at The Delacorte Theater.
The starlings in my garden claim they have seen most every one of the theatrical performances and have thus earned bragging rights to quote the playwright and say: "Mortimer! Mortimer! Mortimer! Mortimer! Wherefore art thou, Mortimer?"
Do I have the heart to tell them they are combining plays in their "rendition"?

I could never have anticipated an email that I got from a stranger who was outraged at me, and stated, "there is no room in the gardening world for people who love starlings."

Now, I must confess, that just as some of my visiting birds have been intimidated by the presence of starlings in my garden, I am a bit intimidated in posting within my own cyber-venues! However, I must also confess that I'm often entertained by the antics of the European starlings when they spend time in my garden. Below are a few more photographs of them doing this. 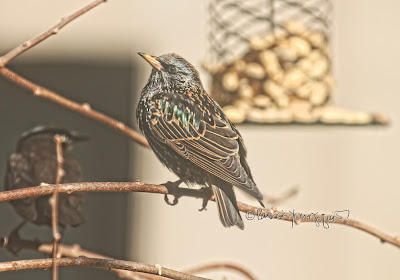 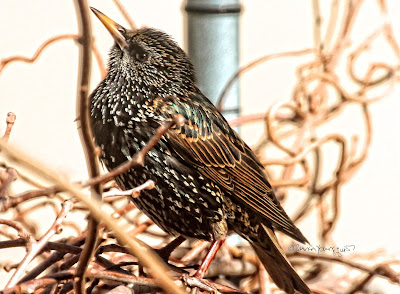