For my Ajuga & Her "unacknowledged" Friends 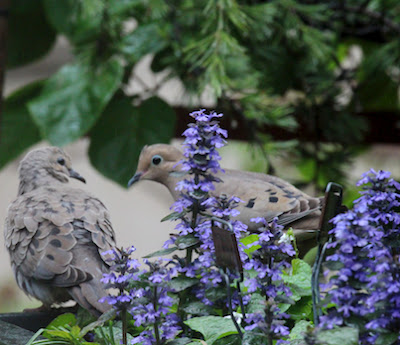 The other day, these two mourning doves, sitting atop the container that "houses" my Actinida kolomikta and Actimida (Kiwi Vines), were having a heart to heart convo. They were discussing how they felt about the fact that unlike "some birds" that visit my garden, they do not have a baseball team named for them!
The doves were referring to Mac (Cam's beau), my "lone" male cardinal and the team known as The Saint Louis Cardinals; as well as a "lone" bluejay and the team known as The Toronto Bluejays.

The aforementioned birds are pictured (respectively) below (in images that were posted in entries on TLLG's Facebook Page this morning). 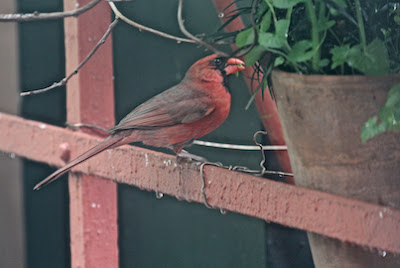 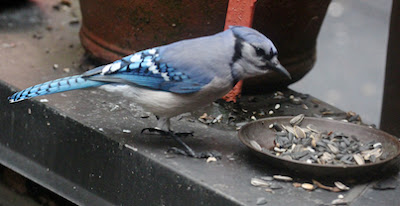 As the mourning doves continued discussing the injustices they felt about not having a baseball team named after them, my Ajuga flowers, who are planted behind where the convo was taking place, reprimanded them, saying that there were a number of birds who visit this garden who do not have a sports team named for them including a "lone" chickadee, common grackles, dark-eyed juncos, a "lone" hairy woodpecker, house finches, a "lone" rose-breasted grosbeak, tufted titmouses, and white-breasted sparrows.

"Moreover," the ajuga flowers said in unison, "neither the cardinal or the bluejay is happy about having a baseball team named after them!" And although an oriole has yet to visit here, the ajuga suspects they wouldn't care for The Baltimore Orioles "association" either!

"However," the ajugas said, "both the cardinal and the bluejay enjoy being featured on Facebook and in other cyber-venues!"

Then the ajugas pointed out, if anyone should feel excluded, it should be them, for they were not included in TLLG's postings for Water a Flower Day, which occurred last Thursday!

And now, to make it up to the ajugas and the other flowers who were not represented in the photo-ops for Water a Flower Day, I'm including their images below, beginning with the ajuga.


Of the seven types of flowers "show-cased" in the photographs above, only the flowers from my ajuga and chives are still in bloom as of this posting!

In fact, the ajuga and the chives were the only ones of these seven that were around for Water a Flower Day, but I have included the others,out of respect for the "serving" they did in enhancing my garden, as well as for my good wishes for them to get a good sleep and return next spring!

In any event, whilst I am honoring them, let me say this: the flowers from my contorted hazelnut shrub were first timers but like the others (including my couleur cordial tulips) had a short stay here this spring, but during their time here, they lived life to the fullest, as did the peonies and muscaris, which was discussed in a previous entry here on Blogger.

Three tulip families, The Kaufmannianas and The Parrot-Blumex Family, as well as The Tarda Tulip Family, all who were so much a part of the 2012 season, did not fare well this 2013 spring. However, since they are now asleep until spring of 2014, I am posting their photo-ops as a thank you for the 2012 season and as an incentive to come back in 2014.

The Kaufmannianas seen in a family photo below, 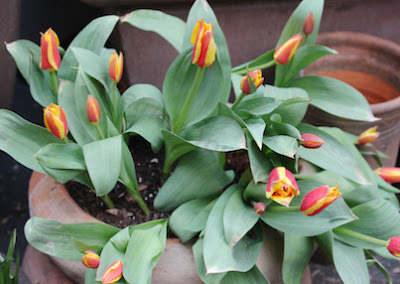 arrived quite early this 2013 season which they had also done in 2012!

And, as you may recall, dear reader, in 2012, they thrived and thrived whilst participating in a number of my Virtual Stories (mini movies) that can still be viewed within my Vimeo Library!

Unfortunately, the up/down/up/down/up/down temperatures and other weather conditions (wind, rain, unexpected snow) of NYC's 2013 spring cut the time they were able to spend here, as discussed in a previous post. 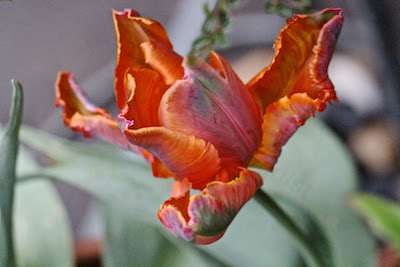 Be that as it may, spent flower or not, if you followed my campaign last year, and/or are familiar with the content of my cyber-venues, then you may recall that I find "spent" flowers to be quite attractive as I subscribe to the Herb-Gardener-philosophy. The dearly departed Mr. Gardener once wrote (in the play I'm Not Rappaport), "The very old, they are miracles like the just born, close to the end is precious like close to the beginning."

As you may know, I used Mr. Gardener's quote as a slogan for my campaign. Moreover, I submitted an image of a flower (from last year's parrot blumex tulip) which was similar to the image directly above (in  terms of feeling) for the Times Square Art Competition.

As for the tardas, they did produce a few flowers which were featured in a prior post here on Blogger, but basically they struggled, although they kept their sense of humor, holding their petals up as if they were a sun-visor, which is evidenced in the image below. 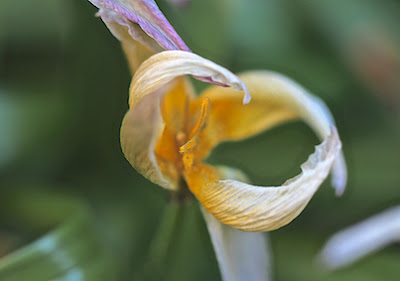 By the way, the tardas, as well as the parrot blumexes, were also featured in the aforementioned sneak preview of the lives of what grows in my garden (which, as I've stated, was also produced for last year's indiegogo campaign).

But at least the kaufmannianas, parrot blumexes, and tardas, did get the opportunity to flower in 2013, even it was only for a short time! For their cousin, the Snow Parrot Tulips,' had their springtime completely cut when an unexpected spring snowfall injured its bulbs, and the only glimpse it had of the 2013 spring season was from the perspective of a few "pieces of foliage" as seen below. 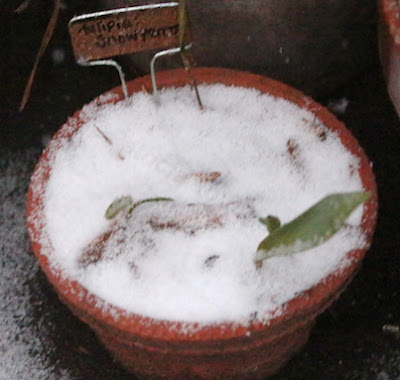 Sadly, the snow parrot tulips may have had their day; the unexpected weather probably did their bulbs in, but time will tell come next season! At least in 2012, they enjoyed being featured in the aforementioned sneak preview of the lives of what grows in my garden (which, as I've been stating, was also produced for last year's indiegogo campaign).

The other flowers that did not come back for the 2013 season were the precious flowers from my Heirloom Original Poet's Daffodils, although their luscious green foliage certainly looked (and continues to look) healthy, as evidenced in the image posted below, where it can be seen next to blades of Ophipogon planiscapus (Black Mondo Grass). 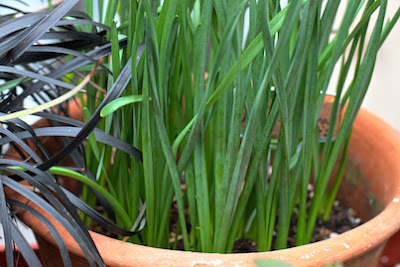 In 2012 the flowers from Heirloom Original Poet's Daffodils were featured in one of my garden themed "flip book comic strips", and hopefully their bulbs are just resting this year to gear up for 2014! I'd love to produce a sequel to that strip whenever the flowers are ready!

So there you have it, my dear ajuga, an acknowledgment of all the flowers that grow here as of this posting (except for the teeney tiny ones on my Black Mondo Grass triplets as well as on my Japanese Grass twins); and I thank you for bringing the need to do so (document this) to my attention!

But before I sign off, here (below) is an image of my thriving Autumn Clematis: 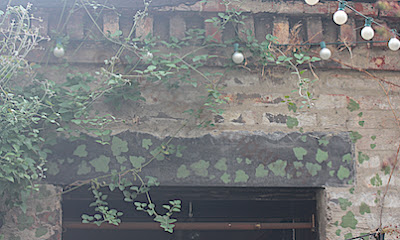 Its flowers are not "due" until autumn (hence its name), but from the looks of "things," I think it's fair to anticipate that this vine will produce a number of flowers!

And I sincerely hope this post has consoled you dear ajuga, but do tell, how might I alleviate the concerns of the mourning doves re not having a baseball team named for them? After all, it was your eavesdropping on their convo that prompted this blog entry!

AUTHOR'S NOTE: I realize, dear reader, that today is Tuesday, and in the past, I have reserved Tuesdays for referring you to tumblr, but, as you may know, I have not done that in quite some time. I am still posting regularly on tumblr and have been referring folks there from my TLLG's FB Page and Pinterest Boards; you are most welcome to visit me there any time: you needn't wait until it's a Tuesday!
Posted by The Last Leaf Gardener