Is Spring of 2013 FINALLY, FINALLY springing? (PART FIVE of FIVE) ASK THE PLANTS, ORNAMENTAL GRASSES and a few FLOWERS!


April showers woke-up Ajuga flowers! These are the light purple ones seen here where they "live" with my Crocuses in the "home" of my Actinida kolomikta and Actimida (Kiwi Vines). They are all thrilled to have Cam's beau alight on their "home," especially this morning when the crocuses and ajuga are scheduled to be some of the "things" featured in today's post: part five of my series (which I introduced this past Friday on Blogger) where the things I grow are assisting me in answering the question: Is Spring of 2013 FINALLY, FINLLY springing?

Both the ajuga and the crocuses share the "limelight" today with my plants (Farfugium japonicum AKA 'Cristata', Creeping Jenny, and my Pyracantha coccinea AKA Orange Charmer Firethorn), as well as my ornamental grasses (The Hakanechola Macra Twins AKA Japanese Forest Grass All Gold and my Ophipogon planiscapus Triplets AKA Black Mondo Grass).
We will begin with the plants, starting with my 'Cristata' and Orange Charmer, who as of this posting are sitting side by side at  the north end of my roof extension (terrace) garden as seen in the image below. 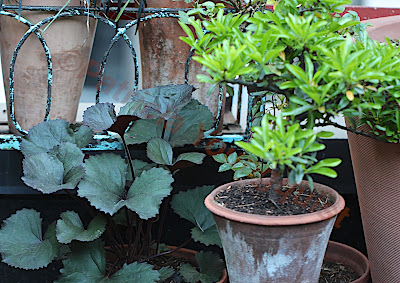 'Cristata' is the one to the left, and although both of these gals have beautiful foliage, the flowers they produce is not annually. 'Cristata' had one flower when I got her in 2005 or 2006 but she did not produce any flowers until last year and her "production" consisted of one single flower which can be seen below. 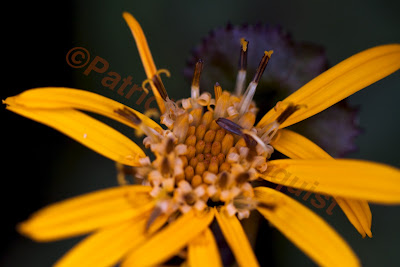 This image was featured with a "story" on TLLG's tumblr pages in July of 2012. As for the Orange Charmer, it has been in my garden since 2010 and was a gift from Juan V. Last year was the first time it flowered and an image of its lovely blooms can be found below. 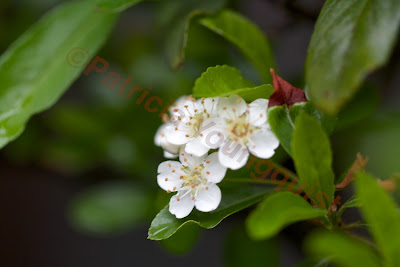 At this time both my Farfugium japonicum and my Pyracantha coccinea will not weigh in with their thoughts on the question being raised in this entry as they agree it's too early for ether on e of them to pass judgement, so please stay tuned for when they are ready to join the convo!

My other plant, Creeping Jenny, gets her name from her ability to creep along as seen below. 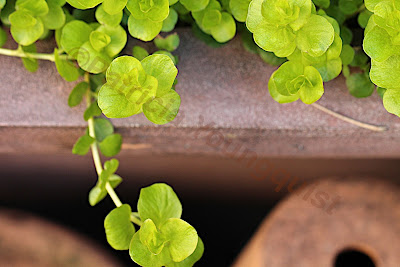 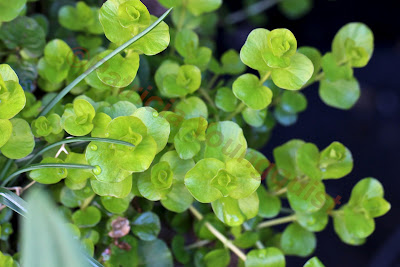 "Jenny" lives in the same "home" as my mucari family and autumn clematis, a fact which was discussed in yesterday's entry here on Blogger.

The purple hues of the muscaris and the limey-green of my creepinj jenny compliment each other as seen in the following image. 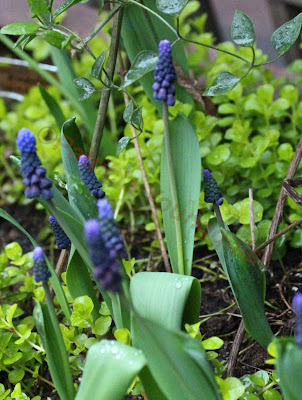 The creeping jenny has been with me since late summer of 2012; however, in September of 2012, a relatively short time since her having arrived in my garden had to be uprooted to "make way" for a so-called renovation.

As I've stated in prior posts, this upheaval had to be done to accommodate "repairs" to my roof extension garden, and, once again, if you'd like to read about it you may do so by clicking here as well as here and here.

I'm very thankful to see that jenny has bounced back for the 2013 season and that she is thriving! Regarding my ornamental grasses, the Hakanechola Macra  Twins and my Ophipogon planiscapus Triplets — as of this posting — also seem to be thriving! The Hakanechola Macra has already been producing flowers this year as seen in the pictures below. 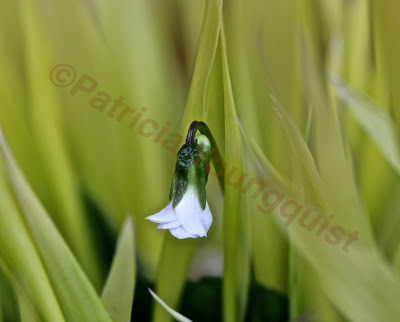 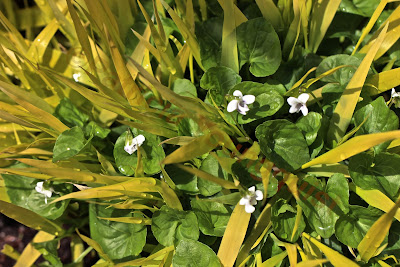 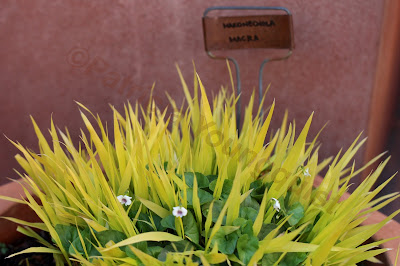 The first in the series of the Japanese grasses' pictures was seen onTLLG's Facebook page on April 21st of 2012 and the latter of these is a "candidate" for my much delayed name tag project!

Perhaps Cam provided the inspiration for my Japanese grass to flower so early? (After all this grass does have a "bird's-eye" view of her!)

My black mondo grasses have also begun to flower, however, first they had to endure an unexpected day-before-the-official-onset spring snowstorm! 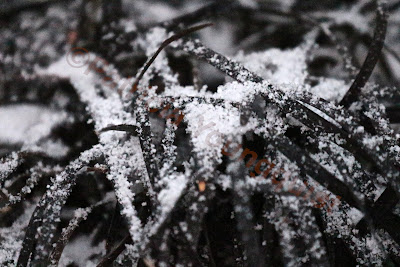 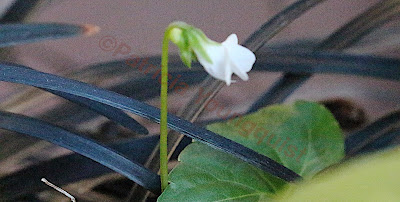 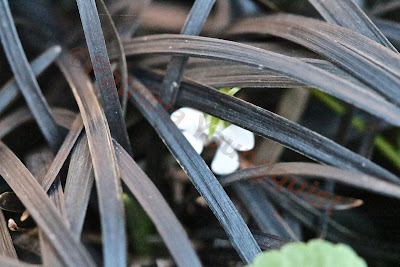 For your information, dear reader, my black mondos are also contenders for my much delayed name tag project! 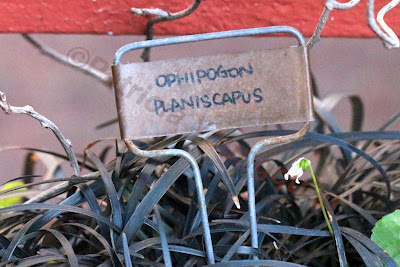 And like the Japanese grasses, perhaps Cam provided the inspiration for my black mondos to flower so early? (After all they also have a "bird's-eye" view of her, with what appears to be a mutual admiration as evidenced in the last image of the series posted below.)


This concludes the weighing in by my plants and grasses, and now, before I end this post, two more flowers (the ajuga and the crocuses) will have their say!

As I've said the ajugas "live" in the  same "home" as my kiwi vines. These little periwinkle colored flowers are just beginning to bloom and are enjoying catching some rays as seen in the pictures below. 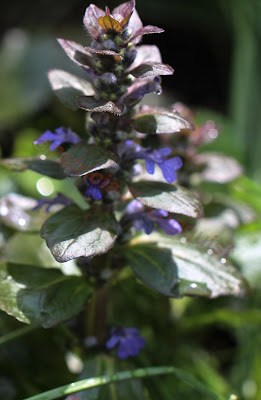 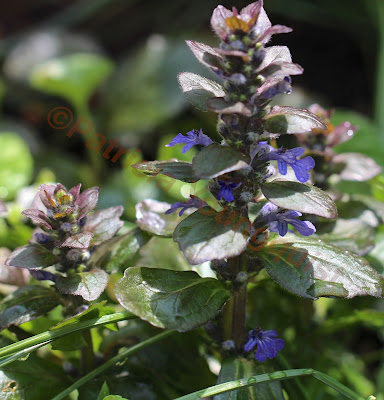 The ajugas have been with me since 2005 or 2006, and in September of 2012, they also had to be uprooted to "make way" for the so-called renovation to my garden.

As I've stated in prior posts, this upheaval had to be done to accommodate "repairs" to my roof extension garden, and, once again, if you'd like to read about it you may do so by clicking here as well as here and here.

I'm most grateful to see that the ajugas have come back for the 2013 season; and it appears Cam's beau is too, for he seemed in awe of their beauty when he visited them a little after six o'clock this morning, as evidenced in the image atop today's blog entry and in the following images!


The latter of these image is another contender for my much delayed name tag project. Meanwhile in terms of "this project," my five-part series, the last ones to weigh in are my crocuses.

As most gardeners know, crocuses are usually the first ones in any garden to awaken from a long winter's nap. And my crocuses were no exception! They were wide awake in March, but nearly beaten down by the day-before-the-official-onset of spring's snowstorm (which I've referred to earlier in this entry) as you may surmise from the image below, an image that was included in a prior post here on Blogger. 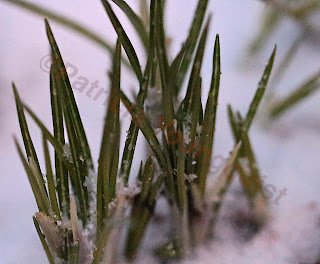 I have crocuses in three places in my garden; there are a few who blossomed in the container which "houses" my contorted hazel nut, where they are greeted by mourning doves as see below.

However, a number of them bloomed in the container that "houses" smoke bush, where a dark-eyed junco has visited them (as mentioned on TLLG's Facebook Page on 3-26-13).

The crocuses that are sharing the "home" of my kiwi vine did not bloom; perhaps this was due to the upheaval during renovation, which I've mentioned may be referred to by clicking here as well as here and here.

So there you have it, dear reader, the conclusion of part five and of this five part series, where the "things" I grow as well as my visiting birds and me have now all weighed in re the burning question: Is Spring of 2013 FINALLY, FINALLY springing?

AS OF 2018 FLORA AND FAUNA MENTIONED WITHIN THIS POST ARE FEATURED IN MY THREE VOLUME BOOK SERIES, WORDS IN OUR BEAK.