Is Spring of 2013 FINALLY, FINALLY springing? (PART FOUR of FIVE) ASK THE VINES! 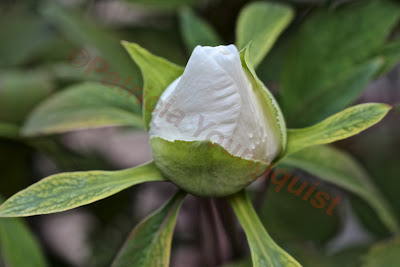 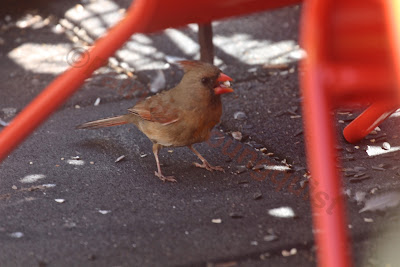 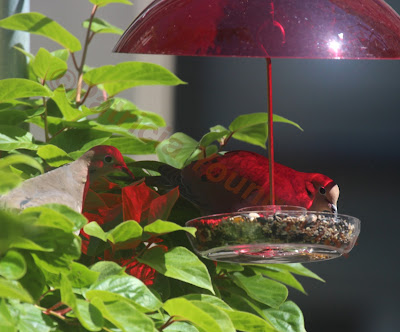 Happy May Day, dear reader, and, as you might recall, I've blogged about this "special holiday" of May Day here on Blogger in bygone years, including a post which you may refer to by clicking here.

And, with my opening salutation, I offer you a few "scenes" (posted above) from my garden on this first day of what Guinevere (from Camelot) called a "merry merry month."

There were a number of "scenes" on this bright May Day and the ones above show a bud from my Paeonia suffruiticosa (Tree Peony), which is about to give birth, my sweet Cam enjoying a spring snack, and two mourning doves soaking up the sun whilst nibbling from a feeder near my Actinida kolomikta and Actimida (Kiwi Vines), two vines that are scheduled to be featured in today's post: part four of my series (which I introduced this past Friday on Blogger) where the things I grow are assisting me in answering the question: Is Spring of 2013 FINALLY, FINLLY springing?

In this post, my kiwi vines as well as my other three vines will weigh in with me re their answers to this question.

We'll begin today's entry with the opinions of my kiwi vines, who are thriving, as indicated in the image posted below, an image which is an aerial view of my rooftop garden. 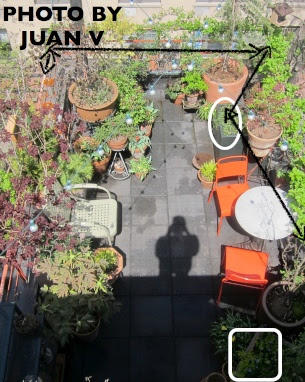 This picture was taken by Juan V (whose shadow can be seen in the photograph) when he was here a week ago today.

The white circle (to the top right) which I've superimposed over this photograph, indicates the "digs" (home/container) of my kiwi vines and the black arrows indicate the paths in which it's growing! I have had the kiwi vines for three or four years now and one of them, the Actinida kolomikta, holds the distinction of having been in my first garden-themed Virtual Story (mini-movie), The Kiwi Speaks! Fifteen Minutes of Fame . . . almost, which he narrated, and is available for viewing in my Vimeo Library by clicking here.

However, at the time of the "movie shoot," my kiwi vines did not live in the digs seen here; they only "moved" (were transplanted) into their new home last May! This is significant to report in answering the question posed by today's blog post because often when "things" are transplanted, they go through a period of adjustment, and not only were the kiwi vines transplanted a little under one year ago, but in September of 2012, four months after my kiwis had been transplanted, both vines had to be uprooted and put in a "body bag" which was then tied to my terrace's railing.

This upheaval had to be done to accommodate a so-called renovation to my roof extension garden, and if you'd like to read about it you may do so by clicking here as well as here and here.

Given that my kiwi vines "suffered" these two disruptions to their 2012 lives, it is amazing how well they are faring (as you can surmise from Juan V's aerial image and from my photographs of details of its 2013 spring buds which are posted below). 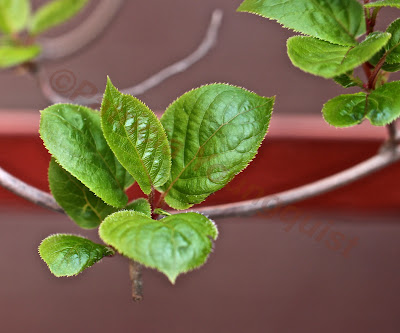 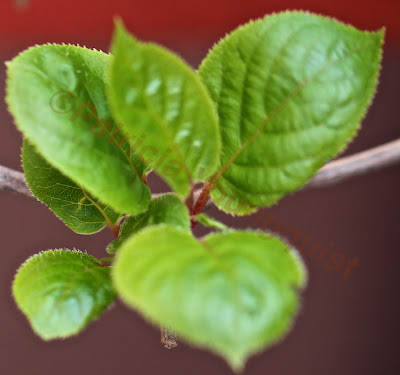 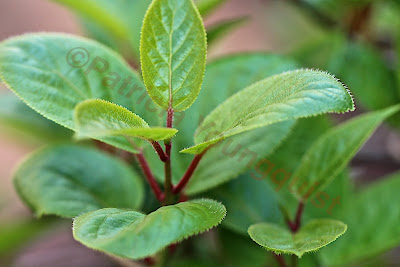 The latter of these three photographs should give you a sense of the kiwi vines' awesome burgundy stems that support their lush foliage. And I am not the only one who appreciates my kiwi vines, my visiting birds admire them also as you can surmise from the pictures below. 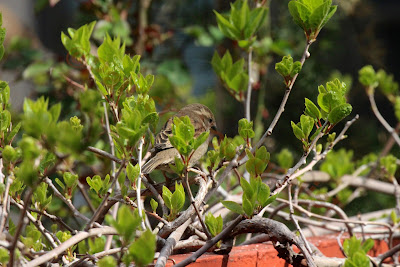 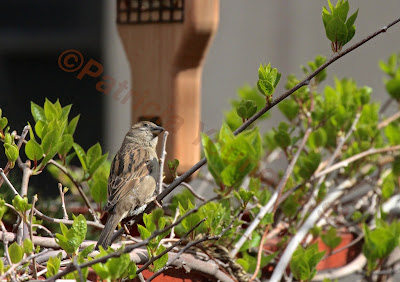 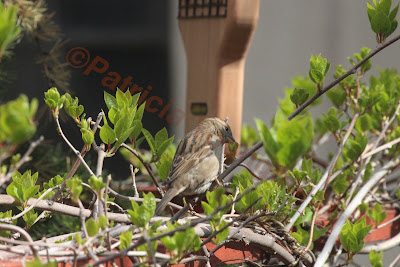 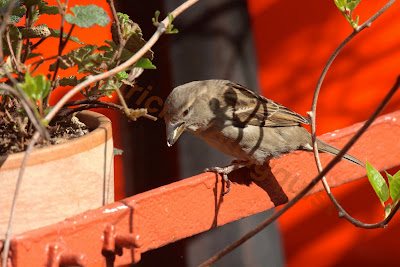 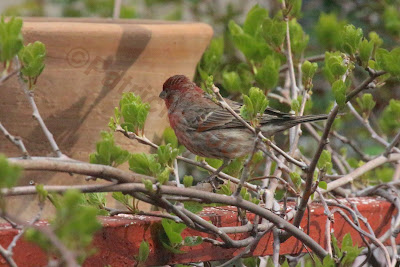 The kiwi currently shares his home with Crocuses and Ajuga which are two "things" that will offer their opinions in part five of this series.

Meanwhile, another one of my vines, my Autumn Clematis, had a similar situation to the kiwi vines. The autumn clematis's location in my garden is indicated by the "rounded" square in the lower-right hand corner of Juan V's aerial image.

Like the kiwi vines, the autumn clematis shares its "home" with "others," namely the muscari family (who were discussed in part three of this series) and the creeping jenny plants (which will voice their opinions in part five) as seen in the following pictures. 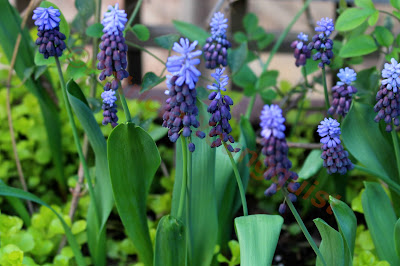 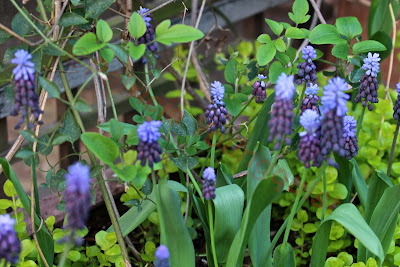 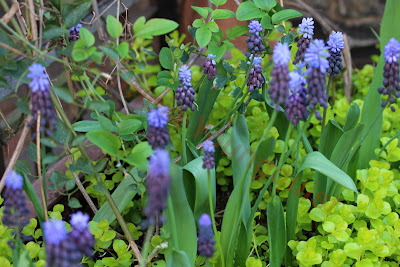 The muscari and creeping jenny are so lush that it may be difficult to distinguish the autumn clematis; but the "sticks" you see in the images are its branches, and its foliage is climbing up trivets on a wall directly to the right of it. If you follow TLLG's cyber venues, you may recall that a few years ago, Juan V created an installation with trivets so that the autumn clematis would have a place to climb, which it is doing at the present time as evidenced in the pictures below. 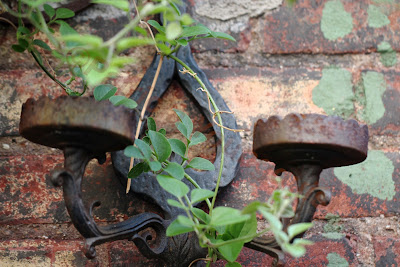 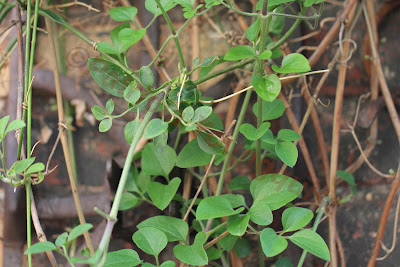 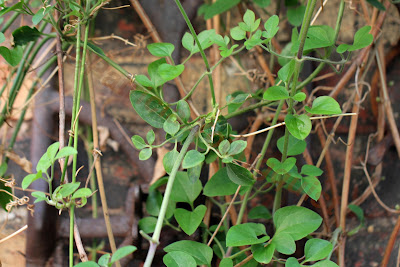 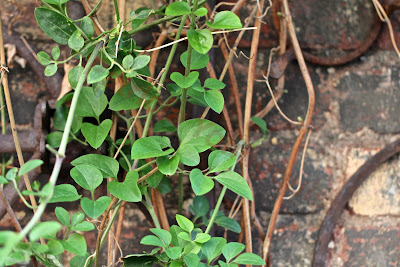 The fact that the kiwi vines as well as my autumn clematis both appeared in my first garden-themed movie and that they both share their "homes" with others is not the only thing which they have in common.

As I've stated, this upheaval had to be done to accommodate a so-called renovation to my roof extension garden, and, once again, if you'd like to read about it you may do so by clicking here as well as here and here.

Unlike the kiwi vines, the autumn clematis has not had a bird alight upon it, however, it does have "bragging rights" as it was once visited by a dragon fly! The dragonfly loved the little white flowers this vine produces in the autumn and from the way the clematis looks now, it looks as if it will certainly produce them again; and hopefully be visited by more dragonflies.

My other vine that survived the "renovation" upheaval in my garden is my H.F. Young Clematis. During renovation-prep, the H.F. was also uprooted and put in a "body bag" which was tied to my terrace's railing. The H.F. can not be seen in Juan V's aerial photo, but to give you perspective, I will tell you it is located behind Juan V's copy-right at the upper-left hand corner of his image which "indicates" the northwest corner of my terrace.

Moreover, unlike the kiwi vines and the autumn clematis, the H.F. did not need to be transplanted last year even though I've had this vine longer than anything else I grow in my garden, as you might surmise from the size of its root-ball
(seen below) before it was put in the body bag! 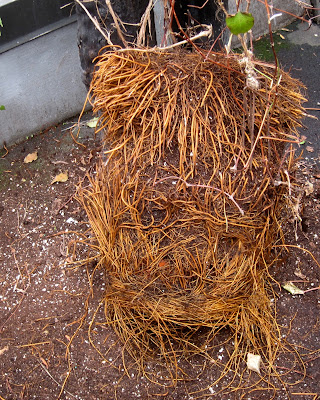 The image is one you may recognize, as it appeared in my posts about my so-called renovation; however, if you'd like to refer to those entries, you may do so by clicking here as well as here and here.

In any event, if I hadn't told you about the H.F. being uprooted, you might not have suspected anything about its enduring a disruption to its life, for it looks terrific at this time and is sporting many buds that will soon burst into flowers, as seen in the pictures below. 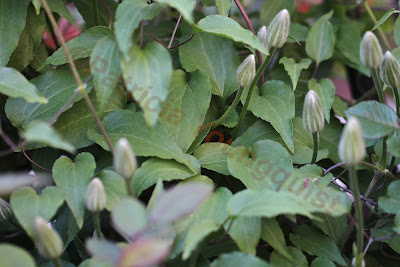 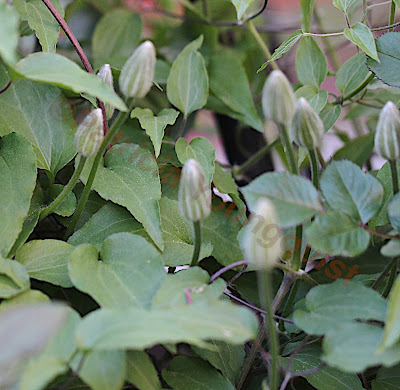 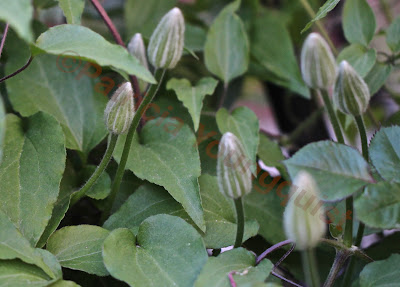 In addition to my kiwi vines, autumn clematis and H.F. clematis, two other vines grow in my garden: the Vaccinium macrocarpon (AKA Cranberry Vine) and the Rubuis calycinoides (AKA Creeping Raspberry). Snippets of both of their foliage (in images taken thus evening) can be seen in the images below respectively. 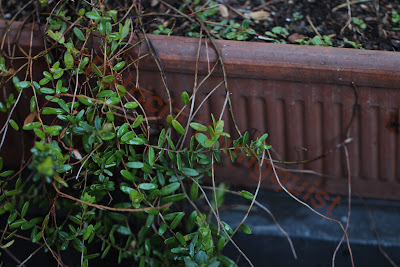 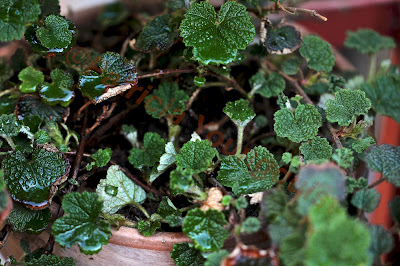 Both of these vines are opting out of weighing in with their thoughts at this time, as neither of them went through transplant issues in 2012 and neither of them experienced too much disruption to their routine during my "so-called" renovation, I mean they weren't put in body bags!

However, both of these vines do provide solace for my visiting birds as seen in the images below. 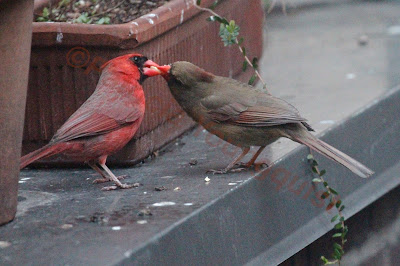 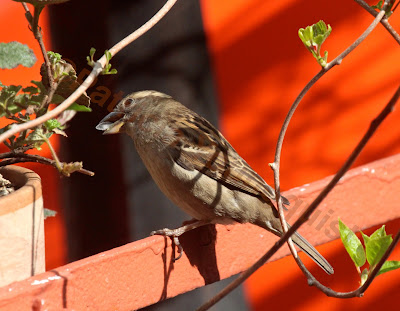 The cranberry vine provided a "hiding place" for Cam and her beau and the creeping raspberry provides inspiration for the house sparrow!

So there you have it, dear reader, the conclusion of part four of this five part post and the vines have now weighed in with me re the burning question: Is Spring of 2013 FINALLY, FINALLY springing?


In part five of this series, you'll hear from my ornamental grasses, plants and  a couple more flowers, but meanwhile, how about you, dear reader; do you think spring has sprung?