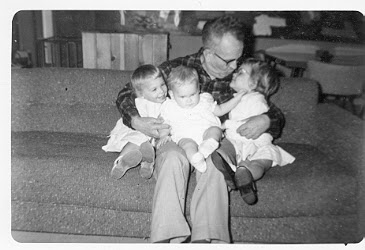 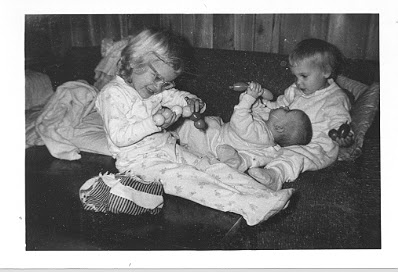 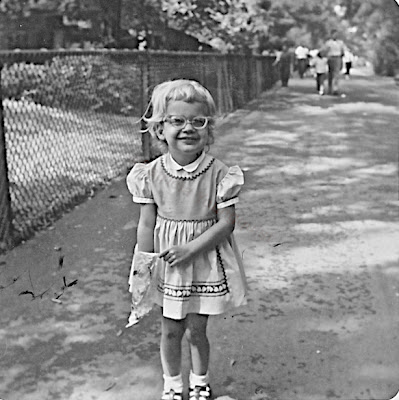 The photographs atop today's entry may be faded, but most of my memories associated with it are not. I believe that all of these images were taken by my mother, for she was the one who attempted to "document" our family life pictorially when I was growing up.

In pre-adolscent years (which were much later than the years when these photos were taken) I found the constant picture taking to be annoying, and I felt as if more attention was being given to setting up images than living in the moment in which a given picture was being taken: a sentiment that I've already expressed within this blog (in a 2010 post called Thoughts on the Creators of Photo-Albums, which you may refer to by clicking here). And if it's true that the setting up of "photographic scenes" was more "standard" than experiencing them, it's no wonder, for those were very painful years in our family as my father had left us to be with his secretary. As I've said (in other entires here on Blogger) before, perhaps, behind the lens, my mother was protecting herself from the sadness she must've felt.

However, in the pictures above today's entry our family was still intact. The first one is of my maternal grandfather holding my sisters and me and has been included in a previous entry here on Blogger, the second one is an image of us girls which was also featured in a prior post, and in the third image, I am featured preparing to feed birds, which may have been when my appreciation for the array of birds (who now visit the garden) began.

And while I usually write about my garden and the birds that visit it, the fact that I may or may not have acquired my appreciation for birds at a young age is not the "thesis" for today's entry; rather the focus will be on the wearing of eyeglasses, which you can see I am doing in all three photographs.


As many of you know, I am legally blind, which is a fact that I wrote about during one of the the initial posts of this blog (in 2010), when I described the impact that my condition has had on my work as a visual artist, where I also included a narrative on the wearing of glasses and stated:

"My mother was a movie buff, and often told me that she had spent most of her high-school days at the cinema. I can still remember being told that the year before I was born, one of her favorite movies was
How to Marry a Millionaire.

This movie was a wide success, partly due to the character of the protagonist, Pola (played by Marilyn Monroe), and her attitude towards wearing glasses - preferring to walk into walls rather than risk a man seeing her wear them - and who was convinced that the author, Dorothy Parker, was right by saying, 'men seldom make passes at girls who wear glasses.'


"The times, of course, have changed, and so have attitudes (to some extent) about wearing glasses. Some people even wear glasses - with no correction in them - to achieve a certain look. Obviously, had I been born at a different time, during a different mind-set, or if my folk's consciousness was raised when it came to low vision issues, my perception might have been totally different. The background I am giving here is to set the tone for what it was like to grow up at the time I did, and how that shaped my artistic endeavors.

"A few months before my fifth birthday, and the onset of kindergarten, my mother suggested that I start a hope chest, and began filling it with dishes that I might need if I was 'fortunate enough to have someone to marry.' My mother (who did not wear glasses) was already worried that I would not have a boyfriend since I wore thick glasses. Perhaps this is because when she was growing up, she was surrounded by many aunts who were single (although they did not wear glasses), and who were labeled 'old maids' - even though they longed to be married.

"When I first went to kindergarden, I was not thinking of dishes that I might need to start a household. My perspective of having low vision was this: "I have worn very thick glasses with pointed pink frames since I was three. Once when I stayed overnight at a cousin's house, I wore them to bed - thinking if I had to get up at night to pee, I would surely need to find my way to the bathroom. When my cousin discovered this, she told everyone that I even needed glasses to see my dreams. That’s when the neighborhood kids started calling me 'Four Eyes' and 'Little Miss Coke-Bottles,' and saying I was 'blind as a bat.' I cannot tell Daddy this, because he wears thick glasses too, and I don’t want to hurt his feelings. Mom, who doesn't wear glasses, says I can take them off if I want people to like me. But I can’t do this, since without them I see very little - and what I do see is fuzzy. If I say I wish I could be like my sister and not wear glasses, she calls me a green-eyed monster. I do have green eyes so I suppose she is right."

Whilst I write today's blog post (and include observations from a former — but related — entry here on Blogger), my eyesight is on my mind. This is because I will be meeting with an eye surgeon tomorrow for medical tests to determine if I should have a corneal graft in my left eye, an eye where I have had almost no vision since I was a toddler! As I prepare for the appointment, it seems odd to believe that having low vision and wearing glasses pained me so much!

Looking at the snap-shots above, taken before the aforementioned kindergarten days, you'd never suspect that wearing glasses made me feel unhappy! In retrospect, perhaps it never did; after all, in some ways eyeglasses were, and have been, my best friend, allowing me to see when I otherwise could not.

It is hard to distinguish if I felt bad about wearing glasses or bad about how it seemed to shape what others thought of me, which, unfortunately has often mattered far too much to me.

Whatever the case may be, I feel the details surrounding attitudes towards eyeglasses, which I initially discussed in my aforementioned 2010 Blogger posting, are worthy of repeating, as a way to inform others with a visual challenge —  who may have had similar experiences — that I've recently procured some eyeglass frames which would have caused even Dorothy Parker to change her attitude on glasses! And these frames can accommodate the prescription of those with low vision!

The eyeglasses frames are designed by Linda Derector, who now sells them at The Sight Improvement Center, in New York City. It is a place I've gone to since January of 2001, and it is a place that fulfills its mission, which is "to provide optimum vision care in an efficient, cheerful and caring environment. We always strive for and maintain the highest level of satisfaction of care and services to our patients. Our values at Sight Improvement Center is to treat each other, and our patients, with dignity and respect. We always strive for self-improvement, maintaining a friendly cheerful environment which nurtures the sharing of ideas"

Ms. Derector is fairly new to the center and I first met her after an eye exam in August of 2012, where I received some disturbing news regarding my eyesight; and, so the second portion of this entry is related to the following image (that was taken by one of my computer instructors and shows one of the pairs of my eye-glasses that are designed by Linda Derector). 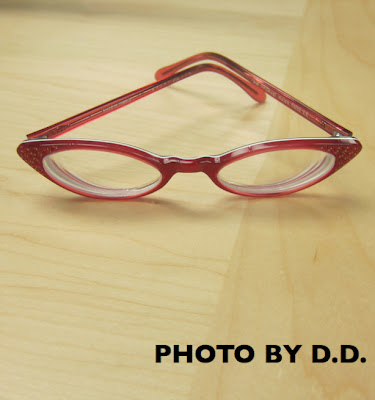 The picture appeared in a prior post — in August of 2012 — here on TLLG's Blogger pages) and my narrative in that entry included the following:

"Because I don't sleep with my glasses on — even though I'd probably be able to somewhat see my dreams (wink) — I wake up with a very Monet-like view of my surroundings. My entire world, without glasses, is impressionistic, and even with them, only one of my eyes minimally functions, SO, whatever I am able to see, I am grateful for, however, this means I might not realize when my vision is changing, as I seem to think that whatever I can see is what my eye is capable of and would not necessarily detect a change.

"Moreover, my left eye turns completely inward. I don't notice it as that is the eye which can only detect color and not much else; while my right eye, with its limited ability does all the work. However, I don't notice the left eye turning inward, but others most certainly do; and once a casting agent said to me, "Does it bother you that your eye turns inward? When I was in high-school I used to make fun of someone whose eye did what yours is doing!" And recently a  woman gave me an unsolicited "opinion" and said to me, "With your eye turning in, you look like a dog going blind!"

"It was my relating the aforementioned comments to my optometrist that caused him to say that I could have surgery on my left eye performed by my opthamologist, and that the procedure would involve no risk, since I 'basically have no vision in that eye.'

"All surgery is risky, I feel, and because there is no surgical procedure to remove the hurtful comments before they come out of the mouths of folks with insensitive communicating skills, I decided to just get a new pair of glasses to meet my changing visual needs. The optician that I have seen for over twelve years was not in that day and I was referred to her colleague, and she and I decided together, that in lieu of surgery, I should get a fantastic frame even if in doing so, attention might be drawn to my left eye turning inward."

But now, not even a year later than that entry was made, it seems as if living with legal blindness and "looking like a dog going blind," — even if my glasses do look fantastic — may be the least of my visual worries, as I have received confirmation re disturbing news (that my optometrist at Sight Improvement Center suspected) from my ophthalmologist (who is not part of The Sight Improvement Center but who I go to upon their recommendation).

The news is this: it seems I have the early stages of floaters and cataract in my eyes and, because of the severe loss of vision that I already have, undergoing surgery for a "normally not risky" procedure might indeed be too risky for me.

Be that as it may, my beloved Sight Improvement Center optometrist has suggested that I inquire with the ophthalmologist about the possibility of her doing a corneal graft, if she were to remove my now "dense" cataract, hence tomorrow's appointment.

Evidently the procedure, a procedure known to restore some lost eyesight, may not be viable for me because I may not have the neurological receptors to accept/interpret/accommodate any vision change.

At this moment, I am leaning towards not having the procedure, unless I get some unexpected or encouraging news tomorrow, and I'm doing it with the "help" of yet another fabulous pair of Ms. Derector's frames (seen below with her wonderful eye-wear "accessories"), 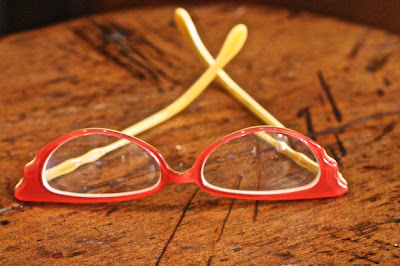 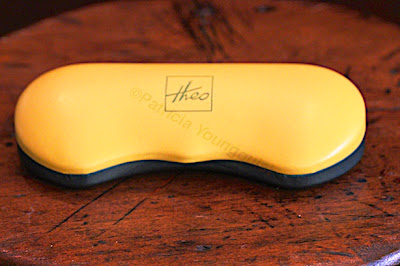 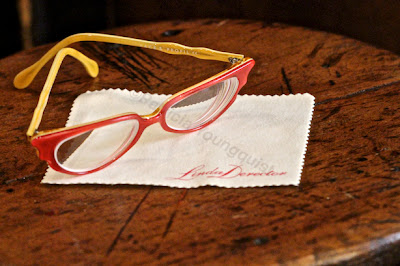 even though I'm (thankfully) past the stage in my life where I don't care what Dorothy Parker said about men, and passes, and girls who wear glasses!