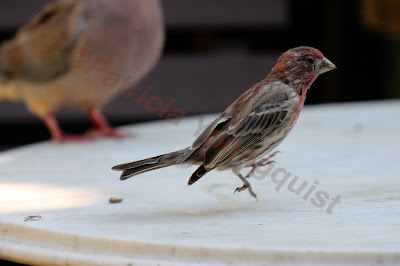 This is the last "official" weekend of shorter daylight hours! Next Sunday, March the tenth, those of us who are living in the majority of the states in the U.S.A. will set our clocks forward one hour; and from that period on, we will experience longer hours of daylight until November the third of 2013, at which time we will set our clocks back by an hour: in either case proving Kermit to be right for "time is fun when you are having flies."

Meanwhile, in nineteen days (counting this one) it will be the "official" beginning of spring for 2013; and so today I'm doing some pre-spring cleaning in my Aperture Library, where I came upon the image posted above today's blog entry.

When I initially took the photograph (in September of 2012), it seemed my sweet house finch was playing hopscotch atop the table in my garden, however, I described this finch's "antics" differently on TLLG's Facebook Page this morning indicating that I saw my "house finch (was) 'dancing in the streets' or rather dancing atop a the table in my garden! Upon my seeing this image I could almost hear my sweet finch singing:

'All we need is music, sweet music,
There'll be music everywhere,
There'll be swingin' swayin', and records playin,
Dancin' in the street

At which point I encoraged folks to "check out the Martha and Vandella's performance of their song" and to let me know if they thought "my sweet bird was dancing to this golden oldie!"


But I've digressed: spring is a season most gardeners look forward to, and, of course many others also look forward to it, such as baseball players. I'm not a follower of sports but I am a follower of quotes about seasons, and supposedly the ball-player, Roger Hornsby had this to say: "People ask me what I do in winter when there's no baseball. I'll tell you what I do. I stare out the window and wait for spring."

In bygone years, I've never stared out the window (of my door which leads to my terrace — roof extension — garden) wishing for spring; even though my garden looks much, much nicer during that season then it does at the supposed tail end of winter. I've always felt that the act of staring out the window, whilst yearning for another season to hurry up and arrive, would be a way of rushing my life to pass more quickly; and God knows I'm old enough as it is! My feeling towards the rushing of seasons is a sentiment I've expressed a number of times in my on-line venues, including a post here on Blogger.

However, having said this, my desire for the onset of spring feels urgent this year, not because my garden is looking disheveled as it continues to sleep, but because I miss some of my visiting birds as their appearances in my garden have been sparse throughout this winter, a winter that has been freezing cold and gloomy-grey, without the beauty of snow; except for the 10.5 inches of snow that came all at once; during Nemo, a nor'easter (which occurred this past February), and caused my Chelsea Larch to topple over, destroying its unique shape! The event was "announced" on TLLG's Facebook Page, but for those of you "who don't do Facebook," I've posted a photograph below. 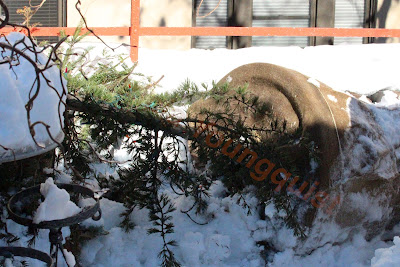 In any event, a few birds did visit during that storm which helped ease the pain of my seeing my "Chelsea Larch" lose its unique shape to Nemo, especially since it had survived a snow storm (although not a nor'easter) in December of 2010! BTW, the aforementioned birds who came during Nemo can be seen in the following photo-ops. 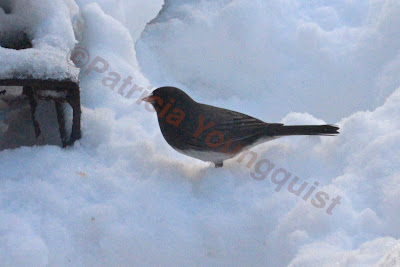 The image above as well as the one directly below, 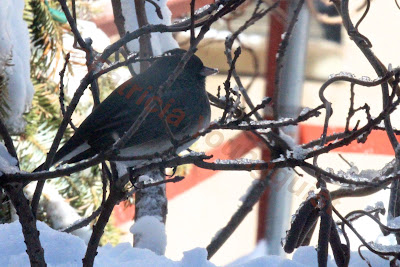 features a bird who has yet to be positively identified because I've received conflicting information as to it being a tree swallow; or a snowbird or junco.

Moreover, there seem to be two varieties of this "mystery bird," one is a navy blue (as seen in the images above), the other is grey as seen below. 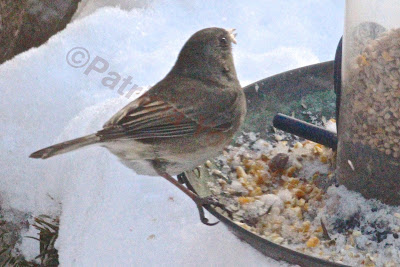 However, I've heard that a bird's coloring may appear differently depending on lighting (but it seems to me this is two different colors of the same type of bird within the same family, and again, if anyone out there in cyber-land can help me clear up this mystery, please let me know within the comments *** field below this entry.)

A number of mourning doves also visited my garden during Nemo, and they seemed to thoroughly enjoy the snow, as you might surmise from the images posted below. 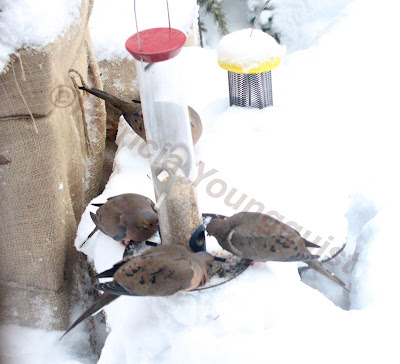 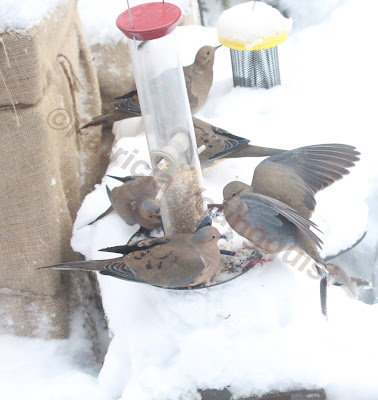 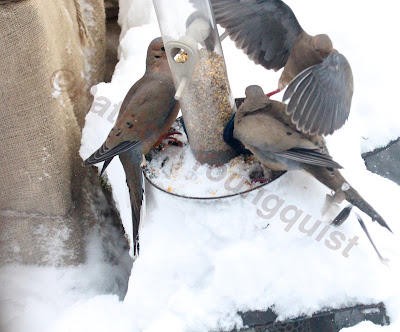 Different photo-ops of the mourning doves' antics during Nemo were featured in postings on TLLG's Facebook Page; my Pinterest Boards; as well as in earlier posting here on Blogger.

During Nemo I did not see Cam (my lone but wonderful female cardinal, who as many of you know, has been featured many times in my cyber-venues)! And I have only seen her once for a brief moment (seconds) since Nemo occurred (which was three weeks ago)!

Even though the snow has been gone ever since the day of that storm, I've not seen Cam; or her beau; nor my feisty tufted titmouses; nor my sweet male and female house finches; nor my white breasted sparrows; nor the "neon-looking" common grackle; nor the chickadees; nor the hairy "loner" woodpecker; and as a result, I'm behaving a bit like Roger Hornsby, staring out the window awaiting spring, a time, I hope that the rest of my feathered friends will return!

It's bleak out there today — a dirty grey coloring taking over the garden —where, even a mourning dove seems to be saying a prayer atop a container (which "houses" a tree of mine that has been wrapped for the winter season), for the expedient coming of spring! This is evidenced by the photo-op below (taken through my window as it's too cold for the door to be open). 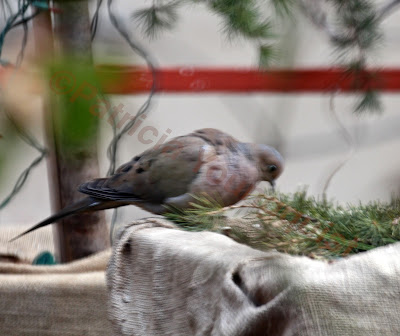 Even some of the other mourning doves comrades (seen below), 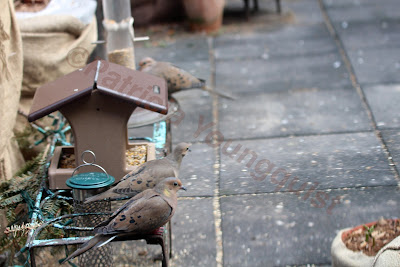 seem to be awaiting a brighter time as they position themselves like those who waited for Godot!

And even though they take an occasional nibble, 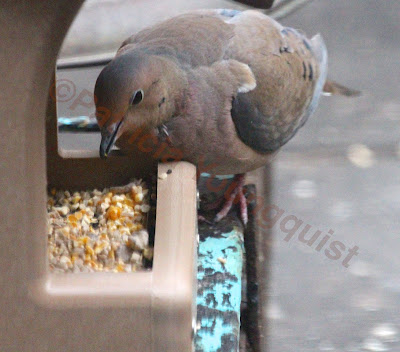 "smiling," as they always do when they nosh, I'm thinking that they miss the other birds who have taken a hiatus from here!

In any event, I do think the mourning doves miss the "entourage," for they always have a good time when they are together, as you might surmise from the images below showing them in a couple of situations in bygone months in my garden.


Perhaps since I miss my birds I am projecting on to the mourning doves but it's interesting to consider that birds which do not leave for the seasons might miss their friends — unless they tweet each other on the interim!
Posted by The Last Leaf Gardener