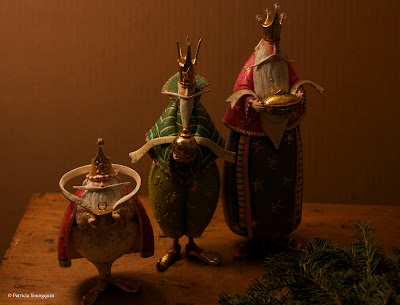 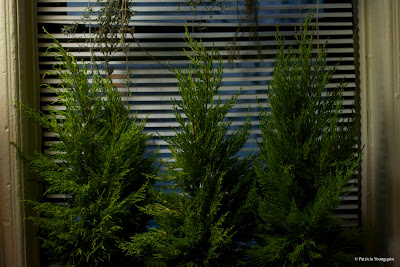 Today is the first Friday of the New Year, which means it is a day the things (80+) which I grow in my urban (NYC) terrace garden, and I, "earmarked" for part of the 2011 year-end-review. As you may recall, this will occur over a number of Friday Follow-Up posts in January, and these posts will cover the brief "highlights" of the "activities" that occurred in my garden last year. What the things which I grow in my garden, and I, did not realize — when we agreed on today's date to begin our review — was that today is also the Feast of the Three Kings. This is an "event" that I wrote about last year on TLLG in a post that you may refer to by clicking here.

However, because I wrote about The Three Kings on TLLG last year (where I included an image similar to the one at the top of today's blog entry), and because I have recently shared information about celebrations regarding this feast day on both nybg's (New York Botanical Gardens) tumblr as well as TLLG's Facebook Page, we have concluded that the Three Kings would not mind sharing the limelight today in regard to the scheduled year-end review.

Be that as it may, the question raised by my Lemon-Lime Cypress triplets — who, given their name, know a thing or two about limelight — and who can be seen in the second image above today's blog entry (more on this later***), was this: while the Three Kings might not mind sharing the limelight with the things that I grow, would the things that I grow be willing to share the limelight with the Three Kings? In particular would my Physocarpus opulifolius (Coppertina) have problems doing this?
As you may recall from a very recent blog entry, my Lemon-Lime Cypress triplets only arrived in my garden this past December 16th, but eleven days later they had to be moved inside my apartment, but, apparently, not before they had heard (from the other things which I grow here) about my Physocarpus opulifolius's need to be in the limelight, and of the importance of him not being disappointed (over a postponed opportunity) again.

And, as you most likely remember, my Physocarpus opulifolius (Coppertina) was quite taken aback when he felt that the attention in my garden was not focused enough on him. He made his feelings quite known in a post that he authored this past Cinco de Mayo, soon after he received his new digs (as seen in an image associated with his post and featured below for your convenience). 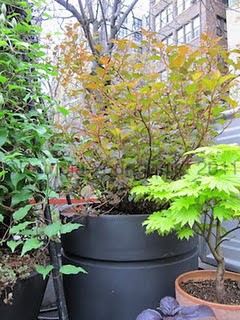 I can understand my Physocarpus opulifolius's frustration over getting his hopes up when he heard that he was about to be featured — only to have them postponed — as I have had many let downs when it comes to job opportunities.

Moreover, even though he enjoyed having the post he authored published on TLLG, my Physocarpus opulifolius has had a few other disappointments, as he passed his spring, summer and fall days in my urban garden this past year.

For example, he was very excited, in late May, when a visiting Monarch Butterfly landed on one of his flowers, as seen in the image below that was featured on TLLG. 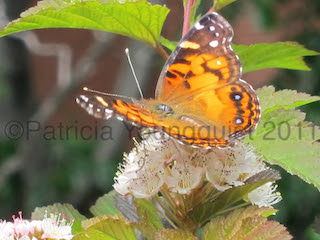 And he was even more excited when I made a mini-movie (virtual story) of  this event, then featured it in my Vimeo Library, because he thought he'd be a film star (and I overheard him rehearse an Academy Award acceptance speech).

But, alas, I have not used the movie yet (because I plan to incorporate it into a larger project), and this meant that my Physocarpus opulifolius had to delay his gratification. He was OK with this for a period of time, because I featured the aforementioned image of his flower with the butterfly atop it, as my Gravatar, and as my "About" photo on both this blog, nybg's tumblr, as well as on my Vimeo Channel.

Then, as you may recall, this past November, when I bit the social-media bullet, it was suggested that I use the image of just the flower of my Physocarpus opulifolius, and not include the butterfly (which I did by using the image posted below, and, if you have been following TLLG you will surely recognize).

While my Physocarpus opulifolius was elated that the Monarch Butterfly chose his flower for a landing spot, he was even more elated to be featured without the butterfly in all of my social-media "about pictures," and he "guest blogged" for TLLG again, telling his story.

Unfortunately, my Physocarpus opulifolius would ultimately become disappointed when my logo was changed once again (see below), to what it continues to be, because it reflects more of my brand.

Hopefully, my Physocarpus opulifolius has come to terms with this, and knows how much he is loved. In any event, there is nothing wrong with his appetite! The "pricey" digs which he received this past May are already too small for him, and they will need to be replaced next season!

As for my Lemon-Lime triplets, they are making an adjustment for the winter season. They had only been here for eleven days, enjoying their digs, where their containers "rested" within my "fireplace-fixture-planter", which meant that they were living between my Physocarpus opulifolius and my Japanese Larch AKA Larix Kaempferi, who are off-camera in the picture below, which is an image that you may recognize from my posting a few days ago, 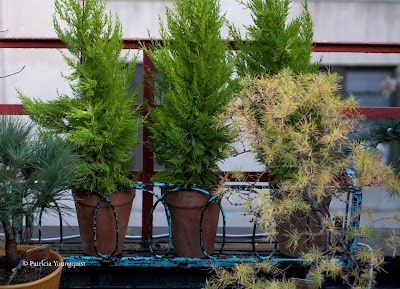 when they had to be moved inside my apartment (as you can see from the second image *** at the top of today's blog entry), as they are the only things that I grow in my garden that will not winter over, no matter which one of my winterizing methods (discussed on Fern Richardson's blog) that I use!

In any event, during their brief stay outside in my garden, my Lemon-Lime triplets became acquainted with my Physocarpus opulifolius because his home is to the left of this "planter", which used to be the home for my Hysopp Triplets. 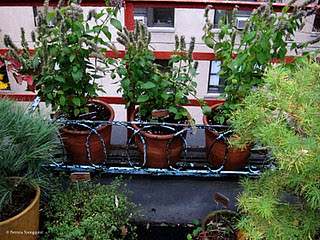 My Hysopp triplets provided a lot of entetainment for my Physocarpus opulifolius this past summer, because they were visited quite frequently by bees, an event that caused a lot of "buzz" in general, within my garden, which was discussed in a quite a number of posts on TLLG.

Now, hearing all of the stories of the 2011 growing season from the things in my garden, my Lemon-Lime triplets are of the opinion that between the bees leaving (due to cold weather) and the Hysopp Triplets turning in for their winter seasons's nap, these things might result in my Physocarpus opulifolius being down in the dumps.

This is most likely the case, especially since the Lemon-Lime triplets have had to come inside, leaving a void between my Physocarpus opulifolius and my  Japanese Larch (Larix Kaempferi) as seen in the following image, an image familar to TLLG folowers. 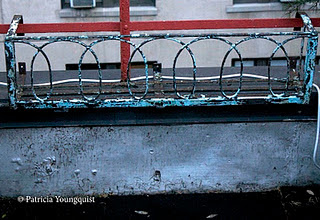 I tried to fill the void by putting containers filled with chard as a sign of hope that things will be planted again as seen in the following image, another image familar to TLLG folowers. 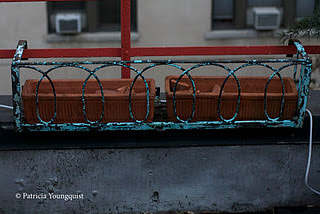 But it seems my Physocarpus opulifolius is still a little bit depressed with the winter blues, and he doesn't get a lot of conversation out of my Larix Kaempferi, who often sends his time watching television through the windows of the high-rise building which he faces. This whole scenario is seen in the image below  (taken by Juan V yesterday), which yours truly has turned into a quasi-diagram. 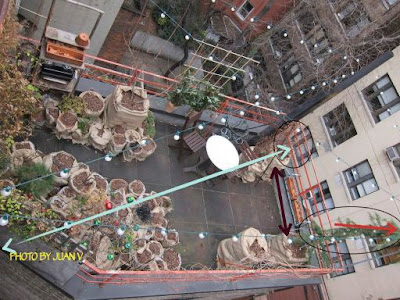 The space between the two of them is empty now (as indicated by the purple arrow), however, in growing seasons, there are many things growing "between" them. A number of those things have been wrapped and moved closer to my building as you can see in the left hand portion of Juan's image. The red arrow shows how my Larix Kaempferi spends his time looking into the windows across the way, and from what I understand, this is how he gets his television fix.

However, my Physocarpus opulifolius, like yours truly, is not a television fan, and this gives him too much time to think, and too much thinking is what he does not need during the bleak months of winter: what's a gardener to do?

And because the Physocarpus opulifolius most certainly wants the Lemon-Lime to return and be beside him in the spring, he will surely focus on them and not himself, or the fact that he is still waiting to appear in more blog posts or garden movies, and any time you focus on others, offer them support, and even bring them gifts as the Three Kings did for the Christ child on this feast day many years ago, you are guided to thy perfect light. 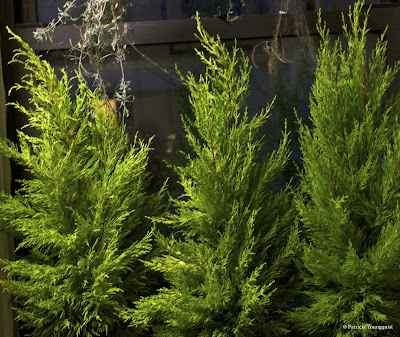 And as for my year-end reviews, well there's always next year . . .

Dear reader, I am pleased to announce that  my movie. "The Kiwi Speaks! Fifteen Minutes of  Fame . . . almost," is being considered for a larger project. SO, for now, I have had to "turn off" the function in VIMEO which allows anyone (except for my backers) to view it, BUT, I  will update you as to when my movie is back on the air for your viewing pleasure. I apologize for any inconvenience, TLLG
Posted by The Last Leaf Gardener