Star of Wonder, New York City Front Windows, and a Window of Opportunity for TLLG 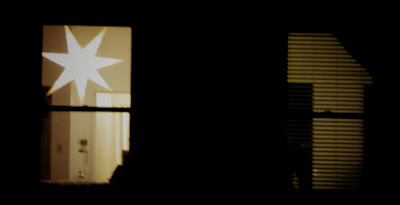 Tomorrow is the Feast of the Three Kings, a day, when the aforementioned lyrics to the hymn, We Three Kings are sung. In New York City, the feast will be honored by a number of celebrations throughout the boroughs including an annual parade in East Harlem. And, as I posted on TLLG's Facebook Page this morning, "This year will mark the 35h anniversary of this parade. The route begins at 106th Street and Madison Avenue, and it ends at 115 Street and Park Avenue. Although I've never been, I am aware that the parade features 12 feet Magi Puppets and live animals, such as camels and sheep.  I am not sharing the info as an endorsement but am doing so because I think it sounds like an interesting event."

As you undoubtedly know, dear reader, The Three Kings are always associated with the star of wonder, and, hence the presence of a star is a big part of holiday decor, or at least it is for the tenant who lives in the brownstone across the street from my building. The image of the star in a window, which is posted above today's blog entry, was taken on my camera by my neighbor's boyfriend on December the 30th 2010. He took the image for me when I told him that I had admired the star from the street.

Our apartments are on the top floor (fifth floor walk-up) of a brownstone in New York City. The window from their main living space faces the street and the brownstones directly south of us. I face north, with a "rear window" view which I described in yesterday's post.

Be that as it may, the aforementioned hymn comes to mind each time I see the star (which is quite frequently) because my good friend and who also often "serves" as my editor, Peggy Wood (PW); and is someone that I visit often, has a view of the star from her window too. This can be seen in the image below which also shows her "window sill" succulent garden. 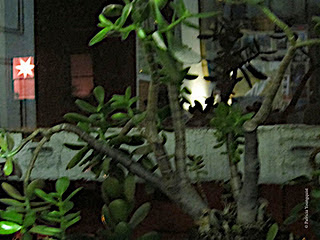 The image was taken by yours truly last week, but a very similar one was taken by me last year, and it was included in something I posted about the Epiphany (a holiday associated with The Three Kings), which you may refer to by clicking here.

This year, what I have to say about the window where the star hangs is quite different than last year because PW has shared some information with me of her experience seeing the star from her front (and only) window, and her "front window" news comes to my mind now. because, yesterday, in my post I described the plot of the movie Rear Window, saying, "Wiki's intro to the film's plot is this, "after breaking his leg during a dangerous assignment, professional photographer L.B. "Jeff' Jefferies (James Stewart) is confined in his Greenwich Village apartment, using a wheelchair as he recuperates. His rear window looks onto a small courtyard and several other apartments. During a summer heat wave, he passes the time by watching his neighbors, who keep their windows open to stay cool . . . "

Apparently, my friend PW, like "Jeff" in Rear Window, watches the comings and goings of her neighbors, not to the extent that "Jeff" did, as PW is most often reading as seen in the image below. 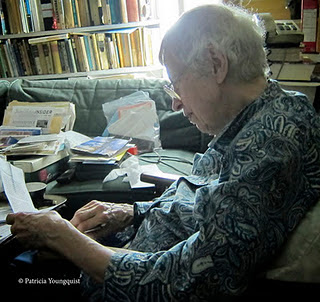 Evidently, for the past two New Year's eves, PW, has had an "interesting" experience regarding the "star of wonder", for it seems the tenant who puts up the star, throws quite the soirée for the new year, when all the guests take off their clothes for the duration of the party.

The aforementioned fireworks occur in conjunction with the Midnight Run every New Year's Eve. I usually attend the event in Central Park with friends as I described in a blog entry here on TLLG last year, so I know of nothing about the New Year's Eve comings and goings of the tenants who live in the apartment that has the window with the star, but I will say, it sounds like PW's succulents have a much more exciting view from her front window than mine have from my rear window!
Posted by The Last Leaf Gardener