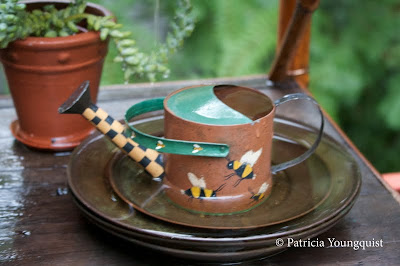 This past Sunday, August 20th 2011, as I prepared my blog entry for this Tuesday's publication, rain — severe rain — with thunderstorms was predicted. That weather report caused me to think back to the prior Sunday's (August 14th) torrents of rain.

While Texas remained under a severe drought, on Sunday, August 14th of 2011, the amount of rainfall in New York City set a record.

According to radio reports, newspapers, and countless Internet materials, including one found at this link, "New York's Kennedy Airport received 7.8" of rain, its soggiest day since records began in 1948. Its single-day rainfall output was about twice its average monthly total."  As a result of this immense rainfall, there were "scattered power outages and transit disruptions. Cars got caught in flash floods, and the Long Island Railroad reported localized flooding and trees on the tracks, delaying several dozen trains....in the subways, water flooded into the tunnels, knocking out seven lines of power . . . "

Besides the rhetoric, newspapers were, if you will excuse the pun, flooded with images of this occurrence, but the only photograph which I took of my terrace garden on that rain-filled day is one of a tiny watering can (obviously not one that I use to water my garden) that rests on the the second of three bamboo shelves which are attached to my terrace railing by copper-wire to provide me with an "urban hedge."

The EXIF info on this photograph tells me it was taken at 16:57:13; which, from my military time conversion, means I took it a little after 4:57 P.M. — most likely the only small window of time on that Sunday in which rainfall was not occurring, as I am not camera savvy enough to shoot pictures in the rain.)

The first  bamboo shelf of of these "urban hedge" can be seen in the photograph below. 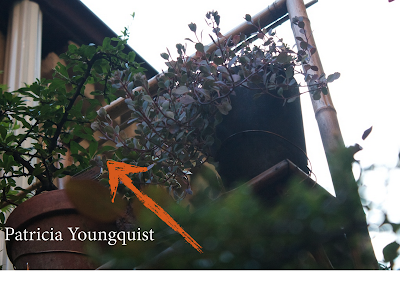 This photograph was not taken during the rainstorm, but has been included in this blog entry to give you an idea of what I mean by my "urban hedge" of bamboo shelving.

These shelves serve as one of my "urban hedges" — giving me privacy from voyeur neighbors as discussed in a few previous posts, including ones which you may refer to by clicking here and here. These particular bamboo shelves are located at the extreme southwest corner of my garden, which means they are to the immediate left of the door that leads from my apartment to my terrace garden, and therefore I did not have to venture very far into my garden to take either of the photographs of my bamboo shelving. An orange arrow has been added to the image directly above, to show you, dear reader, just how close the neighbor's window is to my urban garden.

However, the point of today's blog entry is not solely dedicated to "urban hedges" or to sensationalizing August 14th's rainfall, rather it is to shed light on the prevailing belief that the things which urban gardeners — or at least ones with container gardens — grow truly thrive as a result of such downpours. At times of heavy rainfall, many folks — as most of them know that I hand-water over sixty things that grow in my terrace garden — always say to me, "well at least you don't have to water . . . "

And with that assumption, I want to clarify something that I may have alluded to in a blog entry, in which I discussed hand-watering my terrace garden. First of all, rain does not always fall into the many containers that "house" the herbs, plants, flowers, vines, shrubs, and trees which I have in my terrace garden, so at times, even in heavy rainfall, I still have to water it.

Secondly, if the rainfall is heavy enough to do damage to subway systems, think what it can do to the root systems of things living in garden containers. A number of years ago it rained every day in the month of June, and a few of my shrubs that I had successfully wintered over, and that had thrived beautifully for part of that spring season, succumbed to mold and mildew brought on by their roots being unable to dry out. Since mold and mildew can spread, I had to get rid of the afflicted shrubs, and replace them with other things.

Hence, the type of rain New York City experienced on Sunday, August 14th, because it was followed by heavy rain on Monday the 15th, Wednesday the 17th, Thursday the 18th, had the potential of endangering some of the things which I grow in my terrace garden; but as you can see by the photograph posted below (which was taken by Juan V on Thursday the 18th), fortunately that was not the case. 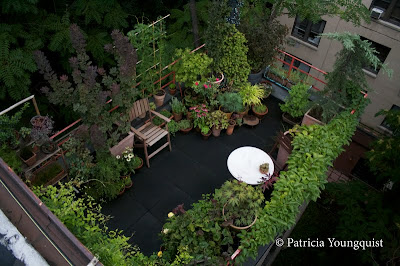 The things that grow in my terrace garden – so far — do not seem to be in danger of mold or mildew, which is a good sign, especially since it has continued to rain after Juan V took the photograph.

Unfortunately, another problem has come up in my urban terrace garden as a result of so much rainfall: Since the days following the time that Juan V took the aerial photograph of my urban garden, it has rained heavily again, and that rain, or rather my herbs, vines, flowers, plants, shrubs and tree's inability to dry out from that rain, has caused unsightly (in my humble opinion) mushrooms to make their home in the container which houses my Continus Coggygria (Smoke Bush) as seen in the photographs posted below. 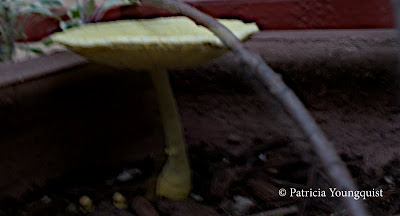 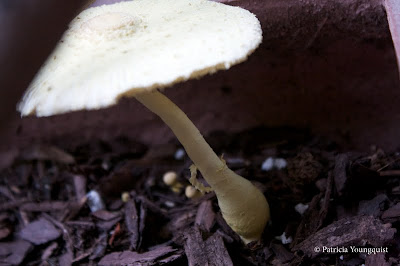 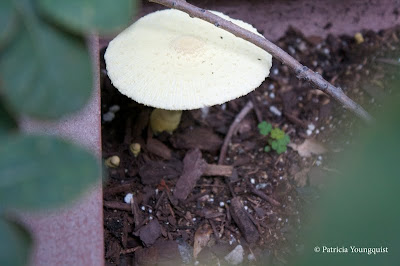 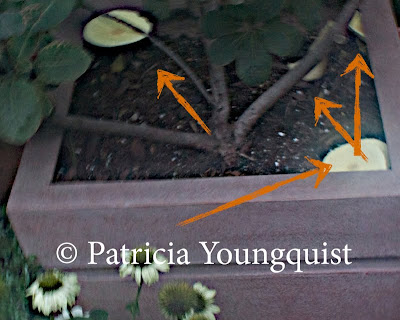 I use the term "humble opinion" in conjunction with my observation that mushroom are "unsightly" because when I saw them on Sunday morning, August 21st, their sudden appearance nearly gagged me; and it sent me straight to Google for answers, where I came upon a mushroom lover's web-site by someone named Michael Kuo which you may refer to by clicking here.

Before I go any further, I will confess that this is not the first time I saw a mushroom in my urban garden, I did see a "lone" mushroom "hidden" beneath the delicate foliage of my Thom-Thumb shrub, but I dug it out immediately —  out of a reflex reaction — rather than photographing it. A few days later, I spotted a mushroom growing in my Creeping Phlox, and this time, I took a photograph, (posted below), and then I pulled the mushroom out! 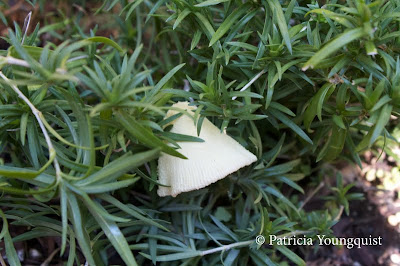 Unlike Mr. Kuo, I do not appreciate their presence, and upon reading what he has to say about getting rid of them, I am quite discouraged. Here is what Kuo has to say about removal of mushrooms:"Mushrooms are roughly comparable to apples on apple trees; they are the fruiting body the organism creates when it wants to reproduce. The apple tree's "plan" (I know; I'm giving human thoughts to trees and mushrooms, but it's the easiest way to talk about this) is to put its seeds in a nice, plump morsel that will fall to the ground and attract a hungry animal who will then, um, pass the seeds to new territory for germination and a new apple tree."

Mr. Kuo continues, "Mushrooms have similar plans. Their seeds (microscopic things called spores) cover parts of the mushrooms; one of the best ways to understand mushrooms is to think of them as 'spore factories'. The entire structure is an excuse to get spores out into the world . . . the 'real' organism – the part that corresponds to the apple tree, rather than the apple — is called a mycelium (pronounced so it rhymes with 'my helium'), and is found in the mushroom's substrate: the ground, leaves, a log, woodchips, and so on. It is a mesh of tiny threadlike cells that plow through the substrate, consuming nutrients . . . "

"Now it should be obvious why you can't get rid of your mushrooms; you would have to get rid of the mycelium rather than the mushrooms. If you have been picking or stomping on your mushrooms to make them disappear, you might as well have picked every apple in an orchard , trying to make the trees go away."

"HUH?," says yours truly to the blinking monitor.

"You would need to remove all the soil and natural debris in your yard or garden, and replace it with something inorganic like concrete or plastic — in which case you would 'probably' be mushroom free. I say 'probably' because Pisolithus tinctorius, Scleroderma, and other mushrooms might still erupt through your concrete."

And I thought bamboo shelving would shield me from unsightly things! The blinking monitor hears me wince!

"What I haven't mentioned yet is your mushroom is an integral part of your yard or garden's ecosystem. Its mycelium is probably doing one of two things, either which is crucial to the health of your yard."

But, I have a container garden!

"  . . . mushrooms are involved in a symbiotic relationship with plants and trees. The plant's rootlets are surrounded and protected by the mushroom's mycelium which help the plant absorb water and nutrients . . . "

Not convinced that their value is worth the eye-sore!


I will concede that I am willing to consider Mr. Kuo's view, because, after all, anyone who presents their argument by "giving human thoughts to trees and mushrooms" has a way of winning my heart, for as you know, if you follow this blog, there have been a number of occasions when one of my plants, flowers, shrubs or trees have expressed themselves by authoring blog entries. My Paeonia Suffruiticosa's (Tree Peony) self-expression is here, my Tulips "two-cents" can be found here and here; my Physocarpus opulifolius (Coppertina) views are here, my Roses weighed in here; while my Helichrysum bracteatum (Strawflowers), took the helm here.

And, not to be on done, my Hens and Chicks insisted on giving a thumbs up to a colleague of mine (which you can see at this link), while my Echinacea and Tropaelum majus (Nasturtium) insisted their placement in my Flickr Galleries be announced by them. They made their announcements in these respective links (here and here).

I am still not too pleased to have unsightly mushrooms invading my Continus Coggygria (Smokey Bush) and my Creeping Phlox, but if it doesn't bother them, I'll try to take the same attitude and let things take their course. Besides, once upon a time, I thought mushrooms were cute, well, at least ceramic ones, such as the variety yours truly is sitting on in the photograph posted below. The picture was taken on my fifth birthday, at Santa's Village, a place that was filled with amusement, and mushrooms (the purple double-sided  arrow on the photograph is pointing to two of the many) and now, as I celebrate my (ahem) birthday tomorrow, I will make a wish to be childlike and not childish about mushrooms. 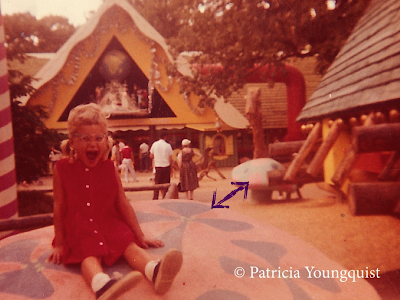