"Help one another is part of the religion of sisterhood." (Louisa May Alcott) 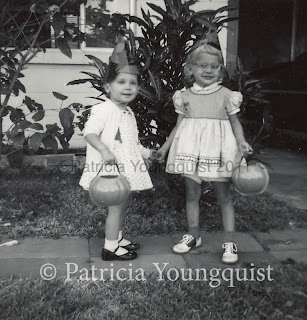 Back in the saddle leading to cyber-space, after a visit with my younger sister, who can be seen in the photograph posted above — to the left of yours truly — in a picture taken a few months after our younger sister was born. As you may recall, dear reader, in the last entry that I made to my blog, I referenced her visit, and while this blog is not about my comings and goings, the fact that her visit is where I left off, brings me to my starting point for today.

It is said that "sisters are different flowers from the same garden", and if you are familiar with this quote, dear reader, you might surmise (from knowing yours truly is a person who — among other things — maintains her urban terrace garden and dedicates a good portion of this blog to writing about gardening experiences) that I should run with this quote about sisterhood in this posting, and elaborate on it on my first day back to work. However, I am letting that quote run from this blog as I have some difficulty in citing quotes from unknown authors. Instead, I will focus part of today's entry on Louisa May Alcott's quote regarding sisters: "Help one another is part of the religion of sisterhood."
Alcott is most known for authoring the book, Little Women, a book based on her childhood experiences with her sisters. I confess that I've only read parts of the book and that I have never seen any movie or play that was based on Alcott's story, which concerns itself (for the most part) with the relationship of sisters.

I am the oldest of three sisters and we are "stair-step" sisters, which means the number of years between us, is about as minimal of "spacing" that was biologically possible for my mother. The middle sister (and the one that I've referred to in a few of my blog entries including one which you may find by clicking here) is the one who came to visit, and is also the one who adopted two children, James and Sophia (who are currently age seven and eight respectively), about six years ago. The fact that her children are adopted is not important in the sense that they are as much a part of our family as my other sister's biological children; and on some levels perhaps even more so.

One of the things that my sister mentioned during her visit with me was that my mother has been talking with Sophia about her own childhood experiences and focusing on the fact that she grew up under "F.H.B." ruling — F.H.B. meaning family hold back. My mother was raised during the Great Depression — a fact that is left out in her reminiscing to my niece — and, evidently, whenever my grandmother's (my mother's mother) siblings came to visit, my mother, and her siblings (when they were all children), were held to the code "F.H.B." at the dinner table, meaning that any food was shared with my grandmother's siblings).

"F.H.B., F.H.B.", my grandmother evidently repeated at the dinner table to remind my mother and her siblings to take less food portions so that there would be enough for my grandmother's siblings. If this is true, then apparently my grandmother was of the Alcott persuasion in her belief that "Help one another is part of the religion of sisterhood."

Seemingly, my mother was also supposedly told by her mother that if one dropped a dish cloth, this very act was an omen for company coming, and, evidently, my mother, because of the "F.H.B." policy at the dinner table, remembers becoming inconsolable one time when she dropped a dish cloth, because she did not like so many people congregating in the household. I was not surprised to hear of my mother recounting her sorrows to an eight year old child, as I served as my mother's confidante when I was a young child, after my father moved away, although the F.H.B. story is not something I recall.

It is sad for me to think that my mother felt overwhelmed and emotionally neglected as a child amongst my grandmother's siblings; but aside from my grandparents philosophy of share and share alike (again much like Alcott's belief that "Help one another is part of the religion of sisterhood"), my mother's childhood dinner table recollections in her accounting to my young niece may need a disclaimer.

My grandmother was one of eight children, and she can be seen standing in the third row (the person to the far right) with her siblings in a  photograph (that you may recognize from previous blog entries) which is posted below. 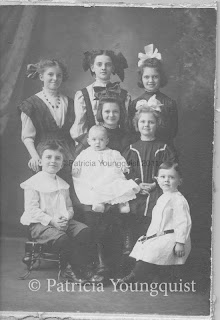 My grandmother, Clara Melahn, ne´e  Fitchie, is standing next to her sister, Grace Fitchie, a woman who influenced my fondness and appreciation for the "snail-mail" card, as indicated in a few of my former blog entries, including ones which you may refer to by clicking here and here.

The Fitchie children's mother died when my grandmother was eight years old, and at that time all the children were separated by being sent to live and work for other families, which is the fact that brings me to my need to provide a disclaimer to the "F.H.B. accounting picture" that my mother presents to my eight year old niece. Knowing this information about the early death of my grandmother's mother, and of its consequences to her, and to her siblings, makes my grandmother's need to share what she had with her siblings understandable.

More frightening to me, when it comes to thinking of my mother's being raised with any "F.H.B. rules", is the impact that resonated throughout her life as a result of another one of her childhood memories which she repeatedly recounted to me when I was a child, which was that, evidently while she was growing up, my mother, whenever she misbehaved, was told time and time again by her mother (my loving grandmother who claimed "not to have a jealous bone in her body")  "You may not always have your mother, my mother died when I was eight years old, you know . . . "

The things one recounts in a story told to another as they remember their past is interesting to me, as I find it says more about the person who remembers it than the event itself that I equate with a how-it-felt-to-me syndrome — a spin off on a concept laid out by Joan Didion in her essay, On Keeping a Notebook. (Ms. Didion's writings, as you may recall, dear reader, are ones I have referenced in former blog entries, including ones you may refer to by clicking here as well as here and here and here.)

In her essay, On Keeping a Notebook, Didion writes " 'That's simply not true', the members of my family frequently tell me when they come up against my memory of a shared event. 'The party was not for you, the spider was not a black widow, it wasn't that way at all' . . . "but I remained unconvinced that the distinction for my purposes, matters. The cracked crab that I recall having in Detroit in 1945 must certainly be embroidery, worked into the day's pattern to add verisimilitude; I was ten years old and would not have remembered the cracked crab. The day's events did not turn on cracked crab. And yet it is precisely that fictitious crab that makes me see the afternoon all over again, a home movie run all too often, the father bearing gifts, the child weeping, an exercise in family love and quilt. Or that it was to me. Similarly, perhaps it never did snow in August in Vermont; perhaps there never were flurries in the night wind, and maybe no one else felt the ground hardening and summer already dead even as we pretended to bask in it, but that was how it felt to me, and it might as well have snowed, could have snowed, did snow. How it felt to me: that is getting closer to the truth about (keeping) a notebook."

Yes, Didion is talking about "how it felt to be me" as the reason for her notebook keeping, and I am talking about the way one describes their past being motivated by how one felt it to be them. Perhaps my mother's siblings have a different spin on growing up under F.T. B. ruling. Her humorous sister, now homebound with cancer after years of enjoying a busy, wealthy life style but still maintaing her sense of humor, would say, "well, I'm overweight and certainly don't hold back on my food now . . . " and I think her other sibling might say, "my parent's generosity of spirit which began at the dinner table has been a big motivator for me to do works of charity."  There is no right or wrong on any of their spin on the recollection of their past, for how it felt to them and shaped their lives is important to them, as I suspect it is to everyone who relates the details of their past to anyone willing to listen.

As for how my sister who just visited views our past when it comes to our grandparents extending themselves to their siblings, she lives out their philosophy —  the one aligned with Alcott's "Help one another is part of the religion of sisterhood"  as she is always ready to help others. Having said that, I will refer to the quote I left behind, "sisters are different flowers from the same garden", because if we are different flowers in the same garden, I hope to come close to being able to be helpful to others as I saw my grandmother and as I see my sister doing.


And, with that thought, I'll be back to my "regular"  blog topics (which, as you know, dear reader, are usually garden related) in my next entry. In the interim, I will leave you with a photograph of how the garden looks now. 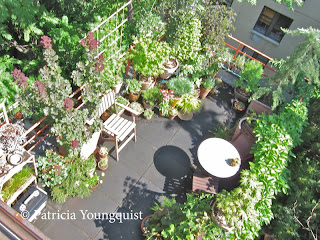