My "Shakespearean" Urban Terrace Garden Flowers: "They have their exits and their entrances . . . " 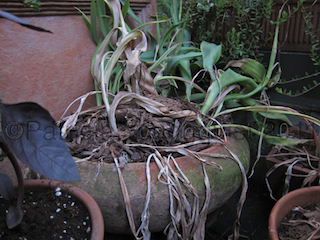 It's May 31st which means this "merry merry month" of May (as I referred to it just thirty days ago) is coming to a close, and so are my tulips,
pictured in the photograph (posted above), after having given myself as well as the herbs, plants, vines, trees and shrubs, that grow in my terrace garden nearly six weeks of enjoyment —  as indicated in several previous blog posts including a few that you, dear reader, might want to review by clicking here as well as here and here.

In any event, the photograph (at the top of this post), was taken yesterday, in the northeast corner of my garden, where Juan V and I thought the tulips might like to hide for a while —  until we decide on a good location within my terrace garden for them to rest until next season.

It has come to our attention that most folks like to cut back the leaves or the yellow stalks that appear once the tulip flowers are spent; however, yellow though they may be, it is truly necessary to let the stalks and leaves alone (or simply tie them up in a"ponytail"), in order for the tulips to get all the nutrients they need before they go to sleep until next April.

It is the same situation for my Paeonia suffruiticosa (Tree Peony), which enhanced my terrace garden with its beauty for about six weeks. (I've featured it in several blog entries that can be found by going to the Paeonia suffruiticosa Label on the lefthand side of this blog page.) Much like the tulips, it is also ready for a hiatus until next spring (as indicated by the yellowing pods the peony flowers have left behind, which can be seen in the photographs posted below). 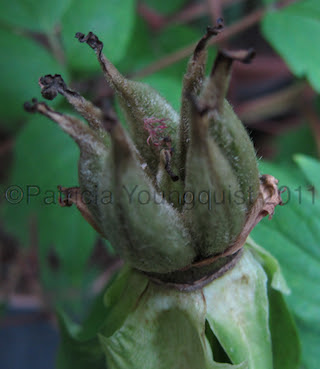 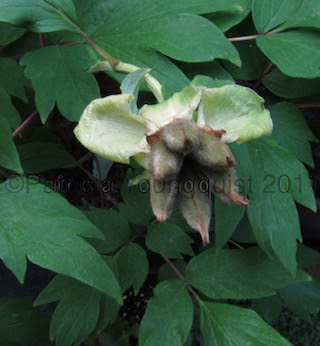 As I must do with the tulips, I need to leave the yellow and brown "remains" intact on my Paeonia suffruiticosa, so that it , too, can have its proper fill of nutrients before it goes to sleep until next spring. I can't say I blame any of them for wanting to take a long nap after all their thriving, and it now seems like an ideal time for them to do so, what with the summer heat that is sure to be on its way —  if yesterday's and today's hot temperatures are any indication of things to come.

However, my garden seems content at this moment, as evidenced by the "aerial" photograph (seen below) take by Juan V yesterday after giving many of the herbs, plants, vines, trees, and shrubs a haircut. 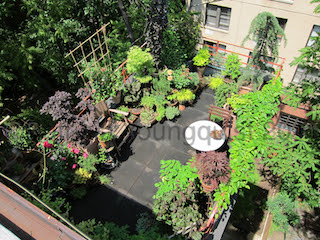 This aerial view shows off the lattice that Juan V built for me, using my bamboo sticks, as discussed in my post, Love Thy Neighbor — But Don't Pull Down Your Hedge, which you can refer to by clicking here. At this time, my Honeysuckle, is being "trained" to grow on this lattice, and it is just beginning to show signs of liking its new home as evidenced in the following photographs that feature part of the west side of my urban terrace garden. 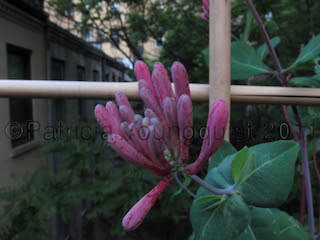 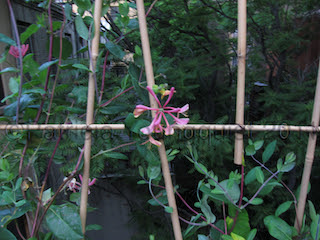 I look forward to the Honeysucle flourishing, not only because of its magnificent flowers but because the owner of the building (whose white aluminum siding can be seen in the background of the photograph posted below), that is two doors west of me, has illegally converted it from an apartment building to a Bed & Breakfast, and the "guest's" main attraction seems to be pulling up their chairs amidst their laundry drying on their railing (also seen in the photograph below), and to stare at my urban garden. I'd I'd  like a bit of privacy up here, which I will have when my Honeysuckle builds its wall. 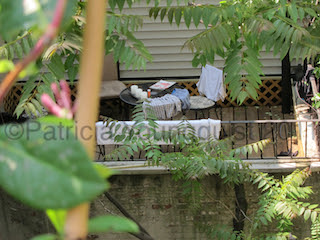 Meanwhile the things that grow in my garden are reminiscent of Shakespeare's As You Like It, in that my herbs, vines, flowers, plants, shrubs, and trees have their "exits and their entrances", as is the case with my tulips and peonies that are exiting for the time being, while the flowers from my honeysuckle vine make their entrance.

Additionally I have some trees that "play many parts" — such as my 'Tamukeyama', which decided to flaunt his red leaves today — leaves that compliment its already extraordinary burgundy foliage (seen in the photograph below). 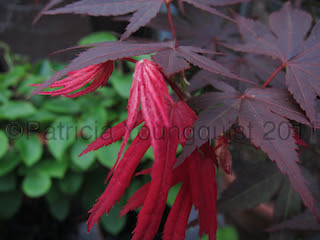