"Cows, Bread and Autism", Bobolink's Answer To What's Cheese got to do with it? 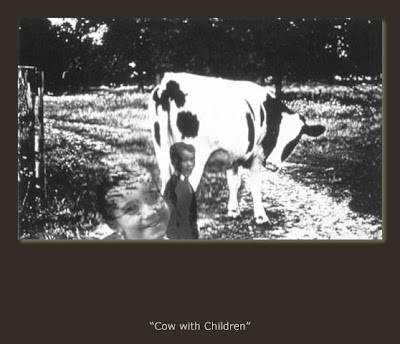 Last Saturday, June 18th 2011, I left you dear reader, with photographs of mouth-watering cheeses, (known as Drumm and Very Special Cave-Aged Cheddar respectively), and a promise to tell you a little bit about them as well as discuss the folks that make them in today's post. So, without further ado:
I have always liked cows and goats, but having had severe allergies since childhood has caused me to admire them from afar. However, once upon a time, after being given allergy shots, I was able to get close enough to some grazing cows and photograph them, and one of the resulting images was my photographic print, Cow with Children, as seen in the first image at the top of today's blog post. This image has also been rendered into a greeting card and both are available for purchase via my web-site.

Fortunately, my allergies stop with where these animals graze, and I am able to indulge in the cheeses they produce. "You have a friend in Cheeses," (a play on words of the old time hymn, What a Friend we Have in Jesus), is a "slogan" on "base-ball-style-caps and T-Shirts that a cheese shop in the West Village of New York city sells, and today's blog post explores, a "friendship" related to cheeses which has evidently given Jacob ("Jake") White a lease on life. (More on this later.) Jake is the son of Nina and Jonathan White, who are cheese makers at Bobolink Dairy, a business that now includes rustic bread baking, and a business that they have named for the spirited bobolink song bird whose image is imprinted on the labels they use when wrapping cheeses (this can be seen in the photograph posted below) that they sell at a Greenmarket that serves Tucker Square in the Upper West Side of New York City (where I live) on Thursdays and Saturdays. 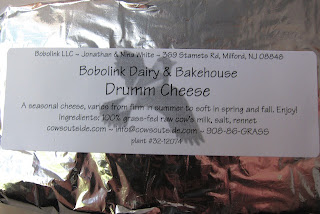 The Whites also sell their delicious products at other greenmarkets in New York City, and New Jersey (where their farm is located), as well as via their web-site, cowsoutside.com ,but it is the Tucker Square location, where I first met Nina White, pictured in the photograph posted below, where she can be seen holding a sign that usually is propped up on a table where she sells the yummy cheeses and breads. 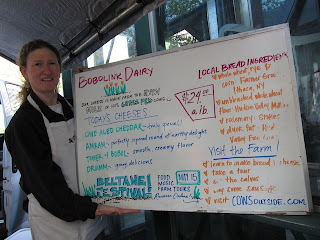 The cheeses are seasonal, and the ones being offered at this time of year are Drumm, Very Special Caved Aged Cheddar (again both of those were pictured in last Saturday's blog entry, the other two being offered as of today's posting are Armram and Tower of Bobol as noted on the left-hand side of Ms. White's sign and pictured below respectively. 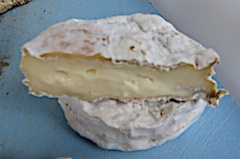 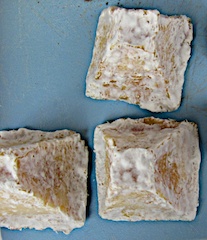 On the right-hand side of the sign, the Whites give a shout out to local growers whose ingredients they use in their bread. Local is right. Some of the growers that are mentioned also sell their products at Tucker Square. This year round  outdoor market is "the gateway to the Upper West Side" and, as per their web-site, I can attest to their fine offering of "seasonal vegetables" that "range from fresh staples to certified organic and Mexican specialties". The orchards represented at the Tucker Square Greenmarket, "boast sweet berries, stone fruit and over eighty varieties of apples." On many occasions, there are cooking demonstrations which offer unusual recipes and tastings, hence, this market is a great haven. And, like the folks who give the cooking demonstrations, Bobolink Dairy is very gracious in giving tastes of their unusual, distinctive cheeses, as well as making recommendations on what other foods would go best with the cheese of one's choice.

A unique thing about Bobolink is that not only do they offer tours of their farm, but they have internship programs which from what I've heard (straight from the mouth of an intern who moved from Oregon to the east coast to intern with the Whites) are empowering. The Whites are no strangers to the relationship between cows, cheese-making and baking, and empowerment, for these things have had a profound effect on their son Jake. As I mentioned earlier, they have given him a "new lease on life" — and a much needed one at that, for Jake, the eighteen year old son of the Whites, is autistic. I understand that "while he is quite intelligent, he has very limited speech capability, equivalent to a typical three year old." and that he is "very outgoing in matters that engage him" which apparently are "cows and baking".

Their web-site states that "Jake seems to have a particular affinity with cows, and cows seem to respond well to him." As I read this, I thought about my image, Cow with Children (mentioned earlier in this post), an image that was created long before I had heard about Nina and Jonathan White, or tasted cheeses from their farm, Bobolink Dairy, and I thought about the unconditional love between cows and children, an observation not lost on the Whites, who also  indicate on their web-site that, in terms of Jake, the love from child-towards-cow is reciprocal: "hey they {the cows} don't even know that he has a speech handicap".

Jake's passion for "kneading, baking, and most importantly eating baked goods" is the impetus for the Whites' recent move to a new farm. They write, "We hope to make a bright future for Jacob. In {our} extensive collection of old dairy and farm books, there are many photos of people working on farms and in cheese factories, who appear to have one learning disability or another."

The Whites take this one step further saying, "one photo that particularly comes to mind is of a young man in perhaps the 1950s, with biceps like Popeye's, operating a manual cheese press. His bright eyed, proud and smiling face belies the markers of Down's Syndrome, although their is no mention of it in the text. This young man had a good job and was proud of it. Nowadays, a Down kid or someone like Jacob is more likely to have a job putting parts in a bag on an assembly line. Agriculture and food production, in simpler times, had more room for people with disabilities. As modernity has taken its toll of the quality and flavor-fulness of food, it has also eroded the opportunities for those of us who are different."

"So, wish us well as we set out to set it right", the Whites ask. And so, with this post, I do wish the Whites well in their endeavor, for as you know dear, reader, I suffer from Neurofibromatosis Type-One as well as Legal Blindness, and  have written about this in posts which you may refer to by clicking here and here as well as here.I am painfully aware of attitudes towards disability — a word I would like to see changed to challenge. Physical challenged as opposed to disabled. Disabled is what they call stalled cars as well as stalled tractors, trucks, busses and trailers. "Disable it", is what techies and geeks tell you to do with a program in your computer when it is not functioning properly.

My afflictions are mild compared to many folks, including some whom I knew personally including, Colleen Ormond, who died in November of 2010 from complications of her hydrocephalic condition, and my dear friend KM, who died last week after a long battle with near blindness and multiple sclerosis. (You may recall that I mentioned KM in a couple of posts this past May that you may refer to by clicking here and here (when I wrote about one of her sister's passing and now she too has passed away).

The Whites, in their unique attempt to give their son an opportunity to be the best that he can be, remind me of the mother of the dearly departed Jennifer Mahoney (who was born with Spina Bifida, and who died in an accident with her wheel chair, a fact that you may recall, dear reader, because not only was Jennifer an inspiration for my photographic work that was acknowledged by the American Printing House for the Blind, but she is someone that I have written about in a blog post which I referred to in a blog post that you can access here),  Mahoney's mother, as you may recall, spoke to me at her daughter's funeral and of her keen desire to let Jennifer live the fullest life possible, saying "I always knew that I was on borrowed time with Jennifer."

And so as I conclude today's post, I hope you will indulge me in re-posting the image of Jennifer, 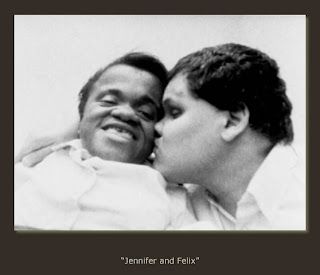 who embraced life, but realized attitudes were the disability, and did not hesitate to voice her position, leaving a legacy at Hunter College where she was receiving her education before her untimely death. Now, perhaps, Jacob ("Jake") White —even with limited speech — will be able to leave a legacy through his work on the Bobolink Farm, which not only produces great cheeses and amazing breads to feed the body, but provides opportunities to nourish the soul and confidence of the physically and mentally challenged.