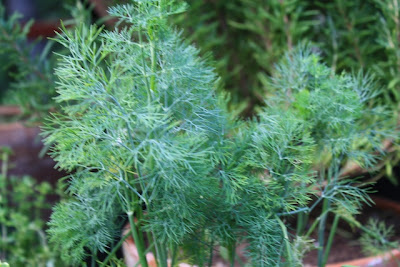 Like parsley and fennel, dill (Anethum graveolens), is a member of the Umbelliferare family, known for its distinct umbrella-shaped inflorescences.

I grow  Anethum graveolens, and it is truly an exquisite addition to my garden. It is wonderful to use in  homemade soups, scones, and in cookies.

However, I confess that I rarely use it for such purposes because like my Tropaelum majus (Nasturtium) and my Strawberries, (plants that I have discussed in previous posts which you can refer to by clicking here and here respectively), I often find  the beauty which it adds to my urban terrace garden, keeps me from cutting it.

I have just recently learned that dill "regularly appears under the misnomer 'anise' throughout the King James version of the Bible", and, that "confusion has continued to be perpetuated partly because botanists and zoologists were not part of the team of transcribers of this authorized interpretation; and so the apricot that Adam and Eve ate became an apple, the crocodile became a whale, the bull became a unicorn and dill became anise."

My source on this trivia is credited to Abbie Zabar who included it in her book, The Potted Herb, a delightful read with beautiful drawings.
Posted by The Last Leaf Gardener

Email ThisBlogThis!Share to TwitterShare to FacebookShare to Pinterest
Labels: Dill, My Rooftop Garden, Nasturtium, Plants in Culinary Use, Strawberries