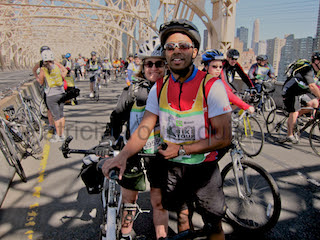 And I am not alone in feelin' groovy, according to You Tube,"some guy was walking down the street around 59th﻿ street and he started whistling 'the 59th street bridge song', and some guy behind him started whistling along with him, and that guy was........ Paul Simon."

With thanks to Zoe Waldron for loaning Captain Max Osso (pictured here with yours truly) on the Queensboro Bridge, (also known as the beloved Fifty-Ninth Street Bridge) which provided the inspiration for Paul Simon's song, The 59th Street Bridge Song (Feelin' Groovy).

According to Bike New York, "The Queensboro Bridge was opened to traffic one hundred and two years ago, in 1909 (and) this cantilever bridge spans the East River between 59th Street in Manhattan and Long Island City in Queens, and offers views of Manhattan, highlighted by the Empire State Building, the Chrysler Building and the United Nations. The bridge has two decks and a total of nine lanes (four upper, five lower) plus a bike/pedestrian path. {It is 3,724 feet to get to the other side on the Tour's Route}.


The ride was wonderful in spite of a "traffic" jam that lasted over an hour on the BQE as captured by a stoker, Scott Sheppard in the photograph below: 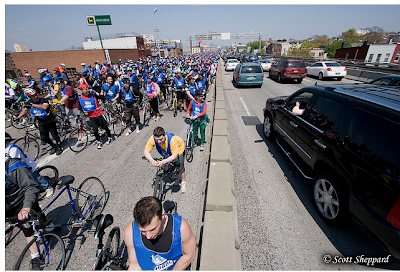 Standing for over an hour on the BQE, and longer than that while waiting to board the Staten Island Ferry, you could hear very little complaining (despite the posts on the Internet about many of the Five Boro Bike Tour's jams); anyone who had done the ride during raining weather was just grateful for clear skies and that no terror threats darkened our day.

Once again thank you Achilles, especially to James Newcombe, who encouraged me about alternative arrangements when Zoe had to cancel (hope to ride with you one day, James), and also to Carol Hopper, who did a great job in preparing everyone for the ride, and who made an out-of-the-way trip both to my apartment and a trailer in Central Park where bikes are stored when last minute alternative arrangements had to be made in order for me to participate, also thanks to Zoe Waldron for the use of her Burly Tandem, and of course, many thanks to Max Osso, for being my captain. All of you should be feelin' more than groovy about the good that you do.

P.S. Thanks also to JT (Joan Tedeschi) who filled in for me at "The Home" where I do volunteer work on Sundays as I indicated in a couple of blog entries (which can be found here as well as here) earlier this month.

And thanks too to my urban garden herbs, pants, shrubs and trees for accepting the watering I gave them in the wee hour of the morning (before I left my apartment to meet my captain Max), and for holding out a few hours on the second and third watering they usually require, my watering them, it was great to come home and see them thriving as evidenced in the photograph taken this morning and posted below.