I am still thinking of the lyrics posted above this blog entry that are from a well-known song in Camelot.  (I posted the lyrics to it on May 1st.) Consequently, what a nice surprise to go out on my urban terrace garden this morning and find this little guy, my first peony flower of this season, from my Paeonia suffruitcosa (Tree Peony) as seen in the photograph at the top of this post.

The peony flowers are appearing much later this year than last, but it appears that they will be just as lovely.

As you may recall, last spring my Paeonia suffruitcosa (Tree Peony) flowered in April, and provided the inspiration for many posts including, The Peonies Are in Bloom Again, posted on April 24th, 2010, as well as earning the bragging rights for being featured on the back page of my downloadable brochure, where I feature selections from my line of invitations that preserve moments in time, event program covers that enhance any occasion and greeting cards that are about more than communication in both venues.

Today's peony, which appears to be playfully peeking out on to my garden, is especially precious: a nice sign of life and hope for me, after having attended a funeral Mass yesterday for Ms. MH, a sister of a dear friend (KM) of mine who has very advanced multiple sclerosis, is legally blind, and was recently moved (not her choice) from her apartment — which she loved — to a nursing home on the Upper Eastside of New York City.
Although KM has severe health issues that have rendered her wheel chair bound and unable to see much of anything physically, she still managed to find joy in listening to music, and was always on top of every breaking (and non-breaking) news story. However, for now, KM is not on top of the "breaking news" story of her sister's death, because her surviving sibling, and other family members, have decided not to tell KM, that her sister MH has died.Although, it is none of my business, the family's decision to not tell KM of MH's death, and their request to me that I do the same, has deeply disturbed me. While I hate being the bearer of bad news, I abhor harboring secrets, and I am not sure how I will be able to visit KM — until she is made aware of what has happened. I don't want KM to feel that I conspired against her if she finds out I knew and did not let her know.

I was put in this position as a child by my father and his wife — in different circumstances — with the same "don't tell" rule. After moving out of the family house to be with (and to eventually) marry his secretary, my father and his wife adopted her grandson, Eric, and raised him as their own, a generous act (given that the child's mother wanted to pursue endeavors other than motherhood) that became a dark secret when they forced other family members to keep the fact that their son was adopted confidential. My father's hold over me on this matter was that the few times that he did visit would be taken away, and so because I wanted to see my dad, I kept the secret but never felt right about it during the times I was in Eric's presence.

The truth about Eric's being adopted came out nearly sixteen years ago, right after my father died, when his wife had an argument with him in which she retaliated by telling him about his adoption and that she was not his mother — but that her daughter — the woman he had believed was a sister — was his mommy.

Admittedly, this was an awful way for Eric to find out the truth of his past; however, the secretiveness in the grandparents- raise-a-kid-as-your-own (including let the child think its mother is his sister) is not uncommon. In fact, the actor Jack Nicholson was raised by his grandparents and told that the woman (who was his birth mother) was his sister. Nicholson only found out about his past when "a journalist for Time Magazine, who was doing a feature on Nicholson informed him of the fact. By this time, both his mother and grandmother had died."

Evidently Nicholson has not chosen to pursue the matter of finding out about his real father, and I don't know what Eric has done as I have not seen Eric or my father's wife since my father's funeral, but I do recall while at my father's funeral that I was wondering how would Eric feel towards me for keeping this matter secret? And yesterday, at MH's funeral, I could only imagine the betrayal KM might feel if she knew that I had knowledge of her sister's death when she knew nothing of the matter.

I am sure the surviving members of KM's family have made their decision out of what they perceive as love and protection, but who are they protecting really? Themselves because they may not be able to cope with KM's grief? Or KM who is very depressed and has not been eating much of anything since she was moved against her will into a nursing home?

"Blessed are those who mourn, for they shall be comforted " is a promise made in the faith both KM and I practice (a faith that the deceased MH also practiced actively). KM may have lost the use of her limbs, and most of her eye-sight, and now her apartment, but she has not, has not, lost her right to mourn.

A sensitive subject, I realize, dear reader, but I certainly welcome your thoughts on it but will leave you with a more promising thought, or at least promising image and here is what it is: whilst I was writing this post, my early morning peony opened up and embraced the day, providing some comfort, as promised, for those who mourn. (Check it out below); 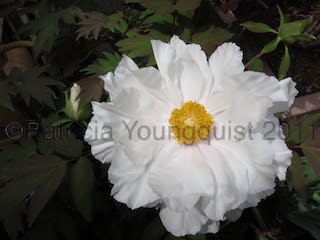