"Yesterday's on tape, we go on from here" (The Wisdom of Susan Lucci) 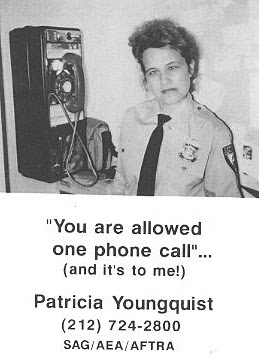 Last week it was announced that after "decades on the air", the soap-operas, One Life to Live and All My Children were being canceled — not  a surprising piece of "news", given the fact that As the World Turns, the longest running of the three, was cancelled in 2010. I worked on all three of these shows and referred to my experience with the latter in a previous post.

Although my roles were only "under-fives", I did receive some notoriety for them, in terms of being recognized for my brief appearances, while walking down the streets of New York City, where I live.

As a child, soap-operas (unfortunately because they were watched instead of participating in physical activity and family bonding), were a big part of my family life, where often the television had more important things to say than we did — hence it was constantly on, ruling the conversation. Consequently, the characters on the soaps became family to me which is one reason that I was delighted when I first appeared on One Life to Live  (O.L.T.L.) playing a customer in a cafe´, and then as a nurse in my first under-five role. I was petrified to say the line,"Excuse Me", because it was being used in a scene in which the characters, Vicky and Clint (who had been so much a part of my life without knowing it), were having an intimate conversation, and I was very nervous about interrupting their scene: Was anyone ever this young?


In any event, my survivor instinct crept in, reminding me that my voice needed to be extremely audible for the line to heard on tape, a condition that needed to be met in order for me to get my S.A.G  (Screen Actors Guild) card, as I was only a member of A.F.T.R.A.  (American Federation of Television and Radio Artists) and A.E.A. (Actors Equity Association) at the time. During those days, having a S.A.G. card seemed like a rite of passage, a rite of passage to being cool and admired, so my stakes were high in having that line heard. Therefore, with my nurse's uniform and cap intact, I sucked my stomach in, and marched in between Vicky and Clint saying, "Excuse me!", and then for good measure, I said "Excuse me!" once again. Soon after the scene was completed, I hurried over to Erika Slezak, the woman who played Vicky, and I meekly told her that the director had asked me to interrupt the scene. "I know dear," she grunted. I then asked her if she heard my line and she replied, "Yes dear. Two times . . . "

I was thrilled to get my S.A.G. card, and to return to other "roles" on O.L.T.L; including one as a prison guard, as seen in the photograph of yours truly posted at the top of this entry. I had my picture taken soon after we taped the scenes, and I purposely stood near a telephone, knowing I was going to place the words,"You are allowed one phone call (and it's to me)" as a caption under my photograph and include my union affiliations, then create cards to use to send to agents and casting directors in an effort to procure auditions and book jobs. (See, even in the olden days I liked to make cards that were about more than communication, a philosophy I've expressed in previous blog entries. I confess that I enjoyed making those cards to be considered for jobs more than the job itself, for, if truth be told, I am not an actress type, and I much prefer other aspects of production, such as set design, location scout, script reader, etc; but I was in such a need to be  validated during those years, and thought being on-camera and a S.A.G. member was the only way to achieve it.

Basically those years were miserable and bubble-bursting, including a time I played a prisoner for All My Children (A.M.C.), in scenes with Susan Lucci (Erica Kane), over ten years ago. During the time I worked on those episodes I was in a painful (and very bad) relationship, my father had died, I was in danger of losing my apartment, my hours had been cut at a job that I held at Hunter College, and I had what appeared to be a cancerous growth and was awaiting test results, a "real life prisoner" not just one in Pine Valley.

The set was always tense in the studios on West Sixty-Sixth Street, and many times it was with an one-upmanship. I clearly recall a scene where Erica Kane was being visited in prison and, as the scene ended, she kissed the man. "CUT! CUT", a stage manager roared, barking orders for a scene with no kissing. "You are in prison and not to be kissing anyone," he scolded Lucci. Ms. Lucci immediately called the producers, personal assistants, and writers down to the set and explained to them that the stage manager of the day had not worked on previous scenes, including one that had happened the day prior to this taping, when she had kissed the man. Lucci went on to say that her viewers would be upset if she kissed the man on on day but not the next. Upon being scolded for kissing the man in prior scenes, Lucci replied,"Yesterday's on tape. We go on from here ."

Now, with the cancellation of A.M.C., I am certain for Susan Lucci (given all her bravado) that she will go on from here, and her quote is probably good advice (though coming from a seemingly very self-involved person) for all: "Yesterday's on tape, we go on from here."
Posted by The Last Leaf Gardener

Email ThisBlogThis!Share to TwitterShare to FacebookShare to Pinterest
Labels: All My Children, As the World Turns, Erika Slezak, NYC, One Life to Live, Susan Lucci