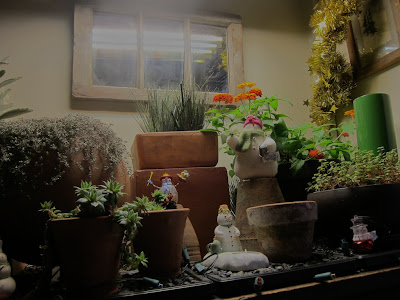 This morning I was having a real where-to-turn moment when I spotted some flowers in an array of colors (a lovely orange, yellow, red and pink) that had come up quite unexpectedly from my Lantana camara, which is on the top the armoire in my kitchen where it is making its winter home with some of my succulents.

My armoire — a family treasure from before the 1900's — has served as a space for my plants from my roof extension garden that need to be brought inside during the winter season, while the others remain outside wrapped to protect them from the harshness of the season as I've stated in previous posts. I've grown varieties of Lantana in my urban roof extension garden over the years —  especially in my early days as a gardener — before I moved on to other types of plants and shrubs.
The Lantana camara that I have inside in my kitchen was placed there on the advice of Juan V, the gardener extraordinaire who I have referred to in previous posts. It is a plant type that was initially suggested by a hair stylist, who was an avid gardener, because it could tolerate the heat and sun  — which I have a lot of during the summer months in my garden. I enjoyed many varieties of Lantana, in many locations in my roof extension garden, during my first few years as a gardener, but as I got into the beauty of texture and the patience perennials foster, I grew out of my need for the instant color that the varieties of Lantana provide, and I no longer had them in my garden.

I did not miss the constant dead-heading that they require, but last summer, while walking down Columbus Avenue, I spotted a needy-looking Lantana underneath the table of a street vendor, and I took it home — to my roof extension garden —in hopes of reviving it. I had long  accepted the fact that co-dependency and plants do not work, that  the growing conditions for plants are what they are, and while I can nurture them and give them good care, I cannot make them thrive if they don't have the exposure or are put a zone that does not meet their requirements. In the case with Lantana, they have aways thrived in my garden, so it was a good bet that the bedraggled one I saw on Columbus Avenue could be revived.


Indeed my Columbus Avenue find the, Lantana camara, came back to life producing orange, yellow, pink and red flowers.  Several weeks later, when Juan V and I were wrapping my herbs, plants, shrubs and trees for the winter, he suggested I bring the Lantana inside. In the past I had not attempted to bring any of my Lantanas inside and had just acccepted the fact that they were annuals, but when Juan V told me that one of his clients had success with Lantanas as house plants I decided to try. Ever since I brought it in, I've had nothing but foliage — not a pretty foliage — and no flowers at all, so seeing the precious flowers this morning revived me as I had revived the neglected Lantana, and served as a reminder that, since spring is on its way, my moments in seeing unexpected buds and flowers are just beginning.
Posted by The Last Leaf Gardener