Sansevieria trifasciata and Other Delights in Tony's Garden 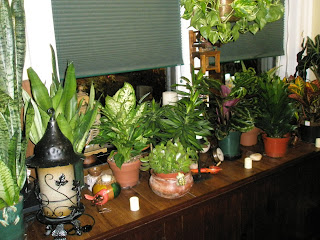 Even though Phil and Chuck, the respected northeastern groundhogs did predict an early spring, it is still winter — mid winter — and although the temperature in the New York City area where I live is predicted to reach near sixty degrees by the end of the week, my urban gardener-comrades  and I will continue to give our respective outdoor gardens (and ourselves) a much needed rest.

However, indoor gardeners, such as Tony (whose luscious succulent garden can be seen on a window-sill facing Seventy-Second Street in the Upper Westside of New York City and is  the subject of the photograph posted above) continue to find exciting opportunities in maintaining a succulent garden. His succulents vary widely in form, texture, and color mirroring his design potential. At the moment, his Sansevieria trifasciata (Mother-in-law tongue/ Snake plant) stands proudly (as seen in the left corner of this photograph) and seems to watch over the succulent community around her as a lioness would watch over her cubs. Tony's garden exudes the warmth and wonder of exciting places like North Africa, Australia, and Yemen — a much needed respite in the bleakness of winter.
Posted by The Last Leaf Gardener