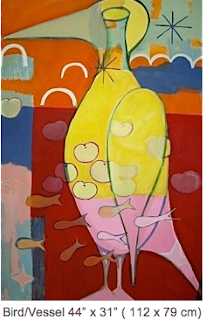 New York City dwellers who own and maintain urban gardens (such as yours truly) are often artists and tend to find each other by happenstance, as was the case when I met Cecilia Kalomeris, an urban gardener and fine artist  (known as Cecilia Abs André), who lives a couple of blocks north of me. I had admired a postcard that featured her painting, Bird/Vessel (a photograph of the painting can be seen above). Cecilia had used the postcard as an invitation to an art exhibition of her paintings which had taken place several years prior, and when I met her we were both working on building projects in iWeb at the Apple Store on 67th Street and Broadway in the Upper Westside of New York City.
As we talked, we realized our appreciation for making art was not the only thing we shared, and one of those things was the fact that we both had apartments with outdoor spaces.

Mine a roof extension garden off of my fifth floor walk-up studio, hers a terrace garden off of a fairly large apartment in a luxury building with a doorman and an elevator. Both of our outdoor spaces have a Northern exposure which means we have similar growing conditions.

We met late last fall and then again in the early winter — at the end of the season for terrace gardeners — so I am looking forward to seeing her garden flourish this spring, and when I do, I will share it with my readers. However, upon seeing her outdoor space when we first met, I was very moved by the fact that her daughter had contributed to the Kalomeris's garden by making a painting on one of the panels in between the rod-iron railing that surrounded their terrace and calling it The Kalomeris's Garden.


This painting adds such delight to the garden. and it reflects the warm and creative nature of the young artist's (Elisabeth) mother, Cecilia. It is especially nice when gardens become family affairs and the influence remains throughout all the seasons.
Posted by The Last Leaf Gardener